“A Christian Ending to our Lives..”

Before dawn on Saturday 27 February 1915, with his family at his side, the saintly Bishop Raphael quietly passed from this temporal life and gently slipped into eternity.  His funeral, which lasted over a week, was described as ‘a wonderful service, picturesque in setting.’  Indeed, nothing like it had ever been experienced among the Orthodox in America up until that time.

At the Divine Liturgy the next morning Fr. George D. Maloof prayed the Trisagion service for the repose and eternal memory of his beloved Bishop. Following the service, Fr. George led his parishioners from St. George Church at 32 Hudson Street and proceeded to South Station where they boarded a train for Brooklyn.  Staying with family and friends, they remained in New York throughout the week, their numbers growing as more parishioners joined them each day.

The following account was written by Isabel Hapgood and appeared in the New York Tribune on 8 March 1915. It is the most complete surviving description of the funeral of St. Raphael, who died on February 27, 1915. Hapgood herself had known St. Raphael for nearly two decades, from the time that he first arrived in America.

“The first Syro-Arabian Bishop in America was buried yesterday in a tomb beneath the Syro-Arabian Cathedral of St. Nicholas in Brooklyn, which forms his monument.  Bishop Raphael died, after an illness of three weeks, from dropsy, kidney trouble and heart disease, worn and gray as a man of seventy with his toils and sufferings.

For a week he lay in state in his cathedral, and morning and evening requiem services were held by the Right Rev. Alexander, Bishop of Alaska, assisted by Russian and Syrian clergy. A wonderful service, picturesque in setting.

Across the foot of the open coffin was draped the purple episcopal mantle, with its crimson velvet “tables of the law.” Over the face lay a sacramental veil of white and silver brocade, embroidered with a gold cross. At the head of the coffin stood pontifical candles, but no longer lighted, as during pontifical service. They were tied with black ribbons, so that their tips spread abroad, reversed and unlighted. Between them, leaning against the head of the catafalque and the coffin rose the crozier. Behind, on a folding lectern, lay a purple velvet cushion, on which were placed the orders and decorations which the Bishop had received, many from Russia. The holy doors in the centre of the iconostasis, with its many icons, were closed and draped in black and gold, purple and silver. All about the walls were more icons, and huge floral pieces surrounded the coffin. One of the set pieces was an armchair, of white artificial flowers, with sprays of lavender flowers and surmounted by a canopy or arched gateway of palms, violet tulle and white flowers.

At the evening requiems the church was always filled. Many women waited for hours to secure front seats in the little gallery. More women thronged every step of the stairs. The Syrian priests, in passing, kissed the dead Bishop’s hand, after kissing the cross. The Russian Bishop and priests passed without saluting cross and hand.

The gospels were read night and day, instead of Psalms, as with a layman, by relays of clergy. The Syrians relieved one another at frequent intervals, and showed the finest, most varied forms of intoning.

Bishop Alexander who, by command of the Holy Synod, has charge of the vast Russian Diocese of North America until the newly appointed Archbishop shall arrive, stood at the services motionless (“like a candle” is the Russian term.)

Thursday evening, at the close of the services, a picture was taken of the dead Bishop and the circle of celebrating clergy. After the clergy had retired, representatives of all the Syrian societies, including women, made addresses from the chancel platform about the great work which Bishop Raphael had accomplished for his people in America. 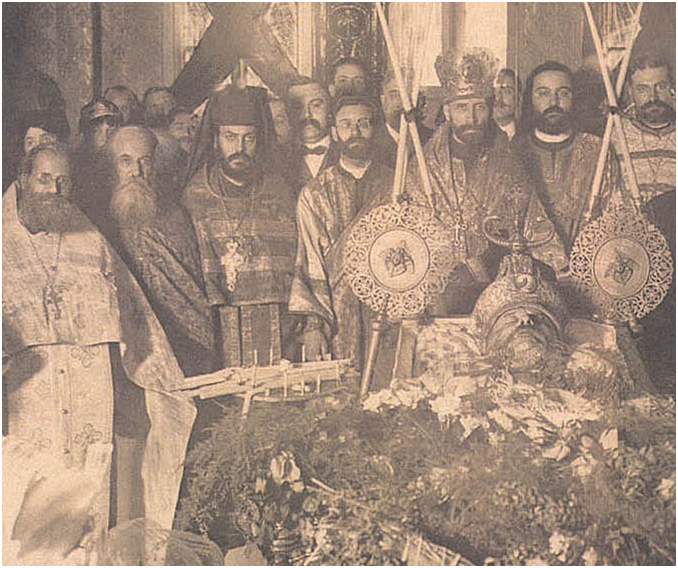 *[The photo accompanying this article shows our founder, Fr. George D. Maloof – 2nd person from the left – standing with fellow clergy at the casket of St. Raphael.  Fr. George was among the priests who read the Gospel at the vigil, served at the funeral liturgy and accompanied the body of his bishop to his tomb.  Members of St. George parish were part of a band – the Hudson Street band – that played and marched as the casket of St. Raphael was processed through the Brooklyn neighborhood. Parents brought their children from Boston to witness the historic event.  Many of the children sang in a specially formed children’s choir.]

Saturday morning, after the liturgy had been celebrated in Old Church Slavonic and Greek by Bishop Alexander and his clergy, and in Arabic by the Syrians, while the choir of the Russian Theological Seminary from Tenafly, N.J., sang their part in Slavonic, two requiem services were held, the first by the Metropolitan Germanos [Shehadah] of Zahle, Mount Lebanon, Syria (his black, waist-long hair concealed beneath his black cassock and cloth of silver pall) and the Syrian clergy; and the second by Bishop Alexander and a few Russian priests, the seminary choir singing. The Syrian clergy no longer kissed the dead Bishop’s right hand. That lay at rest forevermore. The raised left hand supported a large cross, and this alone was saluted.

Yesterday morning, at 10 o’clock, the liturgy was celebrated by Bishop Alexander, standing at the right of Metropolitan Germanos, on their eagle rugs upon the dais at the head of Bishop Raphael’s coffin. As was customary, Bishop Alexander was vested on the dais in magnificent vestments of silver brocade. Metropolitan Germanos wore gold brocade and the tall Metropolitan’s mitre of crimson velvet and gold, from whose crest rose a diamond cross. The choir of the Russian St. Nicholas Cathedral sang, except during the brief intervals when the Syrians chanted.

At a layman’s funeral the clergy wear black velvet and silver; at the funeral of a priest or bishop, no mourning is worn and the flowerlike vestments of the priests, mingling with the magnificent floral pieces, produce a very brilliant effect. The Syrian deacon wore pink brocade with a stole of blue and gold. As only 500 people were allowed by the authorities inside the cathedral, there was space for the ceremony of processions to and from the altar. At 12 o’clock the liturgy ended. At 1:30 the funeral began.

The singing was now done for the Syrians by the boys’ and girls’ choir of the Sunday school, wearing white vestments with lavender crosses, the girls, with mortarboard caps, occasionally assisting the clergy. The Russian singing was done by the clergy, assisted by the adult members of the choir. In all there were about forty priests, Russian and Syrian, who chanted, the Russians led by Archdeacon Vsevolod, of the Russian Cathedral, with his magnificent voice.

Among the hymns, which show the spirit of the service, were:

“Give rest, O Lord, to the soul of thy servant and establish him in Paradise. Where the choirs of the saints, O Lord, and of the just, shine like the stars of heaven, give rest to thy servant, who hath fallen asleep, regarding not all his transgressions.”

“Forasmuch as we all are constrained to that same dread abode, and shall hide ourselves beneath a gravestone like to this, and shall ourselves shortly turn to dust, let us implore of Christ rest for him who hath been translated hence.”

In the Eastern Church there are several orders of burial. One is for a child under seven years old, in which no mention is made of sin, because a child’s soul “is not grown,” as the Russians say, until he is seven. Another is for adult laymen; a third, for those who die in Easter week, in which there are almost no songs of mourning, but all are songs of the joy of the Resurrection; the fourth, for dead priests, has five epistles and five gospels. These were read by the Syrians and the Russians alternately, as were the many hymns, most of which were written by St. John of Damascus.

Then at last the clergy made addresses, Father Basil Kerbawy, dean of the cathedral, Father Sergius Snegyeroff and others, in praise of the Bishop. Father Kerbawy reduced the congregations to tears. Bishop Alexander made the last speech, directly addressing the dead as he stood by the coffin.

After “Memory Eternal” had been proclaimed in Syrian and in Old Church Slavonic, with the addition of the Bishop’s title and name, the procession formed. It is customary to carry the body of a Bishop around the outside of the church and to hold a brief service on each of the four sides before going to the graveyard. This constituted the funeral procession in the present case, as its route was along Pacific Street to Henry Street, thence to State Street, then to Nevins Street and back along Pacific Street to the cathedral.

The dead prelate was borne in an open coffin by the priests, the snowflakes drifting down upon his splendid mantle of purple, crimson and white, his golden mitre, and the white brocade sacramental veil which covered his face. The body was followed by the Orthodox clergy, both Syrian and Russian; last came Bishop Alexander of Alaska. The family of the deceased, parishioners and friends followed, women joining, although it is not the custom to do so abroad.

Directly beneath the altar the Bishop had built for himself a vault. On the return of the procession masses of the flowers were carried into the crypt, and the clergy surrounded the bronze coffin into which the mahogany casket was lowered. The Metropolitan Germanos made the final address before the coffin was closed, and a most distressing scene of grief ensued. Not only the clergy, but many parishioners, cast earth upon the casket of their beloved Bishop.”

St. Raphael has a very special link to our parish of St. George of Boston.  In 1899, as a priest, he encouraged the early Syrian Orthodox immigrants in Boston to establish a community and prepare to receive a priest to lead and inspire them.  In 1900 he assigned the newly arrived immigrant priest, Fr. George Dow Maloof as the founding pastor of the community of St. George in Boston.  Over the next fifteen years he made numerous visits to St. George to bless and encourage the growth of the parish, to raise funds for the construction of a new church, to baptize children, to marry young couples, to bury the faithful departed and to teach and inspire the parishioners.  His ministry and his legacy are the foundation of our parish history.  This year we commemorate his blessed repose and every day we honor his memory and ask his intercession on behalf of our parish.  Through the prayers of our beloved father in Christ, St. Raphael, may we grow and prosper in His service.