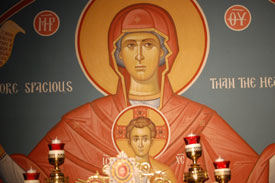 The icons in our church represent a range of several schools, periods and styles.  The older icons from our original churches in the South End are painted in a Greco-Italian style typical of iconography found in American churches in the early to mid 20th century.  These paintings tend to be more caricatured and pictorial using pastel tones that lack the vibrancy characteristic of traditional icons.  They are highly influenced by neo-Italian realism.   Most of these icons are from the church on James Street and were painted in the early 1950's.  They are now in our church-school rooms.  Two neo-Byzantine icons are at the candle stands in the vestibule; one is of Christ and the other is of Mary.  These two icons date from the 1920's and are from the church on Tyler Street.   Another icon of Mary found in the vestibule is painted in a Russian neo-Byzantine style and is from the late 19th century; it dates from the establishment of the church on Oxford Street in 1900.

The icons inside the church are from two distinct iconographic styles.  The icons on the iconostasis and in the dome are painted in the Byzantine style while the icons on the interior western wall are in the Russian style.  All of these icons were painted for the present church and they represent the revival of traditional iconography that took place in the mid to late 20th century.

The hands of several iconographers can be detected among these icons.  The Russian icons were painted by Patricia Reid of the New Skete community in New York.  The icons of St. George, Christ and the Theotokos on the iconostases as well as the Pantocrator and dome were painted by Constantine Youssis, considered the father of Byzantine Icon revival in North America.  The additional icons of the iconostasis were painted by Philip Koufes.  The Icon of the Sign behind the altar was painted by Gregory George.

One of the most distinctive features of our church is our stained glass.  The lower tier of windows depicts the twelve apostles.  These windows were made for the church located on James Street in the South End and reinstalled here in 1978.  The windows were made in the early 1950's by Carroll E. Whittemore Associates of Boston.  For nearly one hundred years, this firm was one of the most recognized masters of stained glass in the country.  Examples of their craftsmanship can be found throughout North America.

The British artist, William R. Jack was responsible for designing and painting the windows.  Mr. Jack researched and applied a traditional iconographic style to his windows.  He applied hand pigmented paint to the stained glass to enrich the color and dramatic nature of the icon.  Traditional symbols for each Apostle are part of the image; St. Peter, for example, holds the keys to the kingdom, St. Andrew a traverse cross, St. James a pilgrim's staff and so forth.

The windows are made from the finest quality imported and domestic pot-metal glass.  The technique employed in their manufacture is identical to that used in 13th Century European Cathedrals.  In addition to the Icon of the Apostle, each window has a panel symbolizing a Sacrament of the Church or select symbolism from the Old Testament.  Carroll Whittemore is the author of an important reference book on Christian symbolism, ‘Symbols of the Church', which is widely consulted by ecclesial architects, artists and designers.

The windows of the upper tier depict the Major Feasts of the Church.  These windows were also made by Carroll E. Whittemore Associates and installed for the present church in the early 1980's.  Like the older windows these too are made of high quality pot-metal glass with painted highlights.

St. George Church is located on the former estate of Rev. Harold G. and Helen Arnold.  Rev. Arnold was the pastor of the Theodore Parker Unitarian Church on Centre Street, West Roxbury, from 1913-1948.  The Arnold's resided at their Emmonsdale Road property for over 60 years. The parish purchased the Arnold Estate in 1977.

Helen Arnold was an author and literary critic as well as a respected horticulturalist, especially noted for her work at the Arnold Arboretum, with which there was a family connection.  The Arnold Arboretum was established in 1872 when the trustees of the will of James Arnold (1781-1868), a whaling merchant of New Bedford, Massachusetts, transferred a portion of Arnold's estate to the President and Fellows of Harvard College. In the deed of trust between the Arnold trustees and the College, income from the legacy was to be used "for the establishment and support of an arboretum, to be known as the Arnold Arboretum, which shall contain, as far as practicable, all the trees [and] shrubs . . either indigenous or exotic, which can be raised in the open air." The Arnold Arboretum occupies 265 acres of land in the Jamaica Plain section of Boston. 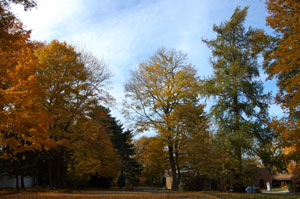 Helen was the U. S. representative to the Bronte Society for 22 years and editor of the Emily Dickinson Yearbook. She was active in the ‘Lend A Hand' Society of Boston and a lifelong friend of Helen Keller.

In 1952, she and her husband received a bronze medal from the Massachusetts Horticultural Society for the restoration of their gardens on Emmonsdale Road.  The current site of St. George Orthodox Church retains many features of the prize winning gardens created by the Arnold's including several rare and exotic trees of North America and eastern Asia including Fagus (beech), Lonicera (honeysuckle), Malus (crabapple), Quercus (oak), Rhododendron, and Syringa (lilac).  The parish is proud of its grounds and continues to honor the legacy of the Arnold family by conserving and caring for these majestic trees and shrubs.