Our parish was founded in Boston's South End in 1900 by newly arrived immigrants from the Middle East.  The new community placed themselves under the patronage of St. George the Great Martyr.  Desiring to maintain their Orthodox Christian faith and heritage they established themselves as a parish of the Syrian Orthodox Mission of the Russian Orthodox Church.   Under the spiritual direction of Bishop [now Saint] Raphael Hawawini communities of Arabic speaking immigrants throughout North America were constituted as Orthodox parishes.  St. George of Boston is proud to be one of the first of these pioneering communities with a direct link to the illustrious missionary and hierarch, St. Raphael of Brooklyn.

In 1900, Father George Maloof of Deir el Ghazelle arrived in Boston to serve the newly formed Orthodox community.  Fr. George established the Chapel of St. George in his home at 6 Oxford Street and the community began to grow and prosper.  As the Orthodox population increased the community moved to a larger facility at 38 Edinboro Street and then to 32 Hudson Street.  Fr. George created a Parish Committee of elected officers and members representing the towns and villages of the new immigrants to assist him in guiding the parish.

The first elected officers were Rizalla Samaha, Jacob Nimr, Saba Jadoun, Gabriel Mansour and Elias Maloof.  Fr. George saw that a Ladies Society was created to assist the growth of the community through education and fund raising.  In 1916, Fr. George the Parish Committee and the Ladies Society solicited funds for the building of a new church.  That year property was purchased at 154 Tyler Street and a building program was undertaken.  Fr. George died in 1920 and his dream of a newly constructed St. George Orthodox Church was realized two years later.

Fr. Abraham Zaine served for one year following the death of Fr. George Maloof and he was succeeded by Fr. Elias S. Hamaty.  Fr. Elias guided the community through the building program and construction of the new church. Fr. Elias welcomed Metropolitan Germanos of Zahle to bless and lay the cornerstone of the new church in 1923.  The following year, Metropolitan Germanos returned to consecrate St. George Orthodox Church of Boston. Under the guidance of Metropolitan Germanos, the parish was officially received into the Greek Orthodox Patriarchate of Antioch. With the growth of the first generation of Orthodox in Boston, Fr. Elias established youth organizations to help insure the future of the parish.  In 1936 Archimandrite Anthony Bashir was appointed as the Patriarchal Vicar in America and consecrated Archbishop of New York and all North America.  St. George of Boston came under his jurisdiction.

Throughout the decades the parish continued to grow and prosper.  By the late 1940's the parish had grown to over 550 families.  During these 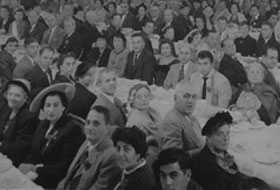 crucial years the parish was blessed with the expert leadership of several inspired priests including Fr. Stephen Upson and Fr. Nicholas Vansuch.  In 1953 the community built and moved to a new church on James Street in the South End. In addition to a new and spacious sanctuary, the new complex included a church school, social hall and living quarters for the pastor. Fr. Ilyas Kurban served the parish from the mid 1950's to mid  60's when he was elected as Metropolitan of Tripoli and Al Koura in Lebanon. Metropolitan Anthony assigned Fr. George R. George to serve St. George Church following the election of Metropolitan Ilyas.  Fr. George served here until 1977. Metropolitan Anthony died in Boston in 1966 and was suceeded by His Eminence Metropolitan Philip Saliba, the current first hierarch of the autonomous Antiochian Orthodox Church in North America.

Over the next two decades the parish grew and expanded into the Boston suburbs.  By the mid-1970, the demographic center of the community had shifted and it was time to consider relocating to the outlying area. The parish purchased the Arnold estate in West Roxbury in 1976 and construction of a new church complex began. In April 1979, Metropolitan Philip consecrated the present church.  In the late twentieth century increased immigration from Lebanon added to the diversity and character of our community.

Today, we are a parish of the Antiochian Orthodox Christian Archdiocese of North America under the omophorion of His Eminence Metropolitan JOSEPH in the ecclesiastical jurisdiction of the Greek Orthodox Patriarchate of Antioch.  Together with ten sister parishes in the area, we make up the Diocese of Worcester and New England under the Ecclesial supervision of His Grace Bishop JOHN.

Presently, St. George is a large parish of many members united in a common acceptance and expression of the Orthodox Christian faith.  The community is centered on the church where we assemble to worship God and celebrate our faith.  Our Sacramental and Liturgical life combined with our parish programs and organizations make it possible for us to effectively minister to a wide range of needs in our community.    As an Orthodox parish, our mission is to present, teach and live the Gospel of Jesus Christ in such a way that His light shines through us to the world around us.