For the Orthodox Church, the doctrine of the Holy Trinity underlies all theology and spirituality.  The doctrine of the Holy Trinity teaches that God is one being who exists, simultaneously and eternally, as a mutual indwelling of three Divine Persons: the Father, the Son (incarnate as Jesus of Nazareth), and the Holy Spirit. Since the Councils of the 4th century, this doctrine has been stated as "three persons in one God". The doctrine also teaches that the Son Himself has two united but distinct natures, one fully divine and the other fully human.

Salvation is both personal and communal and it implies sharing; there is a uniqueness and wholeness in the human person, in all humanity and in creation. The mystery of the Trinity is revealed in the Incarnation of the divine Son of God, the "Word that became flesh", assuming our humanity, healing us and restoring all creation. It is on the doctrine of the Holy Trinity that the polity and structure of the Orthodox Church rests.

When expressing her theology, the Orthodox Church looks for consistency with Scripture and Tradition.  Special regard is given to the 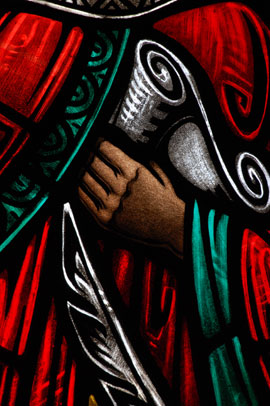 history of the Church and the teachings of the early Church Fathers.   In the context of a living tradition, the Church will also search for new formulations of her tradition in response to contemporary needs. The Orthodox Church seeks a living experience of the Faith accessible in the community of believers and the witness of the Saints. The Church is reluctant to define matters of faith with too much precision, in the firm conviction that truth is never exhausted. Her cautious approach to theology safeguards the transcendence of God while designating His immediacy; it also affirms the uniqueness of each person - divine and human - so that humanity is never reduced to anything less than a ‘mystery'.

The anthropology of the Church sees ‘man' as created in the ‘image and likeness' of the Creator.  Accordingly, we are drawn to a relationship with our Creator characterized by adoration and worship. The Orthodox Church experiences and expresses her theology most fully in the Divine Liturgy.  The Church is most authentically itself when it prays as a worshipping community. Hymns and music, incense and candles, gestures, symbols, art and architecture, bread and wine and oil - all convey the content of the Christian faith in a variety of ways, appealing to each person in a tangible way.

The chief characteristic of the Orthodox liturgical cycle is its emphasis on celebration and joy. Throughout the year, Saints are commemorated and Feasts are celebrated in order to make historic persons real and past events present. Celebrations are shrouded in imagery created by music, art, poetry and Scripture. There is a conscious desire to capture the heavenly beauty and to reveal this in the divine services.

Integral to the long history and tradition of the Orthodox Christian faith is the Icon.  The Church sees her attitude towards art as a further reflection of the divine glory and beauty. The Incarnation of Christ implies that God became fully human and therefore accessible and describable. Thru the Incarnation, God becomes both understood and seen. In Jesus Christ, we are able to look upon God.

Every Orthodox Church is appointed with icons depicting Christ, the Virgin Mary, the Saints and events from holy history.  The respect shown to the Icon is an outward sign of the veneration the pious believer holds for the person or event illustrated.  Icons are not objects of worship but images to be contemplated.  They are Christian faith and history depicted in art and they constitute part of the transfigured cosmos.

The Orthodox Church today numbers around 250 million people throughout the world. Geographically speaking, its primary area of distribution is in Eastern Europe, the Middle East, Russia and along the east coast of the Mediterranean Sea. Immigrants from these traditional Orthodox countries constitute a large Diaspora scattered throughout the world. In modern times, indigenous Orthodox Churches have emerged in Africa, Japan, China and Latin America.  The Church is comprised of several Patriarchal, self-governing and autonomous Churches. Our own Antiochian Orthodox Archdiocese of North America is a Self-Governing local Church. Orthodox Christianity is actually an international confederation, within which each local or national Church retains its integrity and independence. All Orthodox Churches, however, are united in the same faith and liturgy.

Today people tend to think of the Church as a vast, worldwide institution. A fundamental doctrine of the Orthodox Church, however, is that the concept of universality or catholicity is fully expressed in the local community. Each local parish is a Eucharistic gathering that reflects the wholeness of the ‘One, Holy, Catholic and Apostolic Church'.