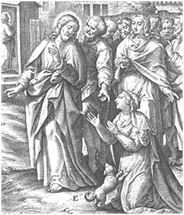 There’s a children’s story about a giant who was upset because some little kids decided to play in his yard. It was a lovely place full of flowers, fruit trees and birds. The giant’s yard was a happy place as the children sang and danced and played. The giant didn’t like the trespassers so he built a wall and put up a “No Trespassing” sign.

But divisions are not easily dissolved, and walls are difficult to tear down. For that reason, Jesus frequently addressed the separations that distinguished one person from another. Among his contemporaries, the Canaanite woman and her daughter, Zacchaeus the Tax Collector, the woman at the well, the Good Samaritan, the grateful leper, the Centurion and so many others would have been regarded as undeserving of God’s care and Jesus’ attention. They were supposed sinners. They were walled in by multipliable layers of prejudice, resentment and suspicion. But Jesus, who did not erect or respect such walls, saw them as God’s people and healed them in response to their sincere faith and hope.  We meet them in the Gospel each Sunday and see them as models for our own lives.

Now as we prepare for Lent it’s a good time to consider any walls in our own lives.  Whatever the reason for the origin of the walls, the results are often the same. As in Wilde’s story, a walled-in garden soon becomes a desolate place. To avoid this sense of loss and isolation, we might do well to remember the wisdom of John Chrysostom: “What wall, strongly built with well-compacted and large stones, is as impregnable against the assaults of the enemy as a united band of believers, joined by mutual love and sealed by oneness of mind?”

Blessings at the Half Way Mark in Lent,