Monthly Message from Fr. Timothy - September 2020: The Man on the Pillar

The Man on the Pillar

My introduction to St. Simeon the Stylite was when, as a college student, I saw the film Simon of the Desert by the surrealist director Luis Bunuel.  The title character is a combination ascetic monk and ‘fool for Christ’ who undertakes heroic self-imposed disciplines in his attempt to honor God and resist the temptations of the Devil while perched atop a pillar set up in the wilderness.  A fierce critic of religion, Bunuel never the less displays some uncertainty in his a-vanguard portrayal of the famous saint.  He seemingly admires the uncompromising asceticism of a holy man who devotes his life to God while surrounded by the wickedness of the world. 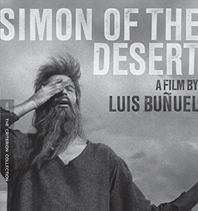 From his pillar Simon offers words of wisdom and wise counsel while working miracles and wrestling with Satin. In the film, Simon’s disciples often shrug off his advice and dismiss his miracles as they all too quickly revert to their old primitive selves.  A thief, for example, whose hands were cut off has them miraculously restored and he immediately strikes his son. Bunuel portrays his Christ-like Simon as a steadfast hero caught-up in the midst of confusion and uncertainty.  In that regard Simon is certainly a man for our times.

The questions raised by Bunuel made me look for more information about the real St. Simeon the Stylite.  The initial references I read led me to think that, like many other legendary figures, St. Simeon was the product of pious fiction.  I accepted that an ascetic monk named Simeon existed in fifth century Syria but that his fantastic story was an embellished tale akin to a fable.  Intrigued by the fanciful events in his story, I continued to look deeper into the account of this exceptional figure.

Turns out, St. Simeon the Stylite was the first of a long string of ‘pillar hermits’ who exist even into our own day.  Down thru the century’s practitioners of this bazaar form of ascetic discipline have acquired a reputation for holiness that has attracted and edified countless pious believers.  If I knew that someone had been sitting atop a column in Roslindale Square fasting and praying for thirty-six years, I’d surely visit and consider seriously what they might may have to say.

At the university library, I discovered that information about St. Simeon’s life came from very reliable contemporary sources who offered first-hand accounts of their encounters with the holy saint.  The historian and bishop Theodoret lived at the same time as Simeon and wrote of his life of holiness.   Most modern commentators agree in fact that the feats of ascetic virtue and endurance as well as the counsel attributed to St. Simeon are beyond dispute.

At sixteen years of age the shepherd boy from Sisen in northern Syria entered a local monastery.  From the beginning he undertook a discipline of fasting and prayer so rigorous that the monks considered him unsuited for their form of communal life.  Being forced to leave the monastery he shut himself in a hut and remained there for the next three years.  There he survived the entire Lenten Fast without food or drink, a feat he would repeat for the rest of his life.  Leaving his hut, he moved further into the wilderness and confined himself to the crag rocks of an isolated mountain top.  Here he developed his discipline of standing upright in constant prayer for so long as his limbs would sustain him.

Over time, his reputation as a holy ascetic grew and people began visiting Simeon in the wilderness asking for his prayers and seeking his advice.  The growing crowds distracted Simeon from his prayer discipline and he decided to leave his mountain top retreat.  He set up a stone pillar with a small platform on top, there he hoped to live out the rest of his days in silence, fasting and in prayer.  But it was not to be, as even more pilgrims sought him out.  He erected increasingly larger columns, the final one being fifty feet tall, but still pious pilgrims and curiosity seekers found their way to St. Simeon’s pillar.

Encounters with the holy ascetic left a deep impression on his visitors and soon clay and metal tokens and paintings bearing the image of Simeon perched atop his column began to circulate throughout the Near East, the Mediterranean and Europe which only attracted more visitors.

Seeing the pilgrims as messengers of God’s will, Simeon began to interact more directly with his visitors.  He had a ladder erected so they could climb and speak privately with him.  He regularly delivered sermons from atop his platform.  He often preached against profanity, exploitation and greed.  In contrast to his own extreme asceticism, he preached with great moderation and compassion free of judgment and fanaticism. He even wrote letters to his visitors and disciples, the text of some still survive including one he wrote to the Emperor Leo and St. Genevieve of Paris.  Among his most noted visitors were the Roman Emperor Theodosius and the Empress Eudocia.  The Patriarch of Antioch, Domninos II visited Simeon and celebrated Liturgy atop his pillar.

After 37 years of living above the ground, Simeon died peacefully, bent over in prayer.  He died on 2 September 459 and the Patriarch of Antioch, Martyrios buried the humble monk at his cathedral.  His sacred relics were venerated there until modern times.  We are blessed to have a relic of St. Simeon the Stylite here at St. George for veneration.

The site of his original pillar and the ruins of the adjoining cathedral erected around it are outside Aleppo, Syria and are designated as a UNESCO World Heritage Site.  Tragically, the complex was occupied by Islamist Forces in 2013 who used the site as a training camp for its fighters.  Opposition forces attacked the site in May of 2016 causing extensive damage.  A missile from a Russian jet struck the pillar of St. Simeon and virtually destroyed the surrounding area with only the base of the column remaining.  It is hoped that if peace is restored in Syria, the site of St. Simeon can be restored and pilgrims will once again visit the hallowed grounds of this beloved saint.

Through the prayers of St. Simeon the Stylite may we know compassion and mercy.