Antoun, originally from Zook near Beirut, arrived in America in 1888 and became a successful dry goods merchant with stores in Boston, Providence and Newport.  He owned rental property in these cities and actively resettled immigrants from his homeland.  His brother, Aziz lived at 22 Oxford Street with his wife and son.  Aziz Boulos managed a dry goods store in the South End.  Of the seventy nine residents of Oxford Street, fifty eight were ‘Syrian’ and seven of the families living there were Maloof’s.  Hundreds of other ‘Syrians’ lived on nearby Edenboro, Harrison, Kneeland, Hudson, Oliver, Albany, Harvard and Oak streets. Over half of whom were Orthodox Christians.

The hardwood floors were scrubbed and varnished; the walls and ceiling were painted snow white.  The far wall was adorned with a large Cross and Icons of Christ, the Theotokos and St. George.  The only furnishing was a kitchen table draped in white linen which served as the Holy Altar.  On the table were the Holy Gospel book, the sacred vessels and the Antimension cloth containing a relic of St. George which Fr. George had received from Bishop Tikon in New York.  Two gas lamps hung in the middle of the ceiling.  A fireplace under a Victorian mantle warmed the huddled faithful as they stood at Divine Liturgy during that first winter. 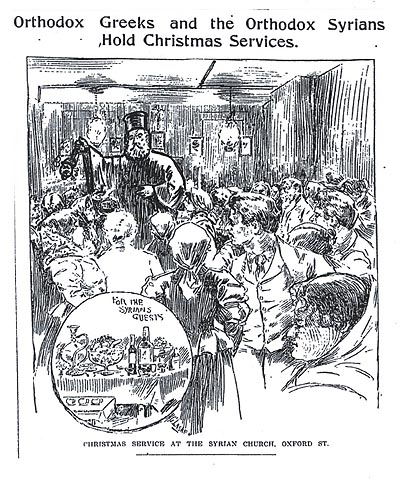 On Sunday morning, January 7th 1901 the parishioners of St. George Syrian Orthodox Church of Boston celebrated their first Christmas [according to the Julian calendar used by the Orthodox Church at that time].  The weather was threatening with brisk icy winds from the northwest.  The temperature was in the mid twenties and it was starting to snow.  For many, this was their first taste of icy New England winter and snow.  Just in time, Washburn’s on Washington Street had a sale on wool overcoats for $8 and fur hats for $3.50.

Julia Abraham and her nephew Fareed walked across the street that morning to attend Christmas services; she had much to be thankful for.  Thirty year old Julia had recently arrived from Douma in search of her sister’s son, Fareed.  Her sister and brother-in-law had died in a fire in ‘98’ and five year old Fareed Maloof had disappeared into the city’s nascent social services system.  He was barely a year old when his parents sailed out of Beirut harbor for England and Boston in 1893.  Julia found him living at the Episcopal Home for Destitute Children on East 4th Street in South Boston.  The now seven year old Fareed could speak, read and write English.   Issa and Julia Hadge were there along with his mother Mary and their two daughters Agnes and Mary.  Abraham and May Saba and their children Julia and John walked from their home down the street.  George Abdalah came up from Albany Street eager to assist Fr. George as a chanter.  Jonathan Maloof, a friend of Archimandrite Raphael Hawaweeny, came from Kneeland Street with his wife and three children, their teenage son Philip would serve as an altar boy.  Assad Ayoub came from around the corner on Edinboro Street where he was a lodger.  In all, over one hundred and fifty faithful crammed into the make shift chapel that first Christmas Day.

Mr. K.G. Laske, a reporter for the Boston Globe, was also there, anxious to report on the historic event. “Today Is Christmas” was the headline of his feature article.  He visited the Greeks at their chapel on Kneeland Street, named for the Feast of the Annunciation of the Theotokos, and then he walked over to visit the Syrians.  In the past the Syrians had worshiped with the Greeks at their chapel, “but”, he said, “this morning on Oxford St. they opened a little chapel of their own, where Christmas services were held according to the Syrian Liturgy.”  This was probably Mr. Laske’s first visit to an Orthodox Church service and, given that they were celebrated in Greek and Arabic, he proves to be a keen observer.  He reports that the celebration began shortly after 8 o’clock with prayers and hymns describing the events associated with the birth of Christ.  This was obviously the Orthros service for the Feast of the Nativity. He noted that, during this service, the faithful entering the small room took candles and lit them in front of the Icons which illuminated the entire room.  This service was followed by the Liturgy or as he referred to it “high mass”.  The services, he states were, “conducted in the Arabic tongue by Fr. Jerais Bodoo Maloof, and were a welcome sound to the Syrians who have long been ardently desiring religious services in their native language.”  He was obviously struck with the chanting and singing.  Laske remarks that the church employs no musical instruments and relies only on the human voice which he considers “the most beautiful of all instruments.”  He states that “the various refrains sung by the venerable priest in his gorgeous robes were answered in chants by the singers.”  He remarks that the solemnity of the service and the music must be like the “services of the ancients told of in biblical history”.  For him the “most impressive ceremony” was the distribution and reception of the Holy Eucharist.

Mr. Laske notes that Fr. George had been in Boston for only four weeks and that he arrived with the blessing of his Patriarch in response to a petition sent by the Syrian Orthodox community of Boston.  Fr. George, he reports, “was born in the village of Dooma in the shadow of Mt. Lebanon, and is delighted at having been called to this country, especially since, he says, nearly all the inhabitants of his native village have gradually emigrated to America.”   Laske made an endearing sketch of the event which ran prominently in the next day’s paper.  In it you can see Fr. George vested and wearing a kamilavka while censing the worshipers.   The faithful appear in their best dresses and suits, huddled together, attentive to the service.  The women have their hair tied back and covered with decorative scarves.  One man stands prominently in the forefront finely dressed with tie and three piece suit watching Fr. George.  A bearded gentleman in an overcoat strikes a pious pose as he gazes in the direction of his priest.  Laske remarks that the “fervor of the Syrians throughout the services showed how sincere and how grateful they are for their own house of worship”.

Following the Liturgy, the community assembled to exchange Christmas greetings and welcome each other and their guests.  A table was set out laden with pastry and fruit, wine and arak,   demitasse’s of robust Arabic coffee and the arghile.  The treats are depicted in an insert on his drawing and entitled “For the Syrian’s Guests”.  Mr. Laske was obviously impressed with the majesty of the Christmas services and the hospitality of the Syrians.  His illustrative story and quaint drawing remind us of the great joy expressed by our spiritual forbearers and the sincere hope they held for a prosperous future.  As their heirs we honor them with pride.  On Christmas I’ll be thinking of these devout men, women and children who, one hundred and twelve years ago, gathered around their new priest in their new church to glorify their Saviour on Christmas morning and proclaimed “Christ Is Born!”