A Priest for Boston 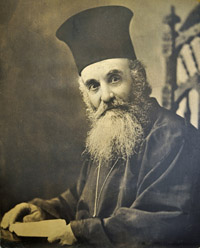 A number of the Boston immigrants were from the Zahly area as well as from Douma, where Abouna Jirjis was born, and from the region of Baalbek where he had once served.  This village priest from Mount Lebanon had acquired a reputation as ‘a loving, kind and gentle priest with a big heart’ and those who knew him believed he would be the perfect priest for Boston.

Among the petitioners were: George Abdalah, Thomas Nader Maloof and Bashara Abdalah of Douma; Assad Ayoub and Habeeb Bader of Zahle; George Shibli Maloof and John Abdalah along with Asa, Boulos and Assad Hadge all of Schiefa; Salim Ayoub of Damascus; Joseph Deraney and Nassar Homsy of Dariyeh and Antoon Boulos of Zouk.   On receiving the letter, Archbishop +Gerasimos discussed the request with Abouna Jirgis who agreed to make preparations to travel to America.

Abouna Jirjis was born Shibli Aba Daou Ma’alouf at Douma in the region of Mount Lebanon in 1846. He was the oldest son of Jirjus and Mary [nee Ma’alouf] Ma’alouf.  Jirjus Ma’alouf, the only son of Ayoub Daou Ma’alouf, was a wealthy businessman of the town.  Jirjus and Mary had three sons; Shibli [Abouna Jirjis], Sim’aan who died at Douma without children, and Tannous who with his two sons, Elias and Yoosef immigrated to America.  They also had at least one daughter.

According to the historian and genealogist, Eesa Iskandar Ma’loof, author of ‘Dawani Al Qutoof’ [1907], this family is of the Daou Ma’alouf line that settled in Douma in the 1500’s.  The area, rich in minerals, was inhabited from Roman times and several archaeological sites remain. The Ma’alouf’s rebuilt an abandoned village and named it Douma after their ancestral home Daamma Al’Ulia.  They became patrons of the local Greek Orthodox Church and monastery of St. John the Baptist.  Several members of the family were abbots of the monastery and the family provided clergy to the Church throughout several generations. The revered Icon of the Theotokos at the Kaneesat As Sayyideh Church is attributed to the Ma’alouf’s.  Branches of the family include Shalhoub, Ayoub, Bashir and Fayoud.  These families traded in silk, wool, olive oil, leather, grain and iron and the town became a thriving marketplace with nearly one thousand people and over 150 stores.

Shibli Ma’alouf married Shams Saad and they had two children, Tanios Jirjis [Thomas] born in 1884 and Thekla Nelli [Nelly] born in 1887.  Shibli was ordained a Greek Orthodox priest by Archbishop +Mathodios [Saliba - 1854 – 1888] and took the name of his father, Jirjis.  The Archbishop assigned Abouna Jirjis to serve the Church of St. George in the village of Jab’a.

Jab’a [the hill] is a small village of approximately 5 acres near Al Hadath in the Ba’albeck region.  The area has been inhabited since Roman times and the ruins of a 1st century Temple of Apollo and several Roman monuments can be found nearby.  A number of ancient cave tombs are located here as well as several olive oil presses and wells dating from the Byzantine era.  The Al-Miyah Cave is next to the village.  The population in the late 19th century was less than 75 people.

Jab’a was founded by Elias Haashem Ma’alouf and his family.  When Fr. George arrived there several of his cousins were still living in Jab’a including Nohseef Elias Ma’alouf and his sons Shibli and Shukrallah.  Later, Nohseef made a ‘vow’ for the safety of his son’s and returned to their ancestor’s home in Douma to be near the Monastery of St. John.

The Greek Orthodox Church of St. George in Jab’a was destroyed during the Lebanese Civil War of the late 20th century. Today only one wall is left standing. All church records of the Diocese of Zahle were burnt during that war.

History and heritage are all too often the collateral damage of conflicts.  Human loss and suffering are compounded by the destruction of monuments and the eradication of documents.  Historical places and records serve to link us inextricably to our origins and provide us with an identity and familiarity.  Every attempt should be made to reconstruct and represent the past in the wake of conflict and war.  Failure to do so only compounds human suffering and tragedy by making our ancestors victims of the very violence we ourselves perpetrate.

After serving at Jab’a for about one year, Abouna Jirjis was sent to serve at the historic Church of St. George at the village of Deir al’Ghazaal.  Deir al’Ghazaal [Monastery of the Gazelle] is an agrarian village built up around the 13th century monastery and church of St. George.  Built along the Ghazaal River, a small stream running to the Litani River, Deir al’Ghazaal is located near Zahle in the El Mghara Valley between the villages of Ra’ait and Qousaya.  Situated in a forested area nearly 3,400 feet above sea level, it covers approximately 2.5 square miles of small farms, fruit and olive orchards, a cluster of homes and shops.

Hand hewn rock caves dating to the Phoenicians are scattered throughout the valley.  A Roman stone quarry is located next to the village as are Roman tombs and sarcophagi.  Ruins of churches and homes from the Byzantine era are found nearby.

Abouna Jirjis and his family arrived at Deir al’Ghazaal in the late 1880’s.  At that time the village consisted of approximately 150 homes with a population of fewer than six hundred people. Nearly one third of the people were Greek Orthodox.  His children, Tanios and Thecla grew up there.  Tragically, his wife, Shams, died at Deir al’Ghazaal while giving birth to their third child, who also died.  Following the death of his wife and child, Abouna Jirjis remained in Deir al’Ghazaal until the fall of 1900. The church of St. George remains active to this day although all parish records were destroyed during the Lebanese Civil War.  Abouna Jirjis is still remembered in the region of Zahly as a ‘saintly priest with a kind and loving heart’.

His son, Tanios Jirjis Ma’alouf left Deir al’Ghazaal with several friends in 1899 and sailed for South America.   Archbishop +Garasimos [Yared] died in 1899 and Abouna Jirjis, having committed to journey to America, went to Damascus to receive a blessing and official release from Patriarch +Meletius II [Doumani - 1899-1906].   In October of 1900, Abouna Jirjis and his daughter Thekla traveled to Beirut to board a ship and begin their long voyage to America.  The first leg of their journey took them to Liverpool, England.  In Liverpool, on November 6th, they boarded the ss Lake Champlain en route for Quebec City.

They arrived in Quebec City on November 19th 1900 and were admitted to the United States at St. Albans, Vermont.  Abouna Jirjis had $20 with him and listed his brother-in-law Antoon Boulos of Providence Rhode Island as his closest relative in America.

Abouna Jirjis and Thekla took a train to New York City to meet with Archimandrite Raphael Hawaweeny the administrator of the ‘Syrian Orthodox Mission’ of the Russian Orthodox Church in America.  The primate of the Russian Orthodox Church, Bishop +Tikhon, accepted his letter from the Antiochian Patriarch and officially appointed Fr. Georges Aba Daou Maloof to serve as the priest in Boston.  Bishop +Tikon signed and presented his newest priest with an Antimins containing a relic of St. George and with necessary liturgical items.  The sacred Antimins is preserved at the Prothesis table at St. George Church to this day.

Fr. George D. Maloof arrived in Boston at the end of November and was eagerly welcomed by his fellow countrymen including his brother-in-law Antoon Boulos and the entire ‘Syrian’ Orthodox community.  His first home was at 6 Oxford Street in the South End where he established a chapel on the first floor and dedicated it to the patronage of St. George the Great Martyr.  This was ‘officially’ the second parish of the ‘Syrian’ Orthodox mission in the United States.  Fr. George was one of the first permanent ‘Syrian’ Orthodox priests in North America.