“Tell Them the Kingdom of God Has Come” 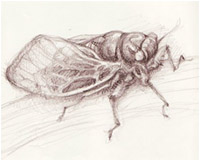 Cicadas show up every seventeen years, make a racket and quickly disappear.   The American election cycle sometimes reminds me of the cicada.  Every four years politicians come out and make a lot of high pitched noise about how much better off the country would be if only they were in charge. Curiously, once someone ‘wins’ things generally remain pretty much the same.  This year the ‘noise’ is all about the economy, jobs and health care, fair enough.  Everyone agrees that these are serious issues that directly affect us all.  On the economy and jobs this year’s presidential candidates have radically divergent views and it shouldn’t take a voter too long to see just where they are coming from.  Both however are ‘health care’ reformers who have addressed this incredibly complex and convoluted issue with some measure of success.  It should be interesting to see how their conversation on the issue plays out.  Health care is about everyone and everyone agrees it could stand some changes.

Jesus was probably the world’s first health care reformer.  In his day you went to a temple or some holy site, made an offering and got a healing.  Jesus and his friends decided to heal for free where ever they met the sick.  Healing was at the center of Jesus’ ministry.  The New Testament records over fifty cases of healing by Jesus and his followers.  The crippled, the blind, the paralyzed, the demon possessed and the lepers were cured.  Even the dead were resuscitated.  Jesus calls on us to do the same.  He told his followers to go into towns and “cure the sick who are there and tell them that the Kingdom of God has come to them” (Luke 10:9).  Religion, race, caste or payment is not a consideration; instead, mercy and healing is extended to everyone.  It doesn’t take a miracle to offer mercy and healing to anyone who needs it.

Jesus had a pretty basic economic theory; if you had some stuff you shared it with someone who didn’t.  In our society the quality of health care a

person receives is a function of the type of insurance that person has.  Figuring out how the insurance industry works may take a miracle, however, it is a mistake to simply equate health insurance with health care. They are not the same thing and should be addressed separately.  To "expand health care", should always mean finding ways to make health care available for everyone.

If we use the Gospel as an example then the only proper way to make sure that all people have access to medical care when they need it is for those of us who have stuff to recognize that we also have a financial responsibility to provide for the maintenance of a equitable health care system from which medical bills are paid. Running the numbers, in the U.S. there are nearly 50 million people without health insurance and another 25 million with too little, that’s according to the U.S. Census Bureau.  If comprehensive and affordable health insurance was available to these 75 million Americans the entire society would be the beneficiary as the risk of high payouts would be spread among all members and premiums could be kept down.

When Jesus and his friends healed people they also restored their human dignity, making them ‘whole’ and viable contributors to society.  We can assume that the paralytic at Siloam, once cured, didn’t lounge around the pool anymore but went off to get a job.  The fact that 75 million fellow citizens lack affordable access to health care should be seen as a great diminution of human dignity, and a tremendous drain on society.

Over the next several weeks we’ll hear a lot about this.  Then, like the cicadas, the noise will die down and the politicians will go underground before the turkeys come around.  But the sick will still be here.  From Jesus’ early disciples who cared for and cured the sick to today’s caregivers who heal in our own community, we are called to carry out Jesus’ version of a health care plan: to care for everyone.  In this debate, the least we can do is support health care for all.  Really, it is the only Christian thing to do.