There’s also the touching story of the Draney boys, George and Sammy, who went off to gather firewood for their dear mother, Liddi.  Realizing that collecting scraps of wood would save their mother from buying fuel for her kitchen stove, the boys would make the rounds of vacant lots with their home made wheelbarrow.  As it turned out, one of the lots on Albany Street was owned by Jack McLaughlin, a well known local contractor.  After confronting the boys and not being able to understand their reply, Jack had the beat cop, Officer O’Hanlon, arrest them for trespassing and theft. 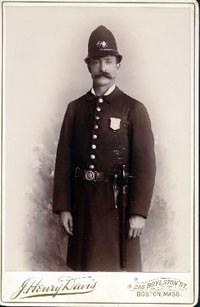 Fr. George went to the precinct station on La Grange to plead for the boy’s release, claiming they didn’t know any better he explained that the boy’s were not familiar with the concept of trespassing.  For their part, the boys, through an interpreter, told the desk sergeant how they were only trying to save their mother money by using the discarded scrap wood in her stove.  They told him how delicious her cooking was and that she was always in the kitchen preparing meals for the family and neighbors. The sergeant, who seems to have been a patient man, tried to explain the importance of private property to the boys.  Sammy, the youngest boy, asked if you could tell if a branch fell from a tree on the private lot or from a tree on the other side of the fence.  The sergeant explained that the land on the other side of the fence belonged to the railroad and that it too was private property.  Perplexed, the boys admitted their responsibility and waited for the sergeant’s decision.

Mr. McLaughlin, Fr. George and the desk sergeant talked things over.  Obviously moved by the brother’s story, McLaughlin refrained from pressing charges if the boys agreed to clean up his lot.  The boys spent the next few days clearing out McLaughlin’s property on Albany Street.  Satisfied with the job, McLaughlin told the boys to take all the scraps of wood and lumber home for their mother’s stove and then he made them responsible for watching over his property, promising to  give them a weekly allowance.  In gratitude, Mrs. Draney baked a tray of Syrian sweets for the old Irishman.  In appreciation for the sweets, McLaughlin hired the boy’s father as a laborer on his construction crew.  Thankful that their father had a good job, the boy’s agreed to watch over McLaughlin’s lot free of charge.  Impressed by the boy’s sense of integrity, McLaughlin promised to give the brothers jobs when they got a little older.

Then there is the tragic story of John Said, a well liked member of the city’s ‘Syrian Colony’ who was charged with carrying a loaded revolver and with theft.  The incident sent shock waves through the Arab community.  The story, as relayed at his trial, was described as, “one of the most interesting ones heard in court for a long time”.  It was also referred to as, “an interesting delineation of Syrian life in the Syrian colony in this city.”

It seems that John Said discovered he could buy ‘arak’, that flavorful translucent libation so popular with the people of the Arab Levant, in the rear of a local shop.  The owner of the shop, Anton Bejani, a fellow ‘Syrian’, distilled, bottled and sold his own spirits.  His lucrative enterprise was highly illegal, to say the least.  To make matters worse, he was selling the ‘arak’ on Sundays.

After several purchases, John and Bejani had words and a festering feud ensued.  One Sunday, determined to get the best of his nemesis, John informed on him to the local beat cop, Patrolman Healy.  John told Healy, “I bought two bottles over there and I can buy more”.  Healy replied, “O.K. go on and I’ll wait for you here”, gesturing to the store behind him.  As John crossed the street, his antagonist came running into the store where Patrolman Healy was to report John Said for making violent threats against him.  John, meanwhile, entered Bejini’s shop and scooped up a case of ‘arak’ from the back room.  Two women shoppers witnessed him take the goods and run out onto the street.  He sat the case of illegal hooch at an astonished Patrolman Healy’s feet saying, “There, now I’ve got him”.

The distiller quickly scooped up the case of coveted elixir and ran back to his shop with Patrolman Healy in hot pursuit.  Once inside Bejani discovered that $20 in bills was missing from his cash box.  Running past Healy, he quickly exited the shop in search of John Said.  Confronted in the next block the shop owner accused Said of robbery and insisted he be arrested on the spot.  When Patrolman Healy, blowing his whistle, caught up with them the two ‘Syrians’ were into a real tussle.  Bejani yelled out that Said had a gun.  By this time another policeman was on the scene and he grabbed Said sliding his hand into his pocket.  The officer pulled a loaded 38-caliber revolver from Johns’ hip pocket.  As Healy picked up and handed Said his coat from the sidewalk, he found a six inch folding knife in the inside pocket.  John Said was taken to the precinct station and locked up charged with carrying a concealed weapon and larceny.

At his trial, John Said admitted to buying ‘arak’ on Sunday and stealing the case of liquor from Bejani’s shop.  He denied taking the money and claimed the revolver didn’t belong to him and that he was just fixing it for a friend.  Fr. George attended part of the proceedings to show support for one of his flock.  Judge Holden spoke to Said of the laws against carrying weapons in public.  He noted that, “If people are allowed to go around with dangerous weapons the officers of the law take their lives in their hands whenever they make an arrest.”  The law, the Judge insisted, was especially intended, “For the protection of the guardians of the peace”.   Referencing what he saw as an ‘Ever-increasing habit of carrying dangerous weapons’, Judge Holden said it was time to “Lay down the law”.  John Said was found guilty on both charges and sentenced to one year in the house of correction.  At another hearing, Antoun Bejani was fined $300 for the illegal distillation and sale of alcohol plus an additional $150 for selling it on Sunday.

Immigration and assimilation into an alien society was an ongoing struggle for most of the ‘Syrians’ of the South End albeit one that they readily accepted.  Their occasional brushes with the law could be attributed to unfamiliarity with the language and customs of their new homeland.  Over all their offences were minor ones like not obtaining the required license or ignorance of a local ordinance.  Through it all, the members of Boston’s ‘Syrian Colony’ learnt, grew and prospered.