Those ‘huddled masses’ crammed in steerage class, courageously endured the long arduous voyage from the harbor at Beirut to France or England and then across the treacherous North Atlantic.  They certainly arrived ‘tired’. Many also arrived ‘poor’.

Their meager savings supplemented with loans from family and friends allowed them to purchase their $40 or $50 ticket to the New World.  Back home, the average immigrant earned less than 20c a day and coming up with the price of a ticket to America was an arduous task. 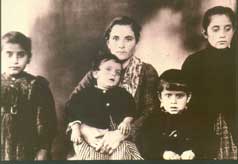 Besides the cash for the ticket, the immigrant needed money to get to Beirut, pay for provisions on board ship and to get settled upon arriving in the United States.  John Deraney came from Zahleh with his wife Sophie and three daughters; he had $25 when he arrived in Boston after spending almost $250 to get here.  They settled at 35 Edinboro Street.  Sixteen year old Ester Hamwey arrived in Boston from the Mount Lebanon with $10.  She lived with her uncle Tamar Homsy and his family on Oak Street.  Fr. George and his daughter Thekla arrived from Deir Al Ghazaal with only $20.  The little they had would go quickly once they rented an apartment, bought furniture, food and clothing.  As the community in the South End steadily grew the necessity of caring for the needy among them was quickly realized.

Within a year after his arrival, Fr. George convinced several members of the ‘Syrian Colony’ to organize a charitable society to assist the newcomers.   He would frequently visit the Syrian bakeries, restaurants and grocery stores accepting donations and delivering bundles of food to the needy.  Early in 1903 fifteen prominent members of the community met at the home of Hanna Maloof on Hudson Street to complete plans for a charitable organization to care for the poorer residents of the neighborhood.  On the previous Sunday, the week before Lent, Fr. George had read the Gospel of the Last Judgment. In their little chapel on Oxford Street, in front of his parishioners, he solemnly chanted the words of Christ; “I was hungry and you gave me food, I was thirsty and you gave me something to drink, I was a stranger and you welcomed me, I was naked and you gave me clothing, I was sick and you took care of me, I was in prison and you visited me.”   Known as a caring and sensitive priest, he surely exhorted his people to translate this Gospel and their prayers into action and conduct on behalf of the poor and thereby more perfectly serve Christ.

Besides Fr. George and Hanna Maloof, the organizers included Dr. Elias Sawabini, Ibrahim Maloof, Yousef Deraney, Salim Ayoub and Yousef Nakid.   Dr. Sawabini was from Jerusalem and he was one of the few professionals among the immigrants.  He readily offered medical services to those in need without charge.  He was chosen as president of the new ‘Syrian Charitable Society’. Salim Ayoub of Damascus was a successful brass goods manufacturer. He became treasurer of the organization.  Fr. George presided at his marriage to Anjoul Mousalli and on the same day celebrated the marriage of Salim’s sister Shamsi to Abraham Dahban, a tailor from Damascus.  They also assisted with the humanitarian effort.

The intention was to care for the sick, the children and the needy and to establish a community center in the vicinity of Beach and Hudson Streets where people could gather and the needs of the immigrants could be addressed. 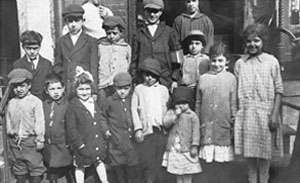 The original members went about drafting a list of prospective supporters.  Within a few days, sixty people submitted their names and agreed to contribute $1 each per month.  Most of the members of Fr. George’s growing parish assisted with the humanitarian effort as he actively encouraged them to join with their fellow countrymen in providing assistance to those in need.  In time, the organization offered legal assistance, housing and job referrals, classes in English and homemaking and a wide range of social services.

The ‘Syrian Charitable Society’ was the first organization of its kind in Boston and served the community for many years.  During those first critical years of increased immigration, Boston’s Syrian community succeeded in caring for its own by offering not only assistance but also providing hope and dignity to newcomers struggling to assimilate.  Thanks to their efforts, the promise of that majestic Lady Liberty and the initial emotion she evoked in the arriving immigrant would, in part, be fulfilled as they could now ‘breathe free’.  A survey of state and city social welfare agencies of the time shows that no Syrians were among their clients.  A spokesman for the YMCA noted that the Syrians were a “proud and generous people who were self-supporting and prefer to take care of their own dependents.”

For Fr. George, it was the Gospel that inspired him to serve his fellow countrymen in their need.  His ministry among the immigrants was his way of imitating the life of his Lord and Saviour.  By Easter 1903, he could see the fruit of his prayers as the community came together around a cadre of dedicated leaders to care for the welfare of the ‘least of the brethren.’