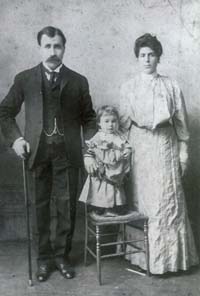 The following day, Charles gave me this handsome photo of his Grandfather with his wife Mary and their son George. The proud family had donned their finest apparel to pose for the rare picture.

Khalil, with his neatly trimmed mustache, is impeccably dressed in a finely tailored three piece suit, white shirt with high starched collar and silk tie.  A gold watch chain and decorated fob drapes the front of his vest.  His left hand guardingly grips a belt steadying his young son George.  With his right hand he lightly grasps his brass tipped walking stick while looking straight at the photographer and striking a confident gentlemanly pose.

Mary is vested in a finely stitched and embroidered floor length cotton linen dress with a high collar.  A braded sash is fastened around her waist.  A gold ladies watch and chain dangle from her left shoulder.  Her long dark hair is pulled up and a faint smile lightens her handsome visage.  Between them, perched on a chair, is their son George who appears to be about two years old. He stands in awe of the camera dressed in a boy’s dressing gown with ruffled collar typical of the day.

Khalil Jiries Laham arrived here from Daria, Syria in the winter of 1898.  He worked first as a fruit vendor before becoming a successful grocer.  Khalil and his family were among the founders of our parish. Recently, we baptized his great-great grandchildren, the twins Susan and Khalil Laham, children of Theresa and George.  They represent the fifth generation of their family here at St. George.  I can imagine this proud family sending a copy of their photograph to relatives back home in Syria.   In many respects, Khalil Laham and his family are typical of the hundreds of Syrian immigrants who arrived in Boston at the turn of the 20th century.  They were hard working, proud and generous people who founded our parish and established the legacy we enjoy today.

Since this series began over a year ago, people have offered me their stories of ancestors and relatives who made up the early community and I’ll share them from time to time.  Early on, Janet Teebagy told me about her Grandmother, Emma Boulos.  Emma was the daughter of Antoun Boulos, the brother-in-law of Fr. George Maloof.  She was born in Syria in 1883 and immigrated with her family in 1893.  First they lived in Providence, Rhode Island where her father owned a dry goods store and where Emma worked as a dressmaker.  As his business quickly grew, Antoun purchased rental property in Providence, Newport and Boston.  It was Antoun Boulos who donated the building for the first St. George Church on Oxford Street.  Later, as the parish grew, he donated a larger building on Edenboro Street.

Emma married Moses Khalil Shibley in Boston and they had four children, their oldest, Khalil, was Janet’s father.  Emma inherited her father’s knack for real estate and Janet says she remembers her Grandmother managing several properties.  The Boulos family are among the very first parishioners of St. George Church and Antoun is listed among the handful of immigrants petitioning the Orthodox Bishop of Zahle in 1899 to send Fr. George Maloof to minister to them.

Jamil Maloof, a distant relative of Fr. George Maloof,   gave me some photos of the ruins of St. George Church at Jabaa, Baalbek.  His family was originally from there but moved to nearby Hadath in the late nineteenth century following an outburst of sectarian strife in the region. 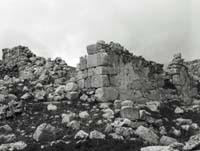 The village of Jabaa was made up almost entirely of members of the Maloof clan.  These Maloof’s migrated there from Douma in the previous century.  Fr. George Maloof’s first assignment as a priest was to St. George Church in Jabaa as the people there were his kin.  It was during his ministry there that the religious fighting broke out.  The village was depopulated and the church was destroyed.  The Maloof’s fled to the village of Hadath.  Jamil said that as a boy he heard the story about one of the desecrators of the church who stole the chalice and drank from it.  He was immediately struck dumb and never spoke a word again.  While visiting there this summer, Jamil took several photos of the church ruins and he said that the property now belonged to a local resident.  Jamil also brought us a relic from the site, a stone from the ancient church of St. George. 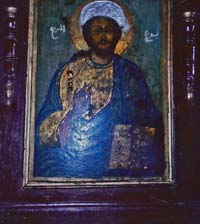 Jamil also visited the church at Deir el Ghazeil, Zahle.  After leaving Jabaa, Fr. George served the parish there for nearly ten years.  This church was also named in honor of St. George.  Originally part of a monastery, the church building dates from the fourteenth century and some ruins date to the Byzantine / Roman era.  Fr. George and his wife Kh. Shames [Saad] had two children born at Deir el Ghazeil, Tanois [Thomas] and Thekla [Nellie].  Kh. Shames died there in labor giving birth to their third child who also died.  They are buried at the church.  A stone inscription dedicated to the family can still be seen on the site.  The interior of the church, its iconostasis and icons remain as Fr. George would have known them.  It’s interesting that St. George was the patron of each of the three churches where Fr. George served.  In some respect we can look on these two churches as related to us here at St. George of Boston.

Next month I’ll share some reminisces from Amelia Maloof Haddad, Grandaughter of Fr. George.  She has some delightful memories.