Immigration to America from ‘Syria’ was averaging 4,500 per year by 1901 and the Boston ‘Syrian colony’ was second only to New York with a couple of thousand Syrians living mainly in South Boston, South Cove and what is today China Town.

The district was developed in the late 1800’s around an intermodal train/sea station with rail yards serving trains from the south and west.  The area included residential and commercial neighborhoods including the Leather District and several garment factories.  The port and rail terminus served as an important gateway for immigrants, particularly those newcomers from ‘Syria’ at the turn of the 20th century. They found ready jobs in the factories of Howes Bros. Leather or W.S. Cordingley & Sons Wool Co. and Jeremiah Williams & Co. Wool Goods.  Over ninety per cent of the immigrants were Christians and half identified themselves as ‘Greek Orthodox’.  Drawing them together as a viable parish would be an awesome challenge for the veteran priest and first pastor in Boston, Fr. George D. Maloof.

Himself a native of Douma, Fr. George quickly discovered that the vast majority of his new ‘parishioners’ were also from the neighboring villages of Mount Lebanon and the region of Zahleh.  A sizeable number also came from Damascus and the surrounding area.  The villages back home were quickly being depopulated of their youngest and most able inhabitants.  In a newspaper report from January 1901, Fr. George noted that “most of his home village of Douma had already migrated to America”.  Records also show that nearly all the residents of Jabha, where Fr. George had served as priest in the 1880’s, were now in America, many in Boston, having left in the wake of a Turkish massacre of Christians. By 1901, nearly one quarter of the residence of Zahleh had gone to America.  The earliest marriage and baptism records for the parish, dating to 1901, show that members also came from Dariyah, Hamat, Schliefa, Hayeth, Kefrhilda, Taboura and Shweir.

The majority of the newcomers were poor farmers and laborers with low skill levels and little formal schooling. Passenger lists and immigration records show that fewer than fifteen percent of the new arrivals identified themselves as merchants as did Joseph George and Massoud Barakat, and only a very few were identified as professionals.  No one could deny the opportunities that existed here for a determined immigrant.  Success stories abound as these newcomers went to work first in the leather and textile factories or as peddlers and then opened restaurants, grocery stores, bakeries, tailor shops and dry goods stores while purchasing property along Hudson, Tyler and Harvard Streets.  It is well substantiated that many of these immigrants, like Johan Maloof, Naseem Khouri and Assad Hadge, became relatively prosperous in a rather short period of time.

For many, this was the first time they had occasion to mingle with people from other villages and towns. Unfortunately, an unintended byproduct of immigration was that the newcomers sometimes brought with them traditional rivalries and prejudices born of regional loyalties, political, sectarian, and economic or class distinctions.  These tensions occasionally played out as the immigrant community struggled to carve out its place in a new society.  For his ministry to be successful, Fr. George would have to navigate this partisan landscape with great charity and humility.

The first wave of ‘Syrian’ immigrants from the 1880’s and early 90’s were mostly young and unmarried men like George Abdalah and Mitri Maloof who intended to make their fortune and then return home.  Once they established themselves, nearly all, including George and Mitri, remained in Boston and welcomed succeeding waves of their countrymen.  By Fr. George’s time, there were almost as many women among the immigrants as men and they were coming here to stay.  By then entire families were arriving.  Families like Joseph and Lidia Deraney with their five children along with Joseph’s five brothers and four sisters made Boston their new home.  The 1900 census shows this household of sixteen lived at one address on Harvard Street.  Thank God, Joseph was a grocer. 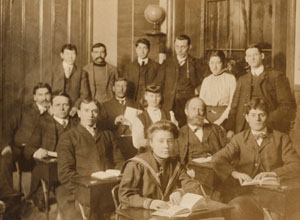 The decision to stay in America opened serious questions about preserving cultural values. How would children be raised and which customs and traditions would be passed on?  What would the role of Arabic be in the home or in the church?  Should the newcomers be Americanized?   Acquiring a certain proficiency in English was one of the immigrant’s first tasks.  A study of newly arrived ‘Syrian’ immigrants at the beginning of the 20th century shows that only about forty five per cent were literate in Arabic and virtually none knew English. Once here, the children were placed in public school where they quickly learned English. Older siblings and parents, however, struggled with the new language. Learning English quickly became a community priority and the city instituted evening classes for adults at five neighborhood schools including the Joshua Quincy Elementary School on Tyler Street.

Fr. George joined a class of Arabic speakers and for two years attended night school at Quincy Elementary.  His fellow students included a Catholic priest from the Syrian College in Beirut, a Syrian Protestant minister, a Catholic nun from Damascus and about twenty other ‘Syrians’ from the Boston neighborhoods. Sixteen year old Alice Bowab of Hudson Street was in the class.  An anecdote from the school’s history relates that; “During the worst snow storm of the winter the factory where she worked closed and she was suddenly out of work and with no income.  Some friends fitted her out with a pack of laces and notions to peddle on commission.  In her search for customers she wandered as far as Somerville.  The weather was bad and sales were few.  Yet, each evening she arrived at school cold, wet, tired and hungry, for, lacking the necessary nickel for the street car she had walked all the way from Somerville.”

Sophia Siad of Harvard Street also attended.  The school history notes that; “During a particularly bitter cold week she attended classes every evening and stayed late at night in order to conserve precious oil for the lamp that heated her attic bedroom.”

In time, Fr. George acquired a respectable knowledge of English.  Besides learning a new language, his experience at the Quincy School offered him a deeper insight into the aspirations and struggles of his fellow immigrants as he heard their stories and witnessed their successes.  His appreciation of the obstacles they faced and his sensitivity for their difficulties allowed him to minister more effectively as he actively sought out his co- religious among the new arrivals.  By the end of his first year as the priest of the ‘Syrian Orthodox Church’ in Boston, Fr. George had celebrated eleven marriages, baptized fourteen babies and buried nine people including several children.  Among the children was seven year old George Haddad of Harvard St.  While playing in the street in front of his home one August afternoon, young George was accidently struck by a wagon and died of injuries.  One can only imagine the impact such a tragic event had on the community as they consoled George’s parents, Solomon and Malachi.  The little chapel of St. George on Oxford Street saw over fifty people on a regular Sunday and over two hundred on Easter and other Holy Days.

On September 14, 1901 the President of the United States, William McKinley was assassinated by a crazed anarchist and a startled nation went into mourning.  Seven days later, Fr. George served the Divine Liturgy and offered a special Trisagion Service for the late President.  According to a newspaper report of the event, Fr. George offered a fitting eulogy for the fallen leader.  Fr. George exhorted his parishioners to remain faithful to the religious heritage of their ancestors and to be thankful for the many blessings and opportunities they enjoyed in their new country.