In August 1904, Fr. George and his cousin Dn. Ross Maloof arrived in Wichita, Kansas to visit the Orthodox immigrants living in the ‘Assyrian Colony’ located in the cities Sunflower district.  During his visit, Fr. George baptized three of Michael Ayoub’s children.  Michael and his wife Lena emigrated from ‘Syria’ to Mexico in 1896 before crossing the border at El Paso, Texas and making their way first to Iowa and then in 1902 to Wichita.  A merchant, Mike operated a store at 617 West Douglas Street.  The Ayoub family lived behind the store.  On Sunday, 28 August 1904, Mike converted his storefront into a chapel for the celebration of the Divine Liturgy and the baptism of his children Thomas, Mary and Madeline.

The newspaper account notes that this was the first Orthodox baptism in Wichita and the unknown reporter covering the historic event found it more than interesting.  He noted that this ceremony ‘differs from all others’.  Undoubtedly, a Protestant, he notes the characteristic differences between the Orthodox rite and the Methodist or Baptist ceremonies with which his readers would be familiar.  One can imagine this first time observer trying to relay his account of the elaborate Orthodox ceremony.  The fact that the entire celebration was in Arabic and Greek only adds to the ‘mystery’ of the event.  He succeeds in offering a detailed account of the baptism noting the frequent use of incense, the signing with the cross, the exorcism, the anointing with holy oil, the triple immersion and the chrismation with holy miron.  The reporter’s colorful account of the first baptism service in Wichita by an Orthodox priest is accented with quaint and expressive language and is well worth reprinting in its entirety. 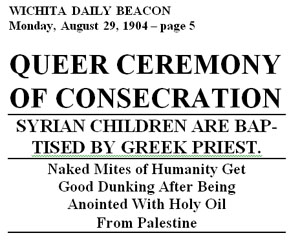 It was the first baptism ever performed by a Greek priest in Wichita.

The children who were baptized and consecrated were Thomas Ayoup, age 4 years; Madelina Ayoup, age 6 months; Mary Ayoup, age 2 years.  Their parents are Mr. and Mrs. Mike Ayoup, who live on West Douglas avenue in the Assyrian colony.

Father George Maloof came to Wichita from Boston last Thursday to perform the baptismal ceremony. A number of Americans were invited to witness it.  Following the baptism the father invited friends of the family to his home last night and the event was celebrated according to Syrian form.  The evening was one of pleasure making and wishing joys and blessings upon the consecrated children.

The Syrian form of baptism differs from all others.  The room in which the ceremony was performed was perfumed by the burning of incense.  The children were presented by godfathers and godmothers.  Passages of scripture were read from the Greek Bible and at times responses were made by those in attendance.

A few Americans who had been asked to attend curiously looked on as the priest drew the crucifix across the foreheads of the children. Each of the candidates was taken by the priest and holding the child before him he blew on its forehead and around it, as if vanquishing something unseen.  With a small brush the body of the child was then touched in spots with holy oil.  Next the clothing was removed from each and naked and squalling the tiny mites of humanity were ducked three times in a wash tub of the consecrated water.  This wasn’t done Methodist fashion either.  The most devoted hard shell Baptist could not have objected to this part of the ceremony, for the infants, in spite of vigorous protests were forced under water and the tiny bodies came up dripping and looking for all the world like kicking frogs.  Even the babe of six months was thus immersed and spectators, unused to such drastic observances, were stirred with pity for the little one.

The initial plunge came head first; then the feet went in, so that no part of the body remained dry.

Following this first part of the ceremony more reading was done from the Greek Bible and more incense burned.  This second part of the ceremony was for the consecration proper.  The crucifix was waved around and over the water into which the children were to be immersed.  Then the oil of consecration was brought.  This comes from the Holy Land.  The Assyrians will tell you that a priest from Constantinople and one from Jerusalem met years and years ago and engaged in prayer and fasting that the way of consecration might be revealed to them. After days of prayer they gave to the consecration ceremony the oil which is now used.

Taking a small brush the priest dipped it into the oil and beginning on the child’s forehead the body was brushed with oil.  Then followed the three final immersions.  Each child was hald under water a second at each immersion.  This ended the ceremony of baptism the children were returned to their parents and the congregation was dismissed with a Greek benediction.