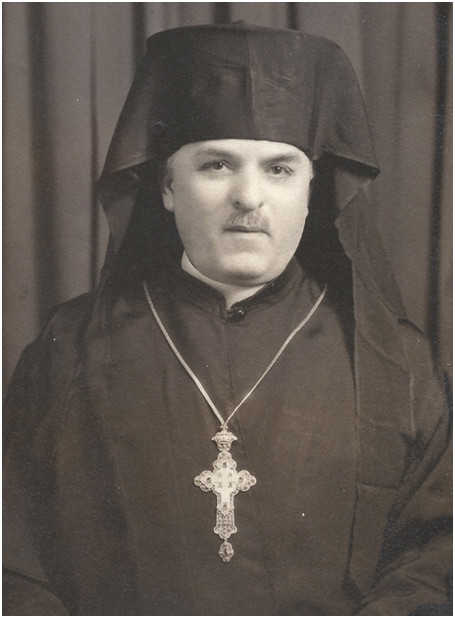 While researching the founding and earliest years of our parish history, I was also able to compile biographical sketches of some of our priests and will include them from time to time in this series.  Our founder, Fr. George Dow Maloof, featured separately in ‘part four’ of “Calling to Remembrance…” was the longest serving pastor of St. George having been with the community from 1900 until his death in 1920.  In this issue we feature Fr. Elias Hamaty who immigrated to Boston in 1900 and served Fr. George and St. George parish as a chanter and reader.  After his ordination Fr. Elias served here as pastor on three separate occasions.

Elias Simon Hamaty, the oldest child of Simon and Harshma [Figar] Hamaty, was born on 20 July 1880 at the village of Aafsdiq, Al-Koura, Syria [present day Lebanon].  His brother Khalil Simon, also known as Hababe, was born in 1882.  In 1884, their mother died leaving their father Simon to care for the two youngsters.  The following year, Simon Hamaty married Mariana [family name unknown] from the nearby village of Fiah. Of the second marriage, a son, Mousa Simon, was born in 1891, Michael Simon was born in 1894 and George Simon was born in 1896. The birth date of another son, Samaan is unknown.

The Hamaty brothers all studied at the Orthodox School of the nearby Balamand Monastery at the village of Al Qalhat. Their father, Simon worked as a groundskeeper and laborer at the monastery.  Mariana, known as ‘Im-Mousa’, served as the Abbot’s cook for many years.   Several years ago an Arabic manuscript entitled “Im-Mousa” was discovered at the Balamand.  The manuscript dates from about 1910 and relates a delightful story about Mariana and a conversation she had with the Abbot about her sons and their travels.  A translation of the story will be published in a future issue of “The Messenger”.

After graduating from the Monastery school, Elias Simon Hamaty stayed on for a couple of years to study as a seminarian.  In 1900 he immigrated to North America and settled in Boston where he found work in the local cafes and restaurants.  In 1902 Elias married Mary Nicholas [also known as Gusson] the daughter of Jacob Joseph Nicholas and Alexandra [Al Hawey] of Kfar Hilda in the district of Al-Koura, Syria [present day Lebanon].  She also had immigrated to Boston in 1900.  Elias and Mary were married by Fr. George Dow Maloof, the founding pastor of St. George Syrian Orthodox Church of Boston.  They lived at 12 Oxford Street, a few doors from St. George Church.  Elias worked as a waiter at the Syrian Café around the corner on Beach Street.  Elias and Mary had six known children; George Elias, Anna Libbie, Dalal, Sofia, Fred and Julia.  From the time of his arrival in Boston, Elias was very involved in the life of St. George parish and under the direction of Fr. George; he served as an acolyte, chanter and sexton.

In 1909 his brother Khalil immigrated to the United States and joined him in Boston. Khalil also found work at the Syrian Café.  On 29 November 1909, Fr. George Maloof officiated at the wedding of Khalil Hababe Hamaty and Adna Mattar.   Elias and Khalil soon decided to move west and start their own business. In 1910 the two brothers moved to Poplar Bluffs, Missouri.  They are recorded there in the 1910 Federal Census under the names Elias Simon and Charles Simon.  Elias owned and managed a restaurant and Charles was managing a fruit store. Elias and Mary had another daughter, Julia who was born in Poplar Bluffs in 1912.

Following the death of Fr. Nicholas, Elias began a correspondence with Bishop Germanos Shehadi who was living in New York at the time. Bishop Germanos was the bishop of Zahle and he had been in the United States raising funds for an agricultural school he hoped to build in his diocese.  He was well known and liked by many of the ‘Syrian’ Orthodox in North America including the community at St. George in Boston.  Following the death of Bishop Raphael Hawaweeny in 1915, Bishop Germanos sought to bring the ‘Syrian’ parishes into the jurisdiction of the Patriarchate of Antioch.  He consecrated the newly built St. George Church of Boston on Tyler Street in 1922.  In 1924, Bishop Victor Abo-Assaley was consecrated as the first Antiochian bishop in North America.

On Saturday, 6 April 1919, at St. George ‘Syrian’ Orthodox Church in Kearney, Nebraska Bishop Germanos ordained Elias Simon Hamaty as a deacon of the Orthodox Church.  The next day, Sunday, 7 April 1919 Deacon Elias was ordained a priest.  He was assigned as pastor for St. George and he served at Kearney from 1919 to 1922.  In 1922, Fr. Elias was asked to return to Boston and serve as pastor of St. George parish.  Following the death of the founding pastor, Fr. George D. Maloof in 1920, Fr. Abraham Zaine served briefly as the pastor at St. George in Boston before going to Pawtucket, Rhode Island.  Fr. Elias and his family arrived in Boston and settled at 137 Hudson Street in the heart of the ‘Syrian’ colony.  Tragically, Mary Hamaty died following a brief illness in November 1922.  Bishop Germanos presided at her funeral and she was buried at Mount Hope Cemetery in Mattapan.

Like his father before him, Fr. Elias was left to care for his children.  There were three still at home, the youngest, Julia, was only ten.  With support from his family, three of his brothers had moved to Boston over the years, and his parishioners, Fr. Elias was able to raise his children as a single parent.  His stepmother, Mariana [Mary] arrived from Aafsdic to live with her family in Boston.  His stepbrother, Mousa and his wife Nora [Melhalm], arrived in Boston at the time of Mary’s death.  Mousa and Nora Hamaty were the parents of Archdeacon Ely Hamaty who served St. George parish for over twenty years.

Bishop Germanos returned to his diocese in Zahle in 1933 and he died there the following year.  Bishop Victor Abo Assaley died in 1934 leaving a void in leadership of the Antiochian church in North America.  In 1936, the Holy Synod of Antioch elected a new Bishop for the ‘Syrian’ Orthodox in America, Metropolitan Anthony Bashir.  Fr. Elias was asked to return to St. George again in 1938 and remained for nearly five years.  During this time he organized a youth group for the parish and a religious education program.  His young nephew, Ely [Archdeacon Elias] served his uncle as an acolyte.  In 1943, Metropolitan Anthony asked Fr. Elias to move to Akron, Ohio and serve as pastor of St. George Syrian Orthodox Church there.

On 7 January 1945, Archimandrite Elias S. Hamaty suffering a heart attack while driving and died instantly.  His body was returned to Boston where on 13 January Metropolitan Anthony, assisted by nine priests, presided at his funeral.  Fr. Elias was buried next to his wife, Mary at Mount Hope Cemetery in Mattapan.  In 1970, his family had their bodies removed and reburied at Gethsemane Cemetery in West Roxbury.