‘for our Armed Forces everywhere..that He will aid them and grant them victory’

Fifteen year old Peter Corey arrived in Boston in 1905 from his ancestral home of Damascus.  His family sent him, his older brothers and cousins to America in order to avoid conscription into the Turkish Army.  The Ottoman Empire had a notorious reputation for brutalizing Christian conscripts and many military age men fled the Near East to avoid this cruelty.   In Boston, young Peter settled in the South End at 108 Tyler Street and worked as a peddler while attending the Quincy School at night to learn English.  Peter later took a job as a cutter in one of the neighborhood leather factories.  Peter and his extended family, the Aowdy’s were members of the St. George community.  In 1910 he married and his wife, Miriam gave birth to a son, Adel.  Tragically, in 1913 Miriam died during child birth along with their second child.  Peter’s relatives agreed to help raise his son. 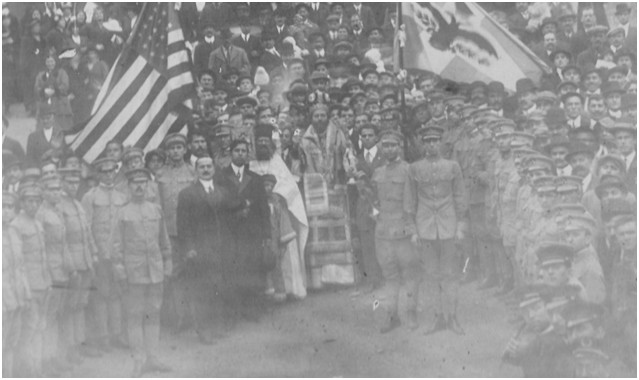 In 1917 the United States entered the Great War that had erupted in Europe in 1914 and soon engulfed most of the Eastern Hemisphere.  In May, Congress authorized the American Expeditionary Force to join our British and French Allies in fighting the Germans on the Western Front.  Congress also instituted a draft to enlist eligible young men to serve in the Armed Forces.  Peter Corey was drafted into the U.S. Army in March of 1918.  On 2 May, while at basic training he was naturalized as an American Citizen and deployed to the battlefields in France.

Pvt. Peter Corey was a rifleman in the 3rd Infantry Division.    The 3rd Division foiled enemy attempts in the period 1–4 June to secure a firm bridgehead across the River Marne at Château-Thierry.  They successfully defended the road to Paris, and on 6 June successfully counterattacked the Germans at the Battle of Belleau Wood.  In July they repelled another German offensive and succeeded in pushing the enemy back across the River Marne west of Château-Thierry.    In August, the 3rd Division joined seven other American Expeditionary Force divisions in spearheading the advance that would soon defeat the German Army.   About 270,000 Americans took part in the battle which demonstrated superior offensive capabilities and helped to inspire new confidence in the war-weary Allied armies.

Following the Armistice of 18 November 1918, Cpl. Peter Corey was transfered to the American Expeditionary Forces in Northern Russia and served at Archangel and Murmansk assisting the Russian White Army forces in their civil war against the Red Army.

Peter Corey was discharged from the Army in 1920 and returned to Boston before eventually settling in Maine where he worked in the ship yards of Portland.  In 1918, Peter had joined dozens of other young Syrian immigrants in Boston who were enlisted into the Army to serve their newfound country.  Among Peter’s ‘South End’ friends and members of our community were; 18 year old Joseph Josephs of Hudson Street, 19 year old Nassif Hallow of Harrison Ave.,  26 year old George Simon of Tyler Street was a Corporal in Co C, 51st Division,   27 year old Solomon Habib and 22 year old Abraham Hanna of Harrison Ave. also served in the 51st.  Drafted in 1917, twenty-one year old George L. Hamaty of 103 Hudson Street, son of Michel and Labibe from Afdike, served in the famed 42nd ‘Rainbow’ Division.  He returned home to Boston after 264 days of combat, took a job in a shoe factory and got married.  Their only child, Michael died in 2002 and bequeathed the church a substantial sum in memory of his parents.  Today the Michael Hamaty Scholarship Fund offers support for our college students.

There is a rare photograph [shown here]taken in the fall of 1919 showing Fr. George Maloof of St. George Church standing among the proud veterans of his community and Bishop Germanos of Zahle as they commemorate the first anniversary of the Armistice that ended the Great War.

Unfortunately,   the Great War or World War of 1914-1918 was not the ‘war to end all wars’ as it so eagerly boasted.  From 1941 to 1945, once again the community of St. George sent off scores of young men to fight another World War.  Our memorial board in the church narthex contains the names of 300 men and women who we know of that served our country in this conflict.  Among those listed are three brothers; Cpt. Abraham, PFC George and Sgt. John Abraham.  They were the sons of Iser and Katherine [Shaheen] Abraham, immigrants from Tripoli, Lebanon.  The brothers lived at 262 Shawmut Ave. with their brother Halim and sisters Sophie and Helen.  All three graduated from the Boston English High School and enlisted in the Army as the United States entered WW II.   Tragically, all three brothers died in service to their country.

Abraham, known as ‘Brownie’ was a Lieutenant in the 81st Infantry Division and served in the Caroline and Philippine Islands.  For his heroism in combat he was promoted to the rank of Captain and awarded several Bronze Stars.  Cpt. Abraham died in Germany as a member of the occupation forces.  His brother George was a rifleman in the 26th Infantry Division and participated in the capture of Metz from the Nazi Army in 1944.  In December he was among the American troops besieged by the Nazi’s at Bastogne.  He died at the ‘Battle of the Bulge’ on 19 December 1944 and was buried at the U.S. Military Cemetery in Hamm, Luxembourg.  Their brother, Sgt. John ‘Sheffie’ Abraham joined the Massachusetts National Guard and was called into active service with the 26th Division in 1941.  Sgt. Abraham died a few months after entering active service.

In March 1949, the bodies of Cpt. Abraham ‘Brownie’ Abraham and his brother PFC George Abraham were returned to Boston from Europe.  On St. Patrick’s Day a double funeral service was served at St. George Orthodox Church of Boston by Fr. Stephan Upson and several local clergy.  They were interred with military honors directed by the Nicholas Beram Veterans Association beside their brother John at Mt. Hope Cemetery.

In his obituary for the Abraham brothers, Fr. Upson states in part that ‘Every member of St. George Parish and all who knew these three good and brave men, must always carry in their hearts the grateful memory of these heroes who are held in perpetual remembrance at the Altar of St. George Church and we pray God as well for comfort of their dear ones in whose bereavement we all share.’

On 11 November we will pause to remember those men and women who served our country in the Armed Forces.  Let us remember them in our prayers and thank them for their selfless service.