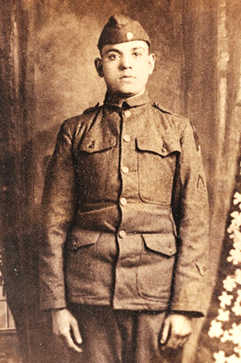 According to records from the office of the Provost Marshal General, no fewer than 13,965 ‘Syrian’ immigrants served in the United States Army during the First World War.  They represented nearly 10% of the entire immigrant population from the Near East in 1917.  Hundreds came from greater Boston.  Several young men from St. George Church served in the U. S. Army during the Great War.  One was Najeeb Kenen, from Bataboura, El-Khoura.

The oldest son of George and Zelpha [nee Jabour/Dagher], Najeeb was born on the 4th of July, 1897.  He arrived in Boston with his father in 1912.  Together, they worked as peddlers to save enough money to bring the rest of the family to America. Najeeb and his father lived at 425 Shawmut Ave. and were members of St. George parish.  When the United States entered the war, Najeeb enlisted in the Army and was assigned to the 68th Coastal Artillery in New York.

The 68th Artillery, C. A. C., was organized for the Coast Defenses of Long Island Sound on the first of June 1918. The officers had been designated by the War Department to select qualified men for the Regiment.  Only those men who expressed a sincere desire to serve at the front were accepted. From the beginning, the Regiment earned a reputation for its spirit, energy, and discipline, which brought them commendations from the War Department.

One of the new recruits was Pvt. Najeeb George Kenen known as ‘James’ from the Syrian Colony in Boston’s South End.  Najeeb was assigned to ‘Battery E’ at Fort H. G. Wright on the tip of Long Island.  The Regiment was equipped with wheel-mounted 6-inch seacoast guns known as the "Six Inch Terror."

By mid-June the men were settled in their new organizations and work began in preparation to enter the fighting in Europe.  For nearly two months, the Batteries worked hard at training, drills and target practice.  In early August, the USA Embarkation Office ordered the Regiment to sail for New London, Conn.  There they boarded a troop train headed for Boston.  At the Cunard Line docks, Najeeb and his fellow soldiers received sandwiches, coffee and cigarettes from the Red Cross and a complete physical inspection from the Medical Corps before boarding the British ship ‘Leicestershire’, bound for England.

The men were lead down into the hold. One soldier wrote: "We thought we were going there to check our baggage and imagine our surprise when we were told that it was to be our home, sleeping quarters, and mess hall combined. Hammocks were slung from the ceiling at night, rolled up and stored away in the daytime. The men made the best of their lot and settled down for the voyage they had so long looked forward to. Most of the men preferred to sleep on deck in clear weather. Newspaper accounts of submarine activities off the New England Coast only a few days before had no effect other than to arouse curiosity. A perfect trip had to include subs, storms, icebergs, whales and about everything else”. Once the ‘Leicestershire’ sailed out of Boston harbor, Najeeb and the others knew there was no return until it was "over, over there."

The ‘Leicestershire’ departed Boston in the company of six other ships, destroyers, sub-chasers and a dirigible. On the fifth day at sea, they joined with a convoy of six transports and a British cruiser, which had sailed out from Halifax.  After fifteen days in the North Atlantic, the ship was escorted up the River Thames and moored at the Tillsbury Docks. That night horns, whistles and sirens blew announcing an air-raid and the men ran up on deck to see what was happening.  The sky was lit up immediately with the brilliant beams of search-lights.  Nothing happened as the Germans had been turned back at the coast.  In the morning the Americans went by train to a camp at Romsey, England.   After four days they marched ten miles to Southampton where the British Red Cross gave them coffee and sandwiches before they boarded the steamer‘Narragansett’and sailed across the English Channel to France.

At 4 a.m. on August 30th 1918, after eleven hours standing on the deck of the ‘Narragansett’, Najeeb and the others arrived at Le Havre, France.  On the docks, they saw the enemy for the first time, German POW’s working as dock hands.  They also saw a long Red Cross Hospital train carrying wounded soldiers back from the front lines.  The sight of bandaged arms, hands and heads in the windows brought the horrors of war closer to the fresh troops. The rumor was that they were all heavy artillerymen.

On September 1st they moved toward the front and were assigned to tents and trenches.  They quickly learned to dodge the aerial bombs that the Germans fired at the camp with regularity.  One of the officers was seriously wounded during one such artillery attack.  The Regiment was split up and camped in different near-by towns, Najeeb and the men of his battery were billeted in old vacant stores, houses, barns and sheds. The first few days were spent in intensive training that occupied the men with calisthenics, the manual of arms, infantry drill, and hikes.

Within a week, their guns arrived from back home.  Now mounted on tractor trailers, their six-inch seacoast guns looked far more formidable than they did at the forts on Long Island. The men set about digging gun emplacements, maneuvering the cannons in and out of the pits, and gun drills. Gas attack drills, firing drills and hikes wearing gas masks were the daily routine.  Periodic artillery attacks from the German guns continued and some of the shells carried the dread mustard and chlorine gas.  In early November, Najeeb was among the casualties from these random attacks and was treated for exposure to poison gas.

Beginning September 16th a heavy artillery course was conducted by American and French officers. The course continued until November 4th. It made the men realize how ill prepared they really were for the type of artillery warfare being conducted at the front. Classes in Anti-aircraft, Machine Gun, Gas Warfare, Mechanics, Master Gunners, Orientation, Radio, Aerial Observation and Engineering were also part of the new training cycle.  Being fully trained for battle, the Regiment was ordered to move up to the front lines on December 4th.

Rumors of an ‘Armistice’ started circulating early in November and excitement ran high throughout the Regiment.  On the afternoon of November 11th official word was received that the ‘Armistice’ had actually been signed. The 12th of November was given over to a fitting celebration of the occasion. A parade was held in each Battalion, which was reviewed by the French Mayor and staff and the entire French population. The guns were transported to the coast to be parked and await shipment home.  By November 24, a new commotion arose in Camp, as the Embarkation Office issued orders to prepare to return home on the "First Available" transport.

Thanksgiving was observed a few days ahead of time by the Regiment, in order not to miss the occasion for a "big feed." The countryside was scoured for turkeys and many were found. The cooks put out a traditional Thanksgiving dinner with roast turkey and all the trimmings.  The entire Regiment feasted into the night in anticipation of their pending voyage home.

The Regiment’s new home was the Bordeaux Embarkation Camp and the 68th was at the head of the list each day but no orders came down for their departure.  Over the next month, a flu epidemic ravaged the countryside and five men of the Regiment died of complications.  The delay of the embarkation at Bordeaux became so exasperating that the Regiment’s Colonel complained to the authorities that “The men have no beds, no stoves, not enough blankets, are living from hand to mouth and getting sick because of it." The official reported to his General and returned saying: "Come down tomorrow." The Regiment moved to the Bassens docks on January 23, 1919.  Finally, on February 3, 1919, after five months in France, the 68th C.A.C. Regiment boarded the ‘ssMatsonia” bound for New York.

On the morning of the 15th they emerged from a heavy fog and spotted Cony Island.  Sailing up the Narrows, they passed the Statue of Liberty and anchored at the Fiftieth Street Pier.  The next morning they were ferried to their Headquarters at Fort Wadsworth on Long Island.  On February 21st, 1919 the Regiment was officially demobilized.  That evening the men held a dinner and final farewell, in the morning they drifted away gradually and by nightfall the 68th C.A.C. Regiment ceased to exist.

Although Najeeb Kenen and the men of ‘Battery B’ arrived in France too late to deploy to the front, they were under bombardment from German guns on several occasions. Proficiency reports indicate that, given their training, expertise and general excellence in the accomplishment of their duties, the Regiment would have achieved a commendable record in action.

Pvt. Najeeb George Kenen, returned to Boston to be reunited with his father, George.  By that time, George had enough money to return to Bataboura for his wife Zelpha and their other children.  Najeeb remained in Boston with his uncle Hanna at 111 Tyler Street.  George, Zelpha and their children arrived in Boston on May 30th, 1920.

As a result of his exposure to toxic gas, Najeeb suffered from lung infections and chronic nephritis.  In August, 1921 he was admitted for treatment to St. Elizabeth’s Hospital but little could be done and he died there on August 28th.  Fr. George Maloof offered the funeral service at St. George and Najeeb was buried at Mt. Hope Cemetery on August 30th.  In 1922 his body was reinterred in the newly dedicated section for deceased soldiers of the Great War.

This Armistice Day [now called Veterans’ Day] we remember Pvt. Najeeb George Kenen and the 300 other Veterans who served in the armed forces of our country.  May the memory of those who have departed from us Be Eternal.