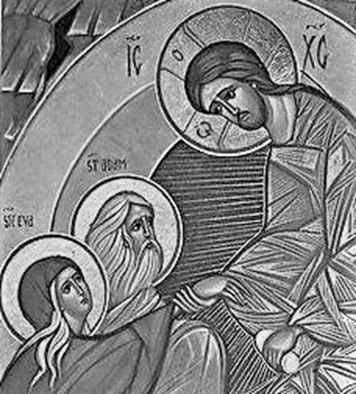 When St. Paul began preaching among the non-Jews he had to insist that there was life after death and that, though different from the life we know, it is an integrated life, involving a resurrected body, soul and spirit, a whole person.  Most pagans at that time didn’t believe in this type of afterlife.  It’s good to reaffirm Paul’s teaching in our own day and age when much is questioned about life after death and things spiritual in general.

"Tell me," Paul asked his converts "if Christ is preached as raised from the dead, how is it that some of you say there is no resurrection of the dead? .... If the dead are not raised, then Christ was not raised; and if Christ was not raised, your faith is worthless." Then Paul reminds us of the many appearances Jesus made after his death.  We hear these accounts each Sunday at the Matins Gospel.  It’s especially good to listen to them during the forty days between Pascha and the Ascension.  This year, as we celebrate Christ’s Resurrection let’s try and focus on our own eventual resurrection.  Our celebration of Pascha and the commemoration of Christ’s being raised from the dead can take on a new personal significance if we consider the promise that our departed loved ones and indeed all of us participate in the same kind of resurrection. "I am the resurrection and the life," Jesus declared to Martha in the story about the raising of Lazarus.  Her brother was returned to this life even though Jesus knew that Lazarus was already enjoying eternal life.  Lazarus returned in the flesh.

The resurrected Jesus is not a spirit floating around in the air but a recognizable person with a body.  Mary recognized Him when He spoke to her in the garden.  Thomas recognized Him when He put out His hands. A pattern emerges in the gospels as the Evangelists tell us how and to whom the resurrected Jesus appeared. He was present when his friends gathered in the ‘upper room’, when they were traveling along a country road, when they went fishing in the sea and when they  were  troubled and perplexed.  He passed through locked doors to meet with His friends. He walked and taught them as they journeyed into the countryside. He ate fish with his friends on the beach.  In the same way, He joins us when we celebrate who we are and he comes to us when we close ourselves off.

On the road to Emmaus, it took several hours -- until Jesus broke bread -- for his friends to recognize him. In our every day lives His identity is nearly always concealed until some gesture or phrase gives away His presence.

The stories about Jesus’ resurrection form the basis of Christian belief about the meaning of life and about life after this life. Christ's resurrection is the model for our own. Paul tells us, "If the Spirit of him who raised Jesus from the dead dwells in you, he who raised Christ Jesus from the dead will give life to your mortal bodies also through his Spirit who dwells in you." And he also says, "He will give a new form to this lowly body of ours and remake it according to the pattern of his glorified body."

Paul is talking about something clearly beyond human experience or imagination here.  Death in Christian thought is a transition into a new life with new possibilities that somehow involves the whole humanness of the person who dies.  For Christians, our earthly and eternal life is regarded as our one whole existence. Because this existence is a gift from God, our celebration of Christ’s Resurrection calls us to serious reflection on the mystery of our own life without end.  As we greet each other with the traditional greeting, let us remember that the same truth awaits us and then let us live the remainder of this life in its expectation. ‘Christ Is Risen’