MAY THEIR MEMORY BE ETERNAL

Over the past several years I have enjoyed writing the ‘Calling to Remembrance’ articles about the origins of our parish and presenting them in the ‘Messenger’.  Researching early church records, newspaper accounts, census records, photographs, documents and family histories has revealed a fascinating story of courage and dedication told by the early Syrian immigrants who settled the South End and who created St. George Church.  Among the many heroes of that age, our founding pastor, Fr. George Maloof stands out as a perfect example of the steadfast devotion and selfless sacrifice that characterize the immigrant community of his day.

Fr. George [Shibli] Dow Maloof founded and served St. George Church from 1900 until his death in 1920.  Born at Douma [Lebanon] about 1846, he was the oldest son of Jirjus and Mary Maloof.  Shibli married Shames Sarb.  Shortly after their marriage, Shibli was ordained a priest taking the name of his father, Jirjus [George].  Fr. George and Shames had several children including Tannous Jirjus and Thekla.

Fr. George first served at St. George church at Jab’a, Ba’albeck and later at St. George Church at Deir Al Ghazaal, Zahle.  Shames Maloof died there giving birth to her third child and the new born child also died.  In 1900, in response to a petition sent to his bishop, +Gerasimos [Yaared] of Zahle, Fr. George was asked to immigrate to America to serve the Orthodox community in Boston.

Fr. George and his daughter Thekla arrived in Boston in November 1900. His son, Tannous [Thomas] would join them the next year.  His first home was at 6 Oxford Street where he established a chapel on the first floor and dedicated it to the patronage of St. George the Great Martyr.  Later he moved the church to larger quarters at 32 Hudson Street.  The accompanying photo was taken there in about 1915 and shows Bishop Germanous [of Zahle] with Fr. George, his son Thomas and several of our founding parishioners.

Fr. George brought with him several precious prayer amulats that he wore in small leather pouches around his neck.  A pious custom at the time, these prayer scrolls were personally written, often by monks, as a blessing for good health and protection from evil.  In 2014, I delivered the amulets to the Library at the Balamand University in Lebanon for analysis and conservation.  Last year, the experts there completed their work and a scholarly interpretation and commentary of the Maloof Manuscript was prepared.

On Saturday evening, 4 November, Fr. Hareth Ibrahim - Director of the "St Joseph of Damascus Manuscript Conservation Center" at the Balamand will be here to officially return the manuscript and tell us about its history and significance.  Please join us for this unique opportunity to honor our beloved founder, Fr. George and learn about this precious document which is part of our parish history.

Because our parish was officially founded in November 1900, we would like to designate this day as ‘FOUNDERS DAY’ and host a banquet in honor of Fr. George and the early founders of the parish in conjunction with the presentation of the Maloof Manuscript. We also plan to pay tribute to the most senior members of our parish, some of whom count their parents and grandparents among our founders.  Please see the separate flyer announcing this special event and plan to be with us. 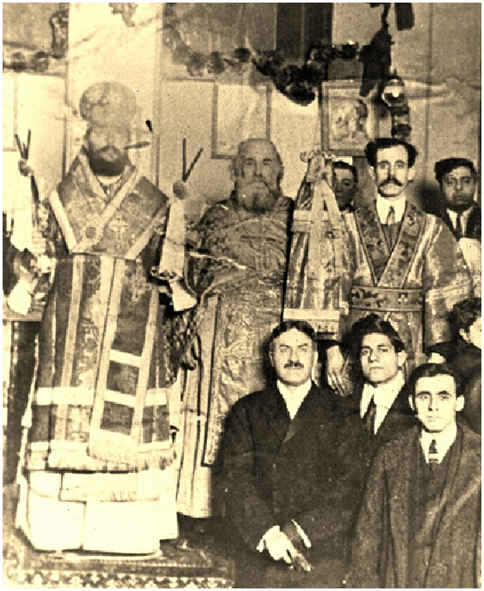 AS PART OF OUR “FOUNDERS DAY” PRESENTATION WE WOULD LIKE TO FEATURE ORIGINAL PHOTOGRAPHS OF OUR EARLY  FOUNDERS – IF YOU HAVE PHOTOGRAPHS FROM THE EARLY 1900’S PLEASE LET FR TIMOTHY KNOW AND WE WILL SCAN THEM FOR DISPLAY AND FOR VIDEO. 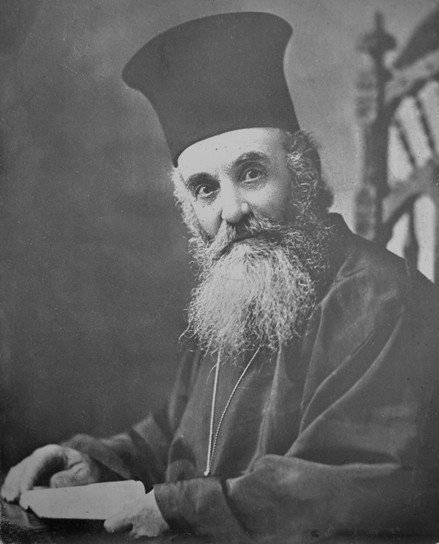 FEATURING A Special Presentation on

On the Maloof Manuscript [see separate add] by 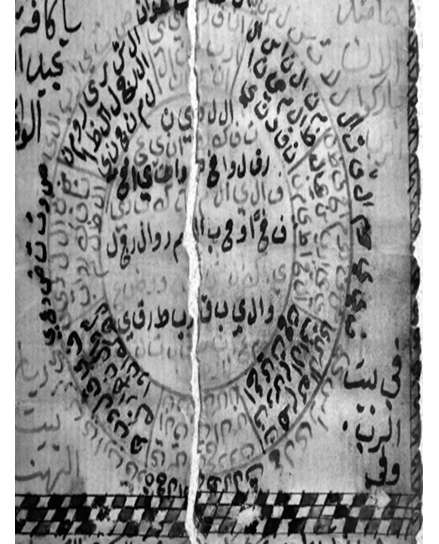 At the Balamand University in Lebanon 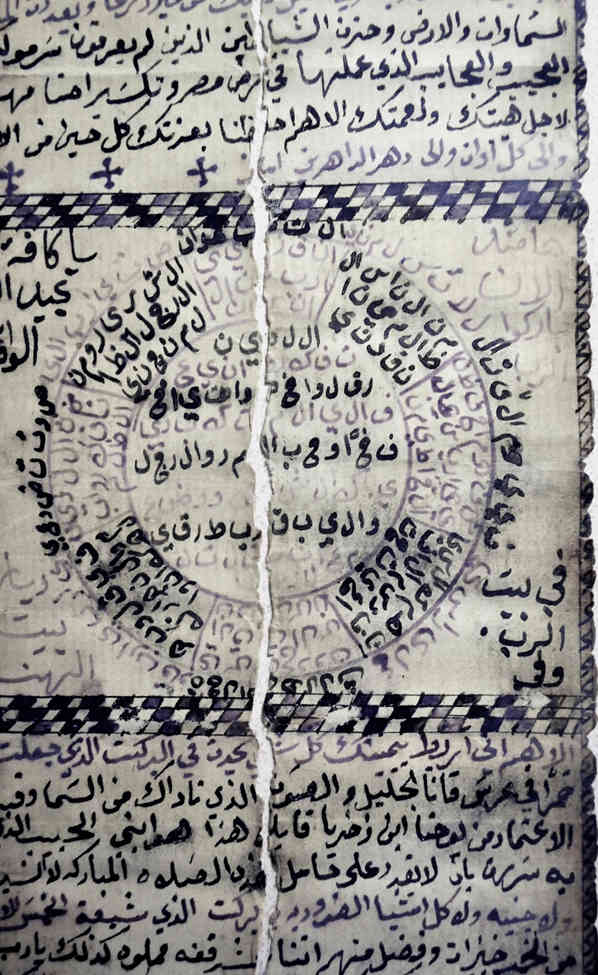 When he arrived in Boston in the fall of 1900, Fr. George Maloof, the saintly founder of St. George Parish, brought with him several precious prayer amulats.  Encased in small leather pouches, these amulats were worn around his neck quite possably from early childhood.  A pious custom at the time, these prayer scrolls were personally written, often by monks,  as a blessing for good health and protection from evil.  The amulets were commonly passed down within the family.  We are fortunate to have preserved       Fr. George’s prayer amulet here at St. George.

In 2014, the manuscript was delivered to the Library at the Balamand University in Lebanon for analysis and conservation.  Last year, the experts there completed their work and a scholarly interpretation and commentary of the Maloof Manuscript was prepared.

On Saturday evening, 4 November, Fr. Hareth Ibrahim - Director of the "St Joseph of Damascus Manuscript Conservation Center" at the Balamand and Ms. Evleen Jabbour Aude - Deputy Director, will be here to present their findings and officially return the manuscript to us.  Please join us for this unique opportunity to honor our beloved founder, Fr. George and learn about this precious document which is part of our parish history.

See the related flyer and poster for complete details.

CRIMES AGAINST CULTURE and HERITAGE

Fr. Hareth Ibrahim - Director of the "St Joseph of Damascus Manuscript Conservation Center" at the Balamand University is in a desperate race against time.  Since the rise of ISIS in Iraq and the onset of the civil war in Syria his institute has been in the forefront of a frantic effort to rescue precious manuscripts, books and libraries threatened with obliteration.

ISIS controls large stretches of Syria and Iraq. There's little to stop them from plundering and destroying historic religious sites under their control in the region known as the ‘cradle of civilization’.  They claim that the destruction of these sites, including Churches, Monasteries and libraries is religiously motivated.  They have targeted well-known ancient sites, religious centers, shrines and cemeteries, citing idol worship to justify their pillaging.

In the Syrian city of Maaloula, for example, the monastery of St. Thecla was almost completely destroyed and looted by ISIS and Al-Nusra Front. They took everything valuable from the Church and chapels, including ancient icons, historical manuscripts and books, altar furnishings and even tombstones. The Islamic militants destroyed everything they could not take with them before finally burning the monastery and orphanage.

Mar Benham Monastery, established in the 4th century, survived the ravages of the Mongol hordes in the 1200’s but fell to ISIS. The extremists used explosives to destroy the saint’s tomb and its elaborate carvings and decorations.  An extensive collection of historic Christian manuscripts was destroyed.

Mar Elian Monastery was occupied when ISIS militants captured the Syrian town of al-Qaryatain. Dedicated to a 4th-century Syrian saint, it was an important pilgrimage site and sheltered hundreds of Syrian Christians. Bulldozers were used to topple its walls, and ISIS posted pictures of the destruction on Twitter along with evidence of widespread desecration of Christian Icons, crosses and books.

In Mosul, the museum and university library was looted as soon as ISIS occupied the city. Centuries-old manuscripts were burnt, and thousands of books destroyed.  UNESCO head, Irina Bokova called the destruction of libraries by ISIS “A turning point in the appalling strategy of cultural cleansing underway in Iraq".

A professor from Mosul University added that ISIS wants to “change the face of civilization… by erasing its iconic buildings and history.” This does not appear to be an exaggeration; given ISIS’ blatant desire to destroy history and literature, they seem only intent on continuing this effort throughout the region. Forty-Five Christian Institutions in Mosul have been destroyed by ISIS.

Dura-Europos, an ancient Greek settlement on the Euphrates near Syria's border with Iraq housed the world's oldest known Christian church and a beautifully decorated synagogue. Satellite imagery shows a cratered landscape inside the city's mud-brick walls.

The mission of the "St Joseph of Damascus Manuscript Conservation Center" at the Balamand is to gather and preserve this cultural heritage.  Fr. Hareth will be with us on 4 November to tell us about this heroic effort to preserve history and defend our Christian culture in the land of its birth.  Please be with us as we offer our support for this monumental effort.