Remembering our Past Priests

While researching one of our early Pastors, Fr. Basilios Mahfouz, I met his son via phone.  George Mahfouz is ninety-four years old and lives in Ohio.  He is in good health, alert and sharp. Every Wednesday morning he meets his Syrian ‘cronies’ for coffee at the local donut shop and they swap stories about the old days.  We had several delightful conversations and he shared stories about his father and grandfather, who served here as a priests.  I hope you enjoy this brief bio of these two wonderful men, Father and Son who served as priests in the early years of our history.  His father was the last of a long line of twenty one priests in succession of the Mahfouz family of Damascus.

Fr. George Mahfouz was born in Damascus, Syria in 1854. He married Susanne Homsey in about 1880 and he was ordained in Damascus by Patriarch Hierotheos shortly thereafter.  Fr. George served as pastor at St. Nicholas Greek Orthodox Church in Rashaya, west of Damascus, for over twenty years.  His brother was also a priest; Fr. Nicholas Mahfouz served in Damascus.   In November 1902, Fr. George and his family immigrated to Montreal, Quebec.

He arrived with a letter of release from Patriarch Meletius II [Doumani].  Bishop Tikon assigned him to serve the community at Montreal replacing Archimandrite Meletios Karoum who returned to Syria.  The majority of the Montreal community came from Rashaya and knew Fr. George as their former pastor. He oversaw the continued growth of the community and converted his home into a chapel to provide regular liturgical services.  In 1904, he returned to Syria and remained there for one year.  Two of his older sons, George and Basilios remained in Montreal where they operated a fruit market.

In 1905 Fr. George and his family returned to Montreal.  In need of a permanent church, Fr. George led the community in acquiring an abandoned industrial building on Vitre Street East in Old Montreal as a suitable place of worship.  The property was renovated into a proper Orthodox church and in 1905 it was dedicated as St. Nicholas Syrian Orthodox Church.  In 1908, Fr. George and his family returned again to Syria.

One year later, Fr. George Mahfouz, his wife, Susanna, and four younger children immigrated to the United States.  They sailed first from Beirut, Syria to Le Havre, France, and arrived in New York aboard the steamer ‘ss. Chicago’ on 27 September 1909 destined for Boston.  Fr. George was sponsored by his friend from Damascus, Farris Diban who lived at 22 Hudson Street, Boston.  Farris was an active member of St. George Syrian Orthodox Church of Boston and his family is still with us.

Once again, Fr. George presented a letter of release, this time from Patriarch Gregory IV [Haddad].  In October 1909, Bishop Raphael [Hawaweeny] received Fr. Gregory Mahfouz and assigned him to assist Fr. George Maloof at St. George Syrian Orthodox Church in Boston.  Established in 1900, the Boston community was growing rapidly and Fr. George Maloof needed assistance in ministering to the new arrivals. Regional loyalties were dividing immigrants from the big cities and the villages, which threatened the stability of the community.  Bishop Raphael and Fr. Maloof believed the best solution to the dissension in the Boston community was the establishment of a second Syrian Orthodox parish.

Fr. George Mahfouz assisted at St. George for two years and was instrumental in establishing the Society of St. John of Damascus in order to satisfy the needs of the Damascene contingent of the Syrian Orthodox community.  By 1911 this group was able to purchase a house on Hudson Street and renovate it to serve as a church.  Fr. Mahfouz served as the first pastor of the newly formed St. John of Damascus Church until 1913.

In 1913, Bishop Raphael assigned Fr. George to Detroit, Michigan, to assist the growing Orthodox community there.  He celebrated the first Divine Liturgy for the community and was the first priest to serve the newly formed St. George Syrian Orthodox Church of Detroit. This is the last reference for Fr. George Mahfouz.  It is believed that he died prior to 1917 but to date no record has been found.  His son, Basilios, was ordained a priest in 1917, and he too served here at St. George.

Basilios George Mahfouz, the son of the priest Fr. George Mahfouz and Susan Homsey, was born in Damascus, Syria in 1889. His uncle, Fr. Nicholas Mahfouz, was a priest in Damascus. Basilios immigrated to Montreal, Quebec in November 1902 along with his parents and siblings. His father, Fr. George Mahfouz, was assigned to serve the church of St. Nicholas in Montreal.  In 1904 the family returned to Syria for one year, returning to Canada in 1905.  In 1908 the family returned again to Syria and remained one year before finally immigrating to the United States in 1909.

Basilios remained in Quebec and worked as a fruit merchant with his older brother George.  He also worked as a bookkeeper.  In 1917, he married Takla Neimy in Grand Rapids, Michigan. The daughter of Simon Neimy and Agia Howard, Takla was born in Saginaw, Michigan on 14 June 1901.  They were married by Fr. Philip A. Assaley at St. Nicholas Syrian Orthodox Church on 30 September. 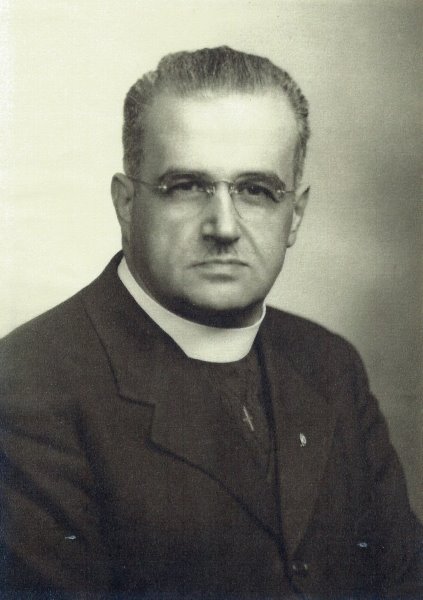 Basilios George Mahfouz was ordained a priest by Archbishop Aftimios Ofiesh on Sunday, 18 November 1917, becoming the twenty first priest in direct succession of the Mahfouz family of Damascus. His priestly ancestry extends to the fifteenth century.  The ordination took place at Holy Trinity Greek [Syrian] Orthodox Church in Holyoke, Massachusetts during the consecration of the church.  The Archbishop appointed Fr. Moses Abihider as the first pastor of the new church. Arch Deacon Emmanuel Abo-Hatab accompanied the Archbishop.  Both clerics sponsored the newly ordained Fr. Basilios.

Fr. Basilios is listed among the clergy loyal to Archbishop Aftimios Ofiesh throughout the Russy-Antacky dispute of the late teens and twenties.  Following his ordination he was assigned as pastor of St. George Syrian Orthodox Church of Lawrence, Massachusetts.  In April, 1920 he went to serve as the first pastor of St. Ellian Syrian Orthodox Church in Brownsville, Pennsylvania.  His son, George was born in Brownsville.  His mother, Khourah Takla, was living with her son and family.  She is recorded as a widow indicating that her husband, Fr. George, died prior to 1920, it is not known when or where. Fr. Basilios relocated to Boston in the mid 1920’s and was elevated to the rank of Archpriest by Archbishop Aftimios in April 1928 at St. John of Damascus Church in Boston where he was serving as pastor at the time.  The Archbishop assigned Fr. Basilios to head the mission outreach of the church in North America which required him to make several mission trips across the country.

Fr. Basilios arrived in Terre Haute in 1956 from Beckley, West Virginia.  Fr. Basilios and his wife Takla resided at 2423 Spruce Street. After one year as pastor at St. George, he became seriously ill and retired in 1957. In January 1958 he was admitted to St. Anthony’s Hospital and died there at 7:30 pm on 31 January.  His funeral was served at St. George on 4 February and Fr. Basilios is buried at Crown Hill Cemetery in Indianapolis, Indiana.

Besides his wife Kh. Takla, survivors at the time of his death included their son, George Mahfouz and his wife Lorraine of Dayton, Ohio; a brother John Mahfouz of Montreal, Quebec and a sister, Mrs. Fotine Zakaib of Sherbrooke, Quebec.  Kh. Takla Mahfouz died in Los Angeles, California on 2 January 1981.   Their son George still lives in Ohio and shared delightful remembrances with me about his Father and Grandfather.