While researching the founding and earliest years of our parish history, I was also able to compile biographical sketches of some of our priests and will include them from time to time in this series.  Our founder, Fr. George Dow Maloof, featured separately in ‘part four’ of “Calling to Remembrance…”, was the longest serving pastor of St. George having been with the community from 1900 until his death in 1920.  His one time assistant, Fr. Abraham Zaine, succeeded Fr. George as the second pastor of our community. 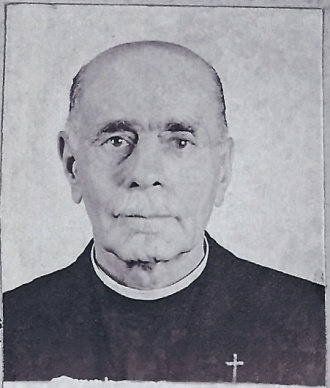 Abraham Shaheen Zaine, the son of Shaheen Zaine and Shateela Della was born in Damascus, Syria on 15 September 1878.  He married Najla Saad Thome the daughter of Melhiem Saad Thome and Sada Shahady of Damascus in about 1901.

In 1905, Abraham immigrated to the United States, leaving his wife and two daughters in the care of her parents, while he sought greater opportunities to provide for his family.  He arrived in New York on 12 July from Naples, Italy aboard the ‘ss Rapiteno’.  He settled in Boston where he found employment as a cutter in one of the local shoe factories.  Abraham resided at 84 Kneeland Street in the heart of the city’s ‘Syrian Colony’.  Abraham became an active member of St. George Syrian Orthodox Church on nearby Oxford Street and assisted the pastor, Fr. George Maloof as a reader and chanter.  He frequently accompanied Fr. George on pastoral visits to the growing ‘Syrian’ communities in Massachusetts, Rhode Island, Maine and upstate New York.

At the factory, Abraham quickly became a shoe maker and later a book keeper.  By 1907; he had saved enough money to send for his family.  On 16 November, twenty year old Najla Zaine and her two young children, Julie and Linda arrived in New York from Le Harve, France aboard the “ss La Lorraine”.   Settling first at the Kneeland Street address, they soon moved to larger accommodations at 36 Hudson Street.  Five more children, Charles, Rashalla, Mary, Alice and Elaine were born over the next ten years.  Abraham petitioned for American citizenship on 26 June 1912 while living at 39 Albany Street and employed at the shoe factory.

Abraham Zaine was ordained to the priesthood in Boston in April 1916, presumably by Metropolitan Germanos (Shehadi) of Zahle as he was the only ‘Syrian’ Orthodox bishop in the country at that time. In 1917, Archimandrite Aftimios Ofeish was consecrated to succeed Bishop Raphael Hawaweeny who had died in 1915.  Following the consecration of Bishop Aftimios, the ‘Syrian’ Orthodox community became embroiled in a dispute between pro Russian and pro Antiochian factions.  The Russian group sided with Bishop Aftimios and the Antiochian contingent allied themselves with Metropolitan Germanos. Known as the Russy/Antacky conflict, the resulting divisions lasted well over a decade.

According to a list compiled in 1918, Fr. Abraham is among the clergy in the jurisdiction of Bishop Afrimios.  Later, he appears on a 1924 list of clergy loyal to Metropolitan Germanos of Zahle.  Immediately following his ordination in 1916, Fr. Abraham became the first pastor of St. Mary Syrian Orthodox Church in Pawtucket, Rhode Island.

St. Mary was founded in 1910 by immigrants from Damascus and several Greek and Syrian priests made periodic visits to the community to serve Liturgy and administer the sacraments.  Foremost among the visiting clergy was Fr. George Maloof of Boston who was often accompanied by his chanter, Abraham Zaine.   Under Fr. Abraham’s leadership, the community purchased property on High Street and began construction of their church.  By the end of 1917, the ground floor was constructed and the cornerstone was laid.

Unfortunately, the parish was soon caught up in the Russy/Antacky conflict and the community was divided between pro Russian and pro Antiochian factions.  The majority of the community sided with Bishop Aftimios Ofeish and the pro Russian faction.  Fr. Abraham sided with the pro Antiochian faction and in June 1918 he resigned as pastor at St. Mary accepting the jurisdiction of Metropolitan Germanos (Shehadi) of Zahle.   At the request of the pro Russian faction in Pawtucket, Bishop Aftimios ordained a member of the parish, George Habib Nahas to serve as their priest.  For the next two years, Fr. Abraham continued to minister to the Antiochian faction, establishing a ‘home church’ at his residence, 269 Hunt Street in Central Falls, Rhode Island.

In December 1919 Fr. Abraham participated in the first national convention of the Syrian Orthodox Church which was held in Montreal, Quebec.  Metropolitan Germanos presided over the convention and attempted to consolidate his jurisdiction over the Syrian parishes.  On his return trip to Pawtucket, Fr. Abraham and Fr. Elias S. Hamaty of Kearney, Nebraska accompanied Metropolitan Germanos on a visit to St. George Syrian Orthodox Church in Lowell, Massachusetts, one of the communities loyal to the Patriarch of Antioch.

Following the death of Fr. George Maloof in October 1920, Fr. Abraham was petitioned to serve his home parish of St. George in Boston.  At St. George, he oversaw the completion of 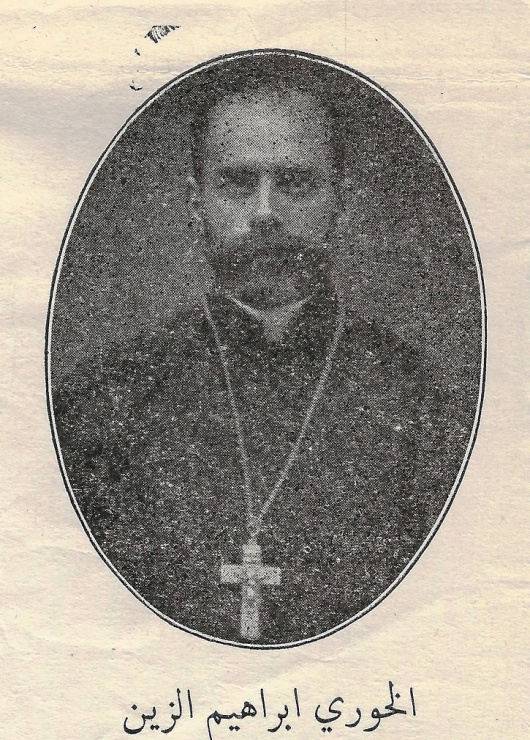 the building program at 154 Tyler Street began in 1917 by Fr. George Maloof.  Fr. Abraham remained just over one year at St. George of Boston, before returning to Pawtucket to continue his mission to the Antacky faction in Rhode Island.  Once again he established a ‘home church’, this time at his residence at 22 Woodbine Street and served there for another year.

In 1922 Fr. Abraham went to serve St. George Syrian Orthodox Church in Canton, Ohio.  The parish of about fifty new immigrant families was founded the year before and a new church had already been built.  While in Canton he completed the interior of the church and dedicated the Icons for the Iconastasis.  He commissioned the Icons from the iconographer, A. Abu Shakra working in Jerusalem.  The twenty eight Icons were received and installed on the Iconastasis in October 1923.

Fr. Abraham moved to Grand Rapids, Michigan in 1926 to serve the pro Antiochian faction of the community there.  The jurisdictional dispute at St. George parish resulted in the founding of a new church in 1923, St. Nicholas Syrian Orthodox Church.  Fr. Abraham served at St. Nicholas Church in Grand Rapids until his retirement in 1942.  In retirement, he moved to Florida and settled in Delray Beach.  Metropolitan Antony [Bashir] asked him to serve as a mission priest in Florida and he was instrumental in founding the parish of St. Mary in West Palm Beach in 1959.  His wife, Kh. Najla Zaine died in November 1960.

Fr. Abraham Shaheen Zaine died at his home on 4 May 1970 at age 91.  He had served as a priest for 54 years.  His funeral was served on 7 May at St. Mary Church by the Very Reverend Michael Husson, Dean of St. George Cathedral in Miami, assisted by a number of clergy from the area.  Fr. Abraham is buried at the Delray Beach Cemetery.

At the time of his death, Fr. Abraham was survived by a brother and sister in Damascus, seven children, 19 grandchildren, 21 great-grand children and one great-great-grandchild.