Choosing a Successor! A New Metropolitan for All North America.

With the repose of our beloved father in Christ, His Eminence Metropolitan +PHILIP on Wednesday March 19, we immediately faced the challenge of insuring our future as a united, dynamic and stable Antiochian Archdiocese in North America.  The security and unity of our Archdiocese was firmly established under his capable leadership and paternal care and we are now responsible for safeguarding this precious heritage.  The list of accomplishments under the archiepiscopacy of Metropolitan +PHILIP is a long one and every parish and family of the Church benefits from these noble endeavors.  Our children and their children are the deserving inheritors of a legacy created over the past forty eight years.   In the wake of his repose and in the shadow of his vision we are committed to guaranteeing a vibrant and enduring future for our God Protected North American Archdiocese.  Although, in our estimation, no one will ever replace Metropolitan +PHILIP, someone will soon be chosen as his successor.  We earnestly pray that the Holy Spirit inspire the process we now enter of selecting a new Metropolitan Archbishop for our Archdiocese.

Born in Venezuela, in 1967, Metropolitan +SILOUAN is the son of Jaudat Muci and Souad [Georges]. As a teenager, his family moved to Tripoli, Lebanon where he attended and graduated from the College des Frères de la Salle in 1985.  He then studied engineering at the École Supérieure d´Ingénieurs de Beyrouth (E.S.I.B.) of  the Jesuit Saint Joseph University in Beirut. He graduated as an electrical engineer with a major in Computer Engineering. He worked in Beirut and Paris as an analyst and project chief  developing software for Financial Institutions in the Middle East and Europe.

He was ordained a deacon in 1996 by His Eminence, Metropolitan Youhanna of Lattakia, Syria, and to the holy priesthood in 2000, with the rank of Archimandrite, by Metropolitan Paul of Aleppo. He served as a priest in 2001 in Sydney Australia and in Aleppo.  Patriarch Ignatius IV of Antioch consecrated him to the holy episcopate in October 2006 and he was elected by the Holy Synod of Antioch as Metropolitan of the Archdiocese of Buenos Aires and all Argentina that same year. 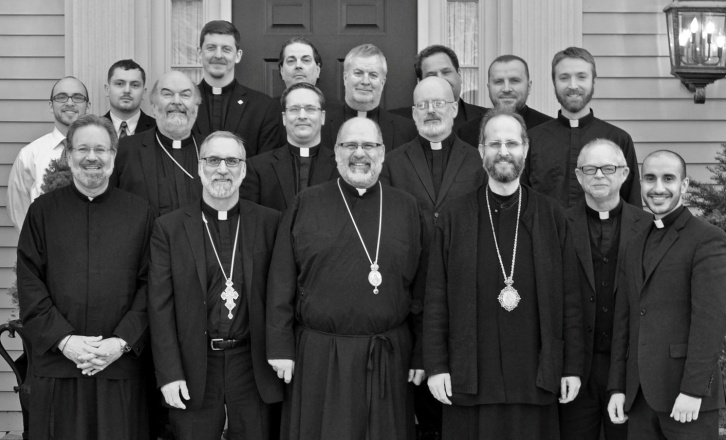 His first responsibility as Patriarchal Vicar was the overwhelming task of presiding over the funeral preparations for beloved father in Christ.  His tranquil demeanor and sincere compassion provided a measure of peace which allowed us to face the awesome events of that week with a sense of calm and hope in the mystery of eternal life and resurrection.  Metropolitan +SILOUAN’s repeated message in his homilies and meetings with us was one of assurance for the integrity and welfare of our Archdiocese and a stable transition as a new leader is selected.  Following the funeral of Metropolitan +PHILIP, he began a series of visits to each diocese of the Archdiocese to meet with the clergy and laity of each area.  The week after the funeral he visited New England and met with our clergy at the home of Bishop +JOHN.  He engaged us for the afternoon in a discussion of the role of leader as servant to all.  Again, he emphasized his commitment to defending the harmony and unity of our Archdiocese and working for a tranquil transition as we deliberate and choose a successor to Metropolitan +PHILIP.

By early July, we should have confirmation of a new Metropolitan being elected for the Self-Ruled Antiochian Orthodox Archdiocese of North America.   Our local Synod of Bishops and Board of Trustees are scheduled to meet in Chicago on 13 – 14 May under the direction of Metropolitan +SILOUIN  to discuss, among other items, the list of eligible candidates  for the office of Metropolitan and the official procedure for voting.  A Special General Convention of the Archdiocese has been called for Thursday, June 5 in Chicago at which time we will vote for a new Metropolitan.  According to our constitution, the names of the three individuals receiving the most votes will then be submitted to the Patriarch of Antioch and an election will be held by the Metropolitans of the Holy Synod of Antioch.  That election is slated to take place at the Belamand Monastery in early July.

Let us pray fervently that the All Holy Spirit inspire and enlighten us in the awesome task of choosing a worthy successor to our most beloved Metropolitan +PHILIP.  We pray that this choice inspire all of us to greater solidarity with our Mother Church and continued prosperity in building up the Church of God here in North America.