Written in the rather Victorian style of the day, complete with its own self centered perspective, the reporter takes his Boston reader on a sort of expedition into an exotic and foreign land that, in his own opinion, he alone has been uniquely privileged to enter.  Despite his own particular biased, this reporter uses his keen regard for detail and personal inquisitiveness to relay a charming story of the day to day life of the city’s first ‘Syrian’ immigrants.

The unnamed reporter begins his tour on Edgerly Place, which he describes as a “very narrow alleyway directly in the rear of that part of Boston known as Chinatown”.  He then introduces us to the Arabs he encounters saying that, “there lives a colony of swarthy people who have brought all their traditional customs with them from their fatherland, and who live there in their own way, unconscious and unconcerned regarding the manners of the Americans, and who, in their peculiar style, live happily and naturally”.  “They are”, he reports, “the Syrians, coming from Damascus, Mt. Lebanon, and other places in the Holy Land and Turkey”.  At the time there were perhaps as many as 1500 immigrants from the Ottoman Empire living in the surrounding neighborhood.  Nearly all of them had arrived during the preceding few years.  The newsman spent two days exploring the neighborhood and partaking of the everyday life of its residents.  Milham Kadra, the ‘Mayor of Little Syria’, served as his official guide and interpreter. 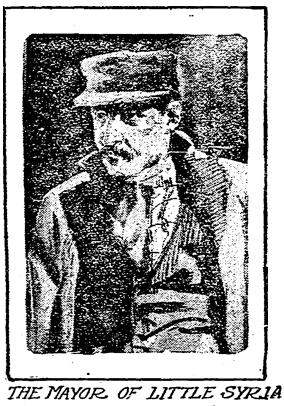 A native of Douma, Mt. Lebanon, Milham arrived in Boston in 1887 as one of the very first ‘Syrian’ immigrants, he was only thirteen years old at the time.  Now, with his wife Sadie [Karam] and their two children he lived at nearby Oliver Place.  At first he worked as a peddler of notions and sundries while studying and quickly becoming proficient in English.  He then worked as a court interpreter, assisting his fellow immigrants with the intricacies of the American legal system.  After saving enough money, he opened his own dry goods store and supplied a cadre of peddlers.  With his wife, he operated a profitable boardinghouse at their residence at 141 Oliver Place.  Milham had a controlling interest in many of the Syrian owned businesses in the district.   The reporter noted that, “when a fellow countryman is in trouble ‘Mayor’ Kadra is the first from whom counsel is asked”.  Milham was among the early supporters of the newly founded St. George Syrian Orthodox Church of Boston.  He also assisted in establishing the Syrian parish in Springfield. He eventually purchased a farm in Ashland and operated it until his death in 1946.

On those two spring days in 1901, the ‘Mukhtar’ saw to it that, for the Herald reporter, “everything worth visiting was seen, everyone worth calling on was visited and everything eatable was eaten”.  The visitor goes on to say that he, “still lives to tell the tale, a tale never before made public, for these people are very suspicious of newspaper men”.

His first encounter is with a group of Syrian women carrying baskets and satchels and, “dressed in their peculiar costumes of gaily colored creations.” “Nearly everyone”, he writes, “has certainly come in contact with these women.  They go from house to house laden with a huge bag or basket filled with combs, small mirrors and fancy goods”.  He admires their persistence noting that, “if they cannot sell you anything they will convince you, especially if you are a woman, that you ought to have your fortune told, and the peddler succeeds in getting your quarter”.

In a courtyard at the end of the street he enters what he describes as, “one of the most picturesque places in Boston”.  It’s Sunday afternoon and families have gathered in the out of doors coming from the surrounding streets and even from nearby towns to enjoy one another’s company on a present spring day.  “Surrounded with their many children”, the reporter observes “who seem to be about the same age and size, sitting or standing in groups of all sizes, all talking at once with the men entertaining themselves, lounging around in their carefree, happy manner, smoking their cigarettes or nargilehs, the Turkish water pipe while some other fellow is passing the Arrack around and the whole atmosphere teems with Bohemian good feeling”.   After being introduced to everyone he engaged in a “quite animated” conversation with several of the English speakers.  Comfortable with the visitor, the men invited him to join them in a drink as one of them handed him a glass of Arrack.  Never having sampled this exotic libation, the reporter accepted the glass with a cautious smile.  Sensing his reluctance, the men assured him that, “it was ‘tyib’, good.  He drank it, and it was ‘tyib’.”

On Oxford Street, ‘Mayor’ Kadra and his guest visited the home of Bolous and Sophie Hadge.  The reporter relates that, “After walking up a long flight of stairs he was ushered into the rooms, where he was greeted by a woman of about twenty years old.  She had black, wavy hair, eyes of the richest hazel, and features slightly aquiline, but regular.  Her complexion was of the most pronounced brunette, and she possessed a noble, spiritual expression, indicative of the highest character.  Another young woman, whose age was said to be eighteen, was of a similar handsome type.”  After being introduced to several men at the home, he was greeted, “with most profuse exclamations of welcome” and given the seat of honor in the family’s parlor.  He describes the Hadge home as being decorated with, “broad cushioned divans lining the walls, while heavy and brilliantly colored rugs were strewn about the floor.  In the center of the room several small handsomely carved tables were seen, wonderful examples of the hand carving of the Syrians.  They were inlaid with pearl and were inscribed in Syrian.  On the tables were large clusters of paper and real flowers, colored candlesticks, perfumery of gold and incense holders of silver and gold.”

One of the women prepared a nargilehi for their distinguished guest.  He describes how she rolled the tobacco and prepared the charcoal before offering him the pipe.  He remarked that, “He had never smoked one of these machines before, and the operation was not a success.  After being shown by the woman how to do it he again started very bravely, but before long a very peculiar dizzy feeling crept over him and soon the whole room was whirling around him and he was gone.”

Obviously overcome by the hospitality he enjoyed at the Hadge home, his exuberance was soon outdone by what happened next.   Describing it as a “remarkable event”, the reporter relates how he was privileged to witness a Syrian Orthodox wedding.  Early in the evening, Fr. George Dow Maloof arrived at the Hadge home to celebrate the marriage of the eighteen year old Fahoom Hadge to Habib Ferrin.  Marriage records for Boston show that 18 year old Fahoom Hadge, daughter of Bolous and Sophie of 22 Oxford Street, a dressmaker married Habeeb Ferrin, son of George and Helena, a 25 year old actor from Syria on Sunday, 21 April 1901.

The reporter describes how the home was suddenly transformed into a church as “all their countrymen came to do them honour.”   He identifies the attendants as Nazeera El Kazin and Hanny Saleh.  He describes that a, “respectful silence reigns through the house as the bride is escorted to stand beside her bridesmaid.  The bridegroom, dressed in a splendid robe is positioned next to his bride and the priest proceeds to place a floral crown first on the head of the groom and then on the head of the bride.  The priest then places rings on the couple’s fingers while offering blessings and prayers.  He then ties a piece of ribbon around the neck of the groom, which remains there until the following day when he returns to take it off.  The priest then congratulates the couple and, after drinking to their health, departs.”

To be continued next month……….