“Calling to Remembrance…The Parish history series will continue next month.

In describing the wedding ceremony he relates a curious detail which must have been a local cultural custom.  He relates that, at the conclusion of the wedding service, Fr. George took a length of white ribbon and tied it around the neck of Habeeb Ferrin the groom.  The next day, Fr. George returned to the home and removed the ribbon signaling that the wedding reception could officially begin.

Elias F. Alkazian hosted the party at his ‘Turkish Café’ around the corner on Beach Street.  Alkazian’s café was the unofficial ‘headquarters’ for the Syrian community in Boston during the height of the immigration.  Elias and his brother, Mehsan, arrived in Boston from Beirut in 1894.  A successful merchant in Syria, he opened his restaurant on Beach Street and enjoyed immediate popularity with his fellow countrymen. Elias operated the ‘Turkish Café’ until 1908 when he married Nazira [Abiselah] and settled in Old Orchard, Maine.

For the reception, the café had been “fitted up in a sumptuous manner. Everything was red, beautiful draperies covered the walls; rich rugs were strewn about the floor and around the walls were divans which were covered with a deep crimson plush.  On these divans were many gold-embroidered pillows.”  The whole atmosphere was enlivened by musicians, singers and dancers.  The fifty some guests quickly joined in the singing.  He recounts that from time to time “they would let out a general zilareet, or yell, that sounded like a lot of Indians on the warpath.”  It was explained, however, that this shrill vibratory cry that sounded like “Heel, li li li li” was actually a traditional expression of great joy. The reporter noted that the women “are graceful dancers, and their efforts are treats, such as an outsider seldom sees.”  The celebration extends throughout the evening and into the night as arrack, wine and cordials are passed around the room.  The center of the café was decorated with a large table overflowing with “sweet meats, fruits, coffee and other dainties.” 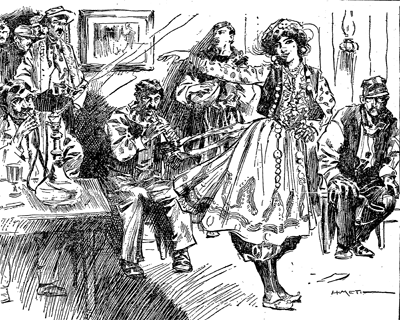 The reporter was given a seat of honor next to ‘La Bella Rosa’, a renowned ‘Turkish’ folk dancer.  She was actually Mrs. Rosa Saleh of the community and she had gained a favorable reputation as a folk dancer throughout the region.  Throughout the evening she led the dancing as the bride and other women joined in.  The full page story of the weekend’s events that ran in the Herald features an artist’s sketch of ‘La Bella Rosa’ and the musicians entertaining the wedding guests.  Based on his three days experience visiting the ‘Syrian Colony’, the reporter comments that “dancing, singing and having a general good time is one of the principal features in the life of the Syrians.”

This endearing account featured in the Boston Herald one hundred and thirteen years ago provides a rare glimpse into the daily lives of our forebearers.  The accompanying illustrations show a community enjoying life and celebrating the blessings of their newest wedded couple.  We can be thankful for their enduring spirit and the gift of joy that they so graciously passed down.