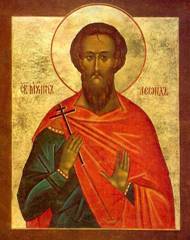 Near the end of the first century, Leontius was the Roman military commander at Tripoli in Phoenicia [Lebanon].  Leontius is described as being 'of great physical stature, powerful, strong and bold in battle'.  When it was learned that Leontius was a follower of Jesus, the governor, Hadrian, being a fierce adversary and persecutor of Christians, sent a military detachment to seize Leontius. The commander of the detachment, Hypatius, fell ill on the way with a grave fever and the unit had therefore to slow its pace. One night an angel of the Lord appeared to Hypatius and said to him: 'If you desire to be healed, you and your soldiers must cry to heaven three times: "O God of Leontius, help me!"

Hypatius told his soldiers about this vision, and they all shouted together as the angel had instructed him, and Hypatius was immediately healed. This miracle amazed them all, and especially a certain Theodulus. Then Hypatius and Theodulus went on ahead to find Leontius who received them courteously. As Leontius expounded on his faith in Christ, their hearts turned toward the Lord and a bright cloud descended upon them.

In this way the Holy Spirit baptized the two soldiers. When Harden discovered that Hypatius and Theodulus had become Christians he ordered that they be tortured and executed. Then Hadrian ordered that Leontius be tortured until he renounced his faith.  Leontius remained unwavering in his love for Christ and angels of the Lord appeared to comfort and encourage him.  Finally he was tortured and gave his soul to God. St. Leontius died in the year 73.  St. Leontius' sufferings were witnessed by Notarius, who recorded all that he saw on tablets and placed them in the martyr's grave.  His grave was venerated by Christians and a church was built there in the forth century becoming a popular destination for pilgrims.