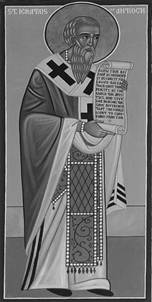 Tradition has it that it was the young boy Ignatius whom Christ took upon his knee to explain to His followers that they must become as children to enter the Kingdom. Ignatius knew the Apostles personally and he was a disciple of St John the Evangelist. He was the second Bishop of Antioch His flock called him the God-Bearer, for he said that all Christians after their Baptism are truly Bearers of Christ, clothed in the Holy Spirit.

The holy Bishop devoted himself to organizing the young Church on strong foundations. He established the principle that the Grace imparted to the Apostles at Pentecost was handed down to the bishops appointed by them, and so on through the generations: we call this Apostolic Succession.

When the Emperor Trajan initiated a persecution of Christians, Ignatius presented himself to the Emperor and eloquently declared his faith in Christ.  "So you are a disciple of the one crucified under Pontius Pilate?" asked the Emperor. "I am the disciple of Him who has nailed my sin to the Cross, and has trodden the Devil and his devices underfoot." "Why do you call yourself the God bearer?"  "Because I carry the living Christ within me!" "Then let the bearer of the Crucified One be taken in chains to Rome, and fed to the lions for the amusement of the people."

During the journey to Rome he wrote a series of letters which remain one of the treasures of the Church. In Rome he was taken to the amphitheater and, as his biography states; "entered the arena as though approaching the holy altar to serve his last Liturgy in the presence of the faithful, who were crowded among pagans on the steps of the amphitheatre." In a few moments he was completely devoured. His bones were gathered by the faithful and returned to Antioch.

In his Letter to the Romans, the holy Bishop wrote; "I am the wheat of God, and am ground by the teeth of the wild beasts, that I may be found to be the pure bread of God."