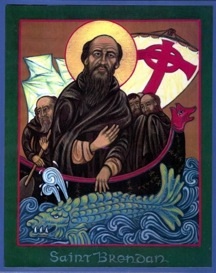 Brendan the son of Findlugh was born in 484 at Tralee in Kerry, Ireland. As a child, he was educated by St. Deirdre, the abbess who was foster mother to several Irish saints.  As a teenager, the sainted Bishop Ere supervised Brendan's theological education until Brendan became a monk at the nearby monastery of Ardfert.

In time, Brendan became the abbot and established several other monastic communities. On Brendan Hill in Kerry there are still ruins of St. Brendan's Chapel surrounded by ancient stone monastic huts. A renowned navigator, Brendan sailed the surrounding seas and established monasteries in Scotland, Brittany, Wales and France. His principal monastic establishment was Clonfert Abbey in Galway. At Clonfert he headed a community of over 3,000 monks.

The ninth century Latin saga, Navigatio Brendani (The Voyage of Brendan) recorded his voyages to unknown lands far to the west of Ireland.  The account tells of his Atlantic voyage in search of "The Land of Promise".  Brendan and his monks built a large seaworthy coracle - a type of boat still used in Ireland, consisting of a wicker frame covered with leather. Brendan and 14 monks set sail from Ireland, and discovered many lands. Among the islands they visited, one was covered with birds, another with sheep, another with grapevines, and yet another spouted fire. They saw pillars of crystal floating by. They halted on Easter to celebrate Liturgy on a small barren island, and then built a breakfast fire. When the fire was kindled, the island suddenly started moving. The travelers quickly clambered aboard their boat and watched the supposed islet speed away. They had landed on a sleeping whale! Eventually the monks reached their destination in the far western Atlantic. Then they sailed back to Ireland.

In 1976-77 the explorer Tim Severin and a few colleagues built a large leather boat of the same type and made the journey from Ireland to Newfoundland. En route they noted islands full of birds and sheep, and vines, as well as fire spouting volcanic islands that could have been those described in the saga of St. Brendan. The pillars of crystal could have been icebergs. Severin's trip proved that an ocean voyage in such a boat was possible. Interestingly enough, there are modern stories of sailors disembarking on quiescent whales.

The account provides strong evidence that Irish navigators visited Iceland, Greenland and even North America as early as the 6th century, 300 years before the Vikings; some assert that St Brendan himself directed these voyages.

Because of the wide circulation of the Brendan saga, the Irish monastic founder became known throughout Europe. All the old maps showed his fabulous "Land of Promise," (also called "San Brendan," "The Fortunate Isle," or " Hy-Brasil"), indicated in the western Atlantic.

Brendan spent his last years at his monastery. He died while visiting his sister Brig, a nun, in Annaghdown. He was buried in Clonfert cathedral in Galway.