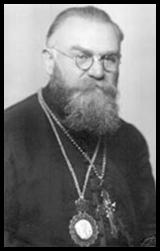 Bishop of Prague and Czechoslovakia.

Matthias Pavlik was born on May 26, 1879, in Moravia, later known as the Czech Republic. Born into a Roman Catholic family, Matthias studied at the Catholic theological faculty and was ordained a priest. As a student he was interested in the mission of Ss. Cyril and Methodius and of the historic Orthodox Faith of his ancestors. With the establishment of Czechoslovakia at the end of WW1 many of the Slavic people of the region returned to the Orthodox Church of their heritage, including Fr. Pavlik .  The Serbian Orthodox Church received the new converts. As a leader in Czechoslovakia, the Serbian Church decided to consecrate Fr. Pavlik as a bishop for his homeland. On September 24, 1921, was consecrated Bishop of Prague taking the name Gorazd, a disciple of St. Cyril.

In 1938 the Nazis invaded Czechoslovakia and SS-Obergruppenfuher Reinhard Heydrich was assigned as ruler. On May 27, 1942, Czech resistance fighters' assasinated Heydrick near the Orthodox Cathedral of Ss. Cyril and Methodius in Prague.  In their escape, the group took refuge in the Cathedral. Bishop Gorazd saw that they were cared for and sheltered. On June 18, the Nazis discovered the hiding place and the all members of the resistance group were killed.

Because of these actions the Orthodox Faithful, led by their bishop, proved the qualities of their Church in bravery and devotion to the cause of justice. On May 4, 1961, the Serbian Orthodox Church recognized Bp. Gorazd as a martyr, and on August 24, 1987, he was glorified as a saint in the Cathedral of St. Gorazd in Czechoslovakia.