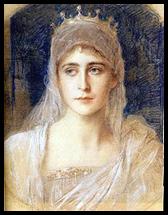 (1918) July 5th  Grand Duchess Elizabeth was a grand-daughter of Queen Victoria of England and the older sister of the Empress Alexandra of Russia. She converted to the Orthodox Faith after her marriage to the Grand Duke Sergei Romanov. Elizabeth became famous in Russian society for her beauty, charm, and good works among the poor. Her husband was assassinated by an anarchist in 1905.

After the assassination, Grand Duchess Elizabeth gave away her magnificent collection of jewels and sold her other luxurious possessions; even her wedding ring was not spared. With the proceeds she founded the Convent of Sts. Martha and Mary and became its abbess. She soon opened a hospital, a chapel, a pharmacy and an orphanage on its grounds. Elizabeth and her nuns worked tirelessly among the poor and the sick of Moscow. She often visited Moscow's worst slums and did all she could to help alleviate the suffering of the poor.  She visited her husband's assassin in prison and asked him to repent and seek forgiveness from God.

Elizabeth had a cross erected at the site of her husbands death, bearing the inscription "Father, forgive them, for they know not what they do." After the Communist revolution, the cross remained standing through the devotion of the people of Moscow to St Elizabeth.  In the early 1920's it was personally torn down by Vladimir Lenin.

During the Russian Revolution, she was seized by the Bolsheviks and taken to the Urals, where she and several with her were martyred by being thrown alive down an abandoned mine-shaft. When the fall did not kill them, soldiers threw grenades down the shaft to complete their work. Saint Elizabeth was singing the Cherubic Hymn when she died.
A nun of her convent, Mother Barbara, voluntarily followed St Elizabeth into exile and received martyrdom with her. Their relics were recovered and taken at great risk to China, then to Jerusalem, where they were deposited in the Convent of St Mary Magdalene. When their reliquaries were opened in 1981, their bodies were found to be incorrupt, and gave off a sweet fragrance.  Her shrine in Jerusalem remains a popular place of pilgrimage.