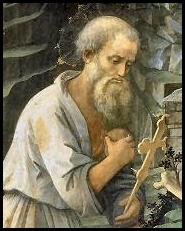 St. Hilarion was born at Tabatha near Gaza, Palestine, in the year 291. His pagan parents sent him, while still a youth, to study at Alexandria. He was remarkable for his diligence and good manners, and he shortly became a convert to Christianity, making great progress in faith and charity. He was zealous in visiting churches, in fasting and prayer, in scorning all earthly joys and pleasures. Lured by the fame of St. Anthony, Egypt's illustrious hermit, he entered the desert and for two months remained his disciple. While absent, his parents died. Now Hilarion gave all he had to the poor, and although hardly fifteen years old (306), he returned to the desert, built a little hut scarcely large enough to accommodate himself, and slept on the bare ground.

Most of his time was spent in reading and in meditating upon Holy Scripture. A few figs and a little soup from herbs sufficed for his nourishment, but this he never took before the setting of the sun. Because of his mortifications and humility, he triumphed over fierce assaults by the evil one and healed many who were possessed. After founding numerous hermitages (he had two thousand followers) and working countless miracles, he became ill at the age of eighty. In his last agony he encouraged himself by saying: "Go thither, my soul, why do you fear? Why do you tremble? Seventy years you have served Christ, and now you fear death?" The day of Hilarion's death is given as October 21, 371. His grave is on the island of Cyprus. St. Jerome wrote the life of the holy hermit twenty years after his death.