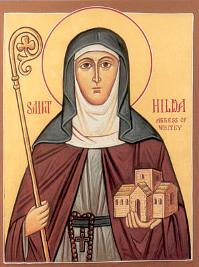 St Hilda of Whitby was born in the year 614 A.D. into the royal house of Northumbria, Britain.  At the time of her birth her great-uncle was the King of Northumbria.  She was baptized at the age of thirteen when the royal household embraced Christianity. A famous bishop of the church, St. Aiden, had a great influence on Hilda.  When she decided to serve the church as a nun, Bishop Aiden appointed her the Abbess of a monastery.  In the 657 Hilda moved to Whitby to found a new monastery in a rugged coastal area.

The Venerable Bede comments that 'Hilda carried out her appointed task with great energy.  She established the same regular life as in her former monastery and taught observance of righteousness, mercy, purity and other virtues, but especially in peace and charity'.

Commoners, Kings and Bishops came regularly to her for spiritual counsel, and she was in her own lifetime regarded as the Mother of her country.  Hilda continued to rule her abbey, upholding the ideals of poverty, chastity and simplicity, and continued with her role of training clergy, educating children and adults, sending out preachers and training scribes in the copying of manuscripts.  The scribes' diligent work ultimately produced an impressive library at Whitby. When St. Hilda died at age 66 in 680, she bequeathed a thriving, complex community which she had administered with authority, energy and flair.

The Orthodox Synaxarion notes that, "Saint Hilda, belongs to that monastic company of women of royal birth who exercised a formative influence in the Church of the seventh century, but she is also a rare example of a spiritual Mother, who received from God the gift of directing not only nuns but monks and bishops as well; for in the Lord Jesus there is neither male nor female, but a new creation (Gal. 3:28)."