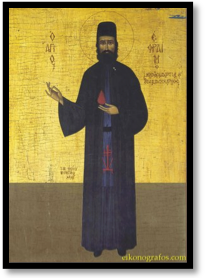 During the reign of the Byzantine Emperor Anastasius, Ephraim was governor of the eastern regions.  He was famed for his great piety and compassion, and was much esteemed for these virtues.  When the rebuilding of Antioch, which had been destroyed by earthquake and fire, was put in hand, the Emperor ordered Ephraim to oversee the work.  Ephraim performed this work with diligence and love.

There was among the ordinary workers a certain bishop who had left his see for unknown reasons and was working as a laborer.  Not a soul knew that the man was a bishop.  One day he lay down to take a rest from the exhausting work with the other laborers, and fell asleep.  Ephraim glanced at him, and saw a flaming pillar rising above the man and reaching up to heaven.  Amazed and frightened, Ephraim summoned him and bound him under oath to reveal who he was.  The man hesitated a long time, but finally admitted that he was a bishop and foretold that Ephraim would shortly be consecrated Patriarch of Antioch (the patriarchal throne having been empty since the old Patriarch, Euphrasius, perished in the earthquake).

Ephraim was indeed elected and consecrated as Patriarch.  For his goodness, purity and zeal for Orthodoxy, a great gift of wonderworking was given him by God.  Once, in order to convince some heretic that Orthodoxy is the true Faith, he placed his omophor in the flames and prayed to God.  The omophor remained unharmed in the fire for three hours. When the heretic saw this, he was afraid and cast his heresy aside.  Ephraim entered peacefully into eternal rest in 546.