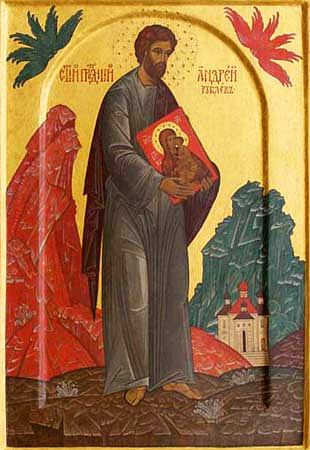 There is little information about the life of Andrei Rublev.  Not much is known of his early years, it is not known where he was born, and even the exact year of his birth is uncertain, sometime between 1360 and 1370.  Nothing is known about his family.  We do know however, that he was a very talented painter who was able to master the art of iconography under the expert tutelage of the renowned Icon painter Theophanes the Greek.  Theophanes was among the last of the great Byzantine masters and he adopted Russia as his home.  In 1404, together with his student Andrei Rublev, they decorated the Cathedral of the Annunciation in the Moscow Kremlin with spectacular frescos and icons.

Later, in 1408, Andrei decorated the Cathedral of the Dormition at Vladimir where he revealed his own highly spiritual and distinctive style of art that was to become the standard for Russian iconography to the present day.  In Rublev's art, two traditions are combined: the highest asceticism and the classic harmony of Byzantine mannerism. The characters of his paintings are always peaceful and calm. The major icons on the west wall here at St. George Church are painted in the tradition of Rublev. From 1425–1427 he decorated the Cathedral of the Holy Trinity in the Trinity-Sergius Monastery. He is also believed to have painted the miniatures in the Khitrovo Gospels at this time.  Andrei then went to Moscow's Andronikov Monastery where he painted the frescoes of Christ the Savior Cathedral.

Many consider Andrei Rublev the greatest iconographer of all time.  His "Holy Trinity" is regarded as the finest of all icons and is currently in the Tretyakov Gallery in Moscow. This icon is based upon an earlier icon known as the "Hospitality of Abraham". Rublev however, removed the figures of Abraham and Sarah from the scene and through a subtle use of composition and symbolism changed the subject to focus on the Mystery of the Holy Trinity.

Andrei died at the Andronikov Monastery in Moscow on January 29, 1430, but even this date is disputed. The sublime quality of his work has influenced countless later artists and iconographers.  In 1551 the Russian Church declared Rublev's icon style as the model for church painting and Orthodox iconography. Since 1959 the Andrei Rublev Museum has been open at the Andronnikov Monastery, displaying his works and the art of his era. 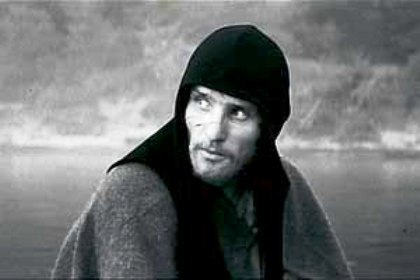 In 1966, the acclaimed Soviet film director Andrei Tarkovsky produced his celebrated movie ‘Andrei Rublev’ based on the iconographers life.  The film depicts Andrei as "a world-historic figure" and presents "Christianity as an axiom of Russia's historical identity".  Given the turbulent period of Soviet Russian history in which the film was produced, the movie was a daring venture into the spiritual and cultural heartland of the Russian people.

In the film Andrei Rublev, the ringing of a church bell triggers the film’s first relieving moments. The bell seems to represent the irony of a world founded on self-contradiction and the life lived “between the times.” This setting provides the material from which Andrei bears witness. The prophet beckons from the purview of the bell’s authoritative presence and cathartic resonance.  Slowly, the first glimpses of color begin to overcome the screen, as if consuming all of the events that transpired before it.  Burnt orange emanates from the screen as the camera pan’s closely across the surface of Andrei’s icons, seemingly representative of the baptismal fire (Matt. 3:11). A fire which consumes, cleanses and resurrects, indeed, presenting itself as a challenge to evil’s unrelenting adage– “Long live death!”. The film concludes with a view of ‘The Holy Trinity’, inviting the audience to gaze into the very face of God Himself.  The icon provides a window into divine things, a deterrent from material idolatry, and the abuse of power.  We are admonished to take up our proper residence under the authority of the true King, where judgment and beauty, intimacy and grace, truth and love, exude from a single Countenance.

Andrei Rublev was canonized a saint in 1988 by the Russian Orthodox Church. The church celebrates his feast day on July 4th. 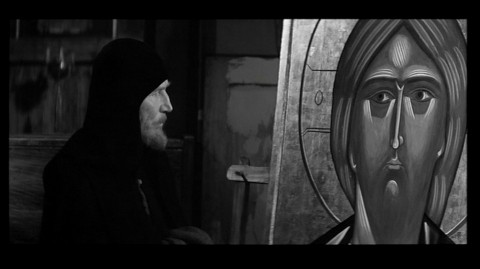