St. Gregory the Great was born in Rome to a wealthy senatorial 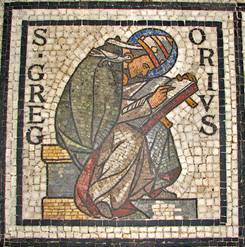 family.  His father, Gordianus was an important senator and a pious Christian who was known for his charity and care for the poor and needy.  His mother Silvia was also of an important Roman family.  She is honored as a saint, her feast being kept on 3 November. Besides his mothers, St. Silvia, two of Gregory’s aunts were also canonized, Gordianus's two sisters, St. Tarsilla and St. Emiliana.  The historian, John the Deacon speaks of Gregory’s education as being that of a saint among saints. Portraits of his parents, Gordianus and Silvia were painted by Gregory's order, in the atrium of St. Andrew's monastery in Rome, and a pleasing description of these is found in the writings of John the Deacon (Vita, IV, lxxxiii).

Gregory received a good education in secular and spiritual learning, and became Prefect of Rome.  While still in the world, he used his great wealth and influence for the good of the Church, building six monasteries in Sicily and another in Rome itself.  At this monastery, dedicated to the Apostle Andrew, Gregory was tonsured a monk.  He was appointed Abbot of the monastery and later Archdeacon of Rome.

In 579, the Lombards were advancing rapidly towards Rome, and the only chance of safety seemed to be in obtaining help from the Emperor Tiberius at Constantinople. Pope Pelagius II sent a special embassy to Tiberius, and sent Gregory as his permanent ambassador to the Court of Byzantium.

Nothing could have been more uncongenial to Gregory than the worldly atmosphere of the brilliant Byzantine Court, and to counteract its dangerous influence he followed the monastic life so far as circumstances permitted. This was made easier by the fact that several of his brethren from St. Andrew's accompanied him to Constantinople. With them he prayed and studied the Scriptures, one result of which remains in his "Morals", or series of lectures on the Book of Job, composed during this period.

While at Constantinople, Gregory entered into a controversy with Patriarch Eutychius concerning the Resurrection. The Patriarch had published a treatise on the subject maintaining that the risen bodies of the elect would be "impalpable, lighter than air".  To this view Gregory objected the palpability of Christ's risen body. The dispute became prolonged and bitter, till at length the emperor intervened, both combatants being summoned to a private audience, where they stated their views. The emperor decided that Gregory was in the right, and ordered Eutychius's book to the burned. The strain of the struggle had been so great that both fell ill. Gregory recovered, but the Patriarch died, recanting his error on his death bed.  Gregory returned to Rome in 585 and was elected Pope in 590.

He is famed for his many writings, his generous charity (he gave almost all his income to the poor, and often invited the poor to share his table), and for initiating missionary work among the Anglo-Saxon peoples. The Liturgy of the Presanctified Gifts, celebrated on Wednesday evenings during Great Lent, was compiled by him. St Gregory introduced elements of the chanting that he had heard in Constantinople into Western Church chant: The Gregorian Chant which beautified the Western churches for many years is named for him. Its system of modes is related to the eight tones of the Eastern Church. He is called 'the Dialogist' after his book The Dialogues, an account of the lives and miracles of Italian saints. Saint Gregory reposed in peace in 604.