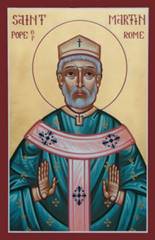 Martin, one of the noblest figures in a long line of Roman pontiffs was of noble birth, a great student, of commanding intelligence, of profound learning, and of great charity to the poor. He was a monk who followed the Rule of St. Basil the Great.

Martin became Pope of Rome on July 5th, 649, at the time of a furious quarrel between the Orthodox and the Monothelite heretics. Constans the Second was the Emperor of Byzantium at the time, and Paul was the Patriarch of Constantinople. In an effort to restore peace in the Church and the Empire, the Emperor himself wrote a dogmatic decree, the Typos, which leaned heavily towards heresy.

Pope Martin summoned a Council of the Church and 105 bishops from throughout the world attended. At the Council, the bishops condemned the Emperor's heretical statement.  At the Council twenty canons were enacted defining the Orthodox doctrine on the two wills of Christ. The decrees signed by the Pope and the assembled bishops were sent to the other bishops and the faithful of the world together with an encyclical of Martin.  At the same time, the Pope wrote a personal letter to Patriarch Paul, begging him to uphold the purity of the Orthodox Faith and to counsel the Emperor to reject the theories of the heretics. Pope Martin’s letter infuriated both the Patriarch and the Emperor. The Emperor sent one of his generals to bring the Pope to Constantinople in bonds. The general did not dare to bind the Pope with his own hands, but instructed one of his soldiers to kill him with the sword in church.  When the soldier entered the church with his sword concealed, he was instantly blinded. So, by the providence of God, Martin escaped death.

By the intrigues of the heretic Patriarch Paul, the Emperor sent a second general, Theodore, to bind and take the Pope on the charge that he, the Pope, was in collusion with the Saracens and that he did not reverence the most holy Mother of God.  When the general arrived in Rome and read the accusation against the Pope, he replied that it was a libel; that he had no contact of any sort with the Saracens, the opponents of Christianity, 'and whoever does not confess the most holy Mother of God and do her reverence, let him be damned in this age and in that which is to come.' But this did not affect the general's decision. The Pope was bound and taken to Constantinople, where he lay long in prison in great sickness, tortured by both anxiety and hunger, until he was finally sentenced to exile, where he lived for two years before his death.

In 655, Pope Martin of Rome gave his soul into the hands of the Lord, for whom he had suffered so greatly. The heretical Patriarch, Paul of Constantinople, died two years before him and, when the Emperor visited him on his deathbed, he struck his head against the wall, confessing with tears that he had greatly sinned against Pope Martin and asking the Emperor to set Martin free.

The Greek Church honors him on 13 April and 15 September, the Russian Church on 14 April. In the hymns of the Greeks he is styled ‘infallible defender of the faith’ because of his defense of orthodox belief as the successor of St. Peter in the See of Rome.