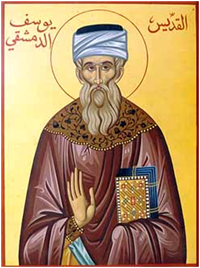 He received extensive tutoring in Arabic literature, logic, rhetoric and philosophy from the renowned Moslem scholar, Mouhamad El Attar.  He also studied Hebrew under a respected Jewish scholar and memorized large portions of the Hebrew Bible [Old Testament] as well as the Torah [Jewish commentary on Scripture].  Under the guidance of the Greek Orthodox scholar, George Shaddah Sabagh, Joseph mastered Greek and the classical commentaries of the Church Fathers on the New Testament.

On 9 July 1860, Druze and Moslem extremists in the Lebanese mountains began a brutal campaign against the Christians. With the backing of the Turkish authorities, marauding bands of fanatic militiamen pillaged and decimated Christian villages, desecrating churches and monasteries, murdering innocent men, women and children, including numerous priests and nuns.  The massacres increased and spared unabated at an alarming rate.   Many Christians abandoned their homes and villages and fled to the relative safety of Beirut.  Among the refugees were Michael and Mariam Hawaweeny of Damascus.  Mariam was with child at the time and soon gave birth to her son Raphael.  Raphael became the first ‘Syrian’ bishop in America and the first Antiochian Saint for North America.

As the holocaust quickly spread to Damascus, many local Christians, both Orthodox and Catholic, took refuge in the Patriarchal Cathedral and the Orthodox monastery at Bab Tuma Gate.  During the ensuing panic, Fr. Joseph made his way through the Old City ministering to the elderly and infirm, those too weak to abandon their homes in face of the coming onslaught.  Traversing the rooftops of the Old City, Fr. Joseph made his way to the Cathedral to care for the terrified refugees.

On the morning of Tuesday, 10 July, a mob of anti-Christian terrorists surrounded and sacked the Cathedral, desecrating the sanctuary and massacring the innocent refugees before finally setting fire to the Church.    Those inside who survived the initial attack perished in the flames.  Over 3,000 innocent Orthodox and Melkite Christians died in the Cathedral of the Dormition on that day.  A few, including Father Joseph, survived. He searched the narrow streets for survivors who needed assistance, binding their wounds, hearing confession and administering communion.  Later that day a band of ruthless terrorists discovered and surrounded him.  Father Joseph consumed what remained of the Eucharist he was carrying as the savage extremists attacked and killed him with swords and axes.

At the end of the nineteenth century, some thirty-nine years after his death, Amin Kairala mentioned in his book “The Fragrant Aroma” that the elderly of Damascus were still reiterating some of the sermons of Father Joseph. The echo of his sermons were still resonating in the early twentieth century when the Melkite writer, Habib Al Zaiat, extols Father Joseph of Damascus as renowned among the Christian Arabs for his knowledge and preaching.

In his sermons, Father Joseph was noted for his convincing and irrefutable answers to questions of faith and religious practice.  According to the eminent historian, Issa Iskander Al Maloouf, Father Joseph had a quiet voice that could be heard from a distance. People used to listen intently to his words, with longing and enjoyment and to emulate his advice and keep his commandments.

Along with his sermons, he was diligent in comforting the broken hearted, in consoling the grief stricken, in helping the destitute and in strengthening the weak. In 1848, when the yellow fever spread in Damascus, Father Joseph showed great courage in ministering to the sick and burying the dead without regard of catching this infectious fever himself.  Indeed, one of his own children perished to the disease and still his fervor, his steadfastness and his compassion increased.

The Damascene people saw in Father Joseph the image of Saint Paul who said: "We are afflicted in every way, but not crushed; perplexed but not driven to despair; persecuted, but not forsaken; struck down, but not destroyed; always carrying in the body the death of Jesus Christ, so that the life of Jesus may also be made visible in our bodies," (2 Cor. 4:8-10).

In Honor of his Feast Day
A Vesper Service will be offered here at 7 p.m.
With a Trisagion Service
for those who have lost their lives
during the current terror.

In 1993, the Holy Synod of the Patriarchate glorified as Saints, Father Joseph of Damascus and his Companions.   Today, as the Christians of his home country and throughout the Near East endure renewed persecution, violence, terror and oppression, we should turn to Saint Joseph of Damascus as an example to emulate, a blessing to acquire, and a steadfast intercessor before Christ our Lord and Savior.   We ask his intercession in protecting and comforting the innocent who suffer for the Faith in Syria and her neighboring countries.  We ask his intercession on behalf of those who have lost their lives that he may escort these new Christian martyrs as they enter the Eternal Paradise.  Through the prayers of the GREAT MARTYR JOSEPH THE DAMASCENE and his companions, Lord Jesus Christ our God; have mercy on us and save us. Amen.