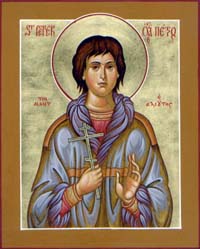 The Spanish tried to force them to renounce their Faith and subjected them to torture; Peter and a companion were singled out for especially vicious treatment. Peter and the other Aleut captives remained firm in their confession of the Faith. Peter eventually died as a result of his cruel ordeal.  The Spaniards were preparing the same fate for the others when word came that they were to be transferred to the Russians and returned to Alaska.

When he heard a first-hand account of Peter's martyrdom, Saint Herman crossed himself and said "Holy New Martyr Peter, pray to God for us!" Saint Peter the Aleut is the first recognized Saint of American birth.  After the return of the Aleut prisoners, St Herman spoke with some officers of the Russian ship; the following fragment was recorded by his disciple and it includes perhaps the most familiar quotation from St Herman.

"Do you love God?" asked the Elder. And all answered: "Of course we love God. How can we not love God?"  Father Herman answered “And I, a sinner, have tried to love God for more than forty years, and I cannot say that I perfectly love Him," and he began to explain how one must love God. "If we love someone," he said, "then we always think of that one, we strive to please that one; day and night our heart is preoccupied with that object. Is it in this way, gentlemen, that you love God? Do you often turn to Him, do you always remember Him, do you always pray to Him and fulfill His Holy commandments?"  We had to admit that we did not. "For our good, for our happiness," concluded the Elder, "at least let us give a vow to ourselves, that from this day, from this hour, from this minute, we shall strive above all else to love God and to do His Holy Will!"