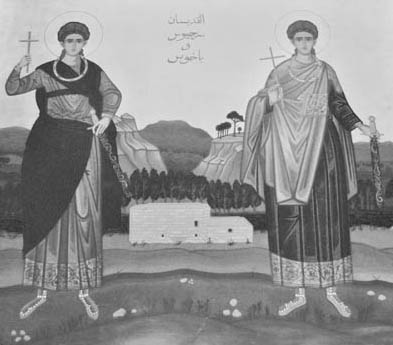 Noteworthy in the calendar of Saints is the frequent commemoration of pairs of Saints – several quickly come to mind; Sts. Joachim and Anna the parents of the Theotokos, Sts. Peter and Paul the founders of the Church at Antioch, the Martyred brothers and Princes of Rus Sts. Boris and Gleb, the physicians Sts. Cosmos and Damian, the twin brothers and Martyrs Sts. Florus and Laurus.  Among the numerous Military Saints are two Roman soldiers and Martyrs Sts. Sergius and Bacchus who we commemorate on 7 October.

The story of these two Martyred Saints is recorded in their 5th century biography titled ‘The Passion of Sergius and Bacchus’.  They were soldiers of the Imperial Roman Guard during the reign of the Emperor Galerius.  Both men were Roman citizens of noble birth and ranking officers in the Imperial Army.  Together, they converted to Christianity and secretly practiced their new Faith while continuing to serve as trusted Imperial officers.  Eventually, their Christian identity was revealed when, at the invitation of the Emperor, they avoided offering incense at the temple of the god Jupiter in Rome.

They were immediately arrested, chained and imprisoned.  The Emperor, who valued the two soldiers for their “courage, wisdom and zeal”, was greatly disappointed.  Professing the Christian Faith was an offence punishable by death and the Emperor, wanting to distance himself from the predictable outcome, had Sergius and Bacchus transferred to Mesopotamia to stand trial at the court of Antiochus, the military commander.

Sergius and Antiochus were long time friends. In fact, Antiochus obtained his rank and position as military governor thru Sergius’s intervention with the Emperor.  Antiochus could not convince his friends to renounce their Christian Faith and offer sacrifice to the Roman god’s.  He pleaded with them to avoid what he saw as a dishonorable death.  Bacchus replied that “both honor and dishonor, both life and death, are one in the same to him who seeks the Kingdom of Heaven”.  The two friends were ordered to prison at Resafa in Syria where they were soon executed. Their martyrdom was quickly marked by many miraculous events.  The persecution of Christians in the Roman Empire ended within ten years of their death.

Veneration of the new martyrs grew quickly and a shrine was soon erected to their memory at Resafa in Syria at the request of Bishop Alexander of Hierapolis.  Within a century, the shrine was expanded to a large basilica.  Patrons of the Basilica of Sts. Sergius and Bacchus at Resafa included the Roman Emperor Justinian I, the Persian Shah Khosrau II and the Ghassani King Al-Mundhir.  In the Byzantine Empire, the two soldier Saints were honored as Patrons of the Imperial Army.

Countless churches and monasteries throughout the Near East are named in honor of these two heroes of the Christian Faith.  One, the seventh century church of Mar Sarkis on the banks of the Nahr el Jaouz [Walnut River] at Kaftoun in Northern Lebanon is currently undergoing extensive restoration.  Thanks to the untiring efforts of the nuns of the Monastery of the Dormition of the Theotokos on whose property the church is located, Metropolitan George Archbishop of Mt. Lebanon and expert archeologists and restorers from the Warsaw Academy of Fine Arts and the University of Warsaw, this historic church is being meticulously restored.  The spectacular fresco icons on the church walls date from the 13th century and the church is among only twenty some churches in Lebanon with such historic murals. 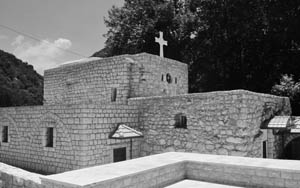 The Abbess of the Monastery of the Theotokos at Kaftoun, Mother Lucia, for whom this project is most dear, is the sister of Fr. Elia Shalhoub of our Archdiocese and she is the cousin of John Ayoub of our parish.  One of the nuns most instrumental in the historical research of the church is Sister Aquilina, the sister of Pascale Haddad of our parish.  Sister Aquilina’s research is recorded in the book “Kaftoun Monastery; History and Tradition” [in Arabic].   For additional information on the project visit the Dumbarton Oaks article at http://www.doaks.org/research/byzantine/project-grants/2009-10/waliszewski-and-chmielewski

Through both Mother Lucia and Sister Aquilina, we at St. George enjoy a special link with the Monastery at Kaftoun and the memory of these courageous soldiers and defenders of the Faith, Sts. Sarkis and Bakhos.  May the heroic steadfastness of Faith exhibited by these two Holy Martyrs inspire us and our brothers and sisters during these most difficult times as, once again, Christians face persecution and death for professing their Faith. 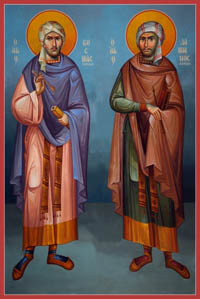 brothers, Cosmas and Damian lived in Asia during the mid-third century. They were of noble birth and well-educated in all the branches of higher learning at their home town of Ephesus.  Their mother was St. Theodota.  In their youth, they turned to the study and practice of medicine.  They offered their medical services without charge for anyone who sought their help, caring for both the wealthy and the poor.  They even cared for animals. In addition to the customary methods of curing, the brothers relied on the Name of Christ.  Together they visited the villages and cities of western Asia and were able to perform countless healings.

Cosmas and Damian  quickly attained a great reputation. Because they accepted no pay for their services, they were referred to as anargyroi, [the silverless] or the ‘unmercenaries’. In this way they brought many to the Christian Faith. When the Diocletian persecution began, the Prefect Lysias had Cosmas and Damian arrested, and ordered them to recant their faith. They remained faithful to Christ under torture and in a miraculous manner suffered no injury.  Eventually they were executed along with their three brothers, Anthimus, Leontius, and Euprepius, all five brothers died as martyrs and are recognized as Saints of the Church.  Their execution is recorded to have taken place on 27 September in the year 287.  At a later date a number of accounts grew up about Cosmas and Damian, connected in part with their relics.

The remains of the martyrs were buried in the city of Cyrus in Syria; the Emperor Justinian I (527-565) sumptuously restored the city in their honor. Having been cured of a dangerous illness by the intercession of Cosmas and Damian, Emperor Justinian, in gratitude for their aid, rebuilt and adorned their church at Constantinople, and it became a celebrated place of pilgrimage.  At Rome Pope Felix IV (526-530) erected a church in their honor, the mosaics of which are still among the most valuable art remains of the city.

The Orthodox Church celebrates the feast of Saints Cosmas and Damian on 1 November.  Sts. Cosmas and Damian are regarded as the patrons of physicians and surgeons and are sometimes represented with medical emblems.  Orthodox icons of the saints depict them vested as laymen holding medicine boxes. Often each will also hold a spoon with which to dispense medicine. The handle of the spoon is normally shaped like a cross to indicate the importance of spiritual as well as physical healing, and that all cures come from God.