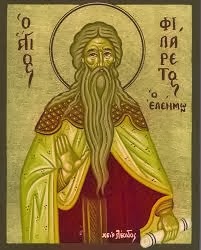 His reduced fortunes in no way changed his open-handed character; and when he met a peasant lamenting the death of his two oxen, he immediately gave him his own, leaving himself no way to till his field. When his wife and children expressed their dismay, he answered with Christ's words, 'Do not be anxious for your life, what you shall eat, or what you shall drink... but seek first the kingdom of God and his righteousness, and all these things shall be yours as well.' He asked his wife and children to be patient, for soon they would see a treasure that he was keeping hidden.

Continuing in every way as generous as he had been when wealthy, he had soon given away his horse, then his cow and calf, then his donkey (with a load of grain it was carrying at the time), to the few people he met who were poorer than himself. Without any means of feeding himself or his family, he received a generous gift of provisions from a wealthy friend; he divided the gift among his family members, then gave his own portion to the poor. He then gave away his beehives, and finally the coat from his back to a beggar who asked him for food. Thus he was left completely stripped of possessions, depending only on God to care for himself and his family.

At that time, emissaries from the Court of Constantinople passed through the neighborhood, sent out to seek a fair maiden of good family to be considered as a bride for the young Emperor Constantine VI. Philaret received them in his once-splendid house and, impressed by his virtues and those of his family, they asked two of his grand-daughters to return to the Court with them. There, the two ladies' physical and spiritual beauty shone so brightly that one of them was wed to the Emperor, the other to one of his chief courtiers. The Emperor summoned Philaret and the rest of his family to the Palace, where he appointed Philaret Consul and gave him greater riches than he had possessed in former days. The Saint, restored to prosperity, continued in generosity as before: His first act was to give a lavish feast to which he invited the poor, old and disabled of the City. He then spent his days walking the streets of the City, distributing alms to the poor, giving to all who asked with no consideration of the merits of their case. (He brought with him a servant who carried three bags of coins: one of gold, one of silver, and one of copper. When he met a needy person, the Saint reached at random into a bag and gave him a handful of coins, thus letting God decide the size of the gift).

When the Saint drew near to death, he gathered his family and urged them to distribute all the remainder of his wealth to the needy. 'My children, do not forget hospitality; visit those who are sick or in prison, watch over widows and orphans; see to the burial of those who die in poverty; do not covet the goods of others; speak no ill of anyone, and do not be glad of misfortunes that befall your enemies; always do as you have seen me do in my life, so that God will keep you under His protection.' Then, his face shining with joy, he gave up his soul to God.