“We should try to live in such a way that if the Gospels were lost,

they could be re-written by looking at us.”– Metropolitan Anthony Bloom 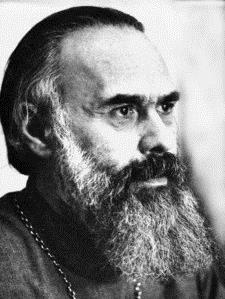 He was born Andrei Borisovich Bloom on the 19th of June 1914 in Switzerland, where his father was serving as a member of the Russian Imperial Diplomatic Corps. His mother was the sister of the Russian composer Alexander Scriabin. Molotov, Stalin’s comrade, was also a relative. Shortly before the First World War, the family returned to Russia, but soon left again for a diplomatic assignment in Persia. His vivid memories of Persian shepherds, “minute against the hostile backcloth of the vast Persian plain” while protecting their flocks, made him a convincing preacher on the parable of the Good Shepherd.

After the Russian Revolution, the family set out through Kurdistan and Iraq. When they sailed for Britain in a leaking ship, he hoped to be shipwrecked — he was reading Robinson Crusoe at the time. Instead, he was put ashore at Gibraltar where the family’s luggage was mislaid. Some fourteen years later it was returned with a bill for $1.

In 1923, the family at last settled in Paris, adopted home to thousands of impoverished Russian refugees. Here his father became a laborer while his son went to a rough school.  After reading classics, he went on to study physics, chemistry and biology at the Sorbonne School of Science. In 1939 he was qualified as a physician.

Like so many of his contemporaries, he grew up with no belief in God and at times voiced fierce hostility to the Church. But when he was eleven, he was sent to a boys’ summer camp where he met a young priest. Impressed by the man’s unconditional love, he reckoned this as his first deep spiritual experience; though at the time it did nothing to shake his atheist convictions.

Later, in the University, he decided to read the shortest Gospel, St. Mark’s. Here is his account of what happened: “While I was reading the beginning of St. Mark’s Gospel, before I reached the third chapter, I suddenly became aware that on the other side of my desk there was a presence. And the certainty was so strong that it was Christ standing there that it has never left me. This was the real turning-point. Because Christ was alive and I had been in his presence I could say with certainty that what the Gospel said about the crucifixion of the prophet of Galilee was true, and the centurion was right when he said, “Truly he is the Son of God.” It was in the light of the resurrection that I could read with certainty the story of the Gospel, knowing that everything was true in it because the impossible event of the resurrection was to me more certain than any other event of history. History I had to believe, the resurrection I knew for a fact. I did not discover, as you see, the Gospel beginning with its first message of the annunciation, and it did not unfold for me as a story which one can believe or disbelieve. It began as an event that left all problems of disbelief behind because it was a direct and personal experience.”

During the Second World War, he served as a surgeon in the French Army, and as a volunteer with the French resistance. In 1943, he was secretly tonsured as a monk, receiving the name Anthony. Since it was impractical for him to enter a monastery, the monk who was his spiritual father told to spend eight hours a day in prayer while continuing his medical work. When he asked about obedience, he was told to obey his mother. He continued to live a hidden monastic life after the war, when he became a general practitioner.

In 1948, he was ordained priest  and became the Orthodox chaplain to the Fellowship of St. Alban and St. Sergius in England. In 1953 he was appointed hegoumen, in 1956 archimandrite, then in 1962 archbishop of the newly created Diocese of Sourozh, encompassing Britain and Ireland. In 1963 he was named acting Exarch of the Patriarch of Moscow and All Russia in Western Europe.

During the long years of Soviet rule, Metropolitan Anthony played an important part in keeping the faith alive in Russia through countless BBC World Service broadcasts. Perhaps still more important were the annual BBC broadcasts of the All-Night Paschal Vigil service at the London Cathedral. As Matins began, Metropolitan Anthony would emerge from behind the iconostasis to encourage the congregation, as they stood waiting in the dark, to speak up with their responses as this would be the only Paschal service that many in the Soviet Union would hear.

For years Metropolitan Anthony was a familiar voice on British radio.  His transparent spiritual qualities and ability to speak fluently for a set number of minutes made him an instant success. At the height of his fame, Gerald Priestland, the renowned BBC religious correspondent, called him “the single most powerful Christian voice in the land.” One of his most memorable broadcasts was a discussion with the atheist Marghanita Laski in which he said that her use of the word “belief” was misleading. “It gives an impression of something optional, which is within our power to choose or not … I know that God exists, and I’m puzzled to know how you can manage not to know.”

In great demand as a speaker, Metropolitan Anthony spent much of his time preaching in non-Orthodox churches, leading retreats, giving talks and hearing confessions. He regularly spoke in hospitals, particularly about death, drawing on his experience as a cancer specialist. He received honorary doctorates from Cambridge and from the Moscow Theological Academy.

Few bishops were more accessible to their flock, but this sometimes had comical results. When one parishioner rang to say that “Peter” had died and asked for prayers, Metropolitan Anthony immediately complied, then asked when the funeral would be. “Oh, there won’t be one,” he was told. “We flushed Peter down the loo.” Peter turned out to be a parakeet.

His faded and frayed black robe seemed nearly as old and worn as he was. Once, while visiting Russia, he was lectured by a priest who had no idea that this was the famous Metropolitan Anthony and was angry to see him awaiting their special guest from London in such tattered clothing. Metropolitan Anthony accepted the criticism meekly.

“He always seemed to me an actual witness of Christ’s resurrection,” said a regular participant in the annual diocesan conference in Oxford, “not someone who believed it because he heard a report from a trustworthy source or read about it in a book, but someone who had seen the risen Christ with his own eyes. In meeting Metropolitan Anthony, I can understand why in the Church certain saints are given the title ‘Equal of the Apostles’.”  Not yet canonized a Saint, we pray that his cause inspire many and that soon he will be declared among the Saints.