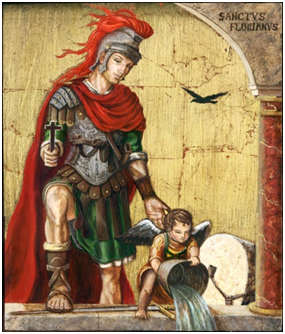 St. Florian, a convert to Christianity and a Roman soldier, was born in Austria in 250. He was a leader of a military fire brigade. Fire in Ancient Rome was an ever present danger.  There were groups of watchman who patrolled the streets watching for unsupervised fires. These official Roman firefighters had their own doctor and medical staff.  Roman firefighters were equipped with hand-operated piston water pumps. In St. Florian's time, firefighters were a critical part of the Roman military and more than 7000 highly trained men served in military fire fighting units.

St. Florian enlisted in the Roman Army, around 268, and advanced quickly through the ranks. He was officer material. His superiors said he was good with people, a real problem-solver, and a dedicated hard-worker.  Firefighting was done by special forces whose sole responsibility was fighting fire.  St. Florian, now a Captain, was assigned to lead one of these elite fire brigades.  St. Florian's unit was so successful that he advanced through the ranks to General.  Generals were often assigned to govern remote regions of the Empire.  General Florian was assigned chief administrator of such a region in the Bavarian region where he had the power to enforce the law and collect taxes.

For years the Roman Empire had persecuted Christians.  Roman law was to outlaw Christianity. Those who would not renounce their Christian faith could be sentenced to death.  Rome became suspicious when rumors floated back from Noricum that Florian was not enforcing its anti-Christian laws. When his superiors told Florian to burn the Christian churches, and their books, and to force Christians out of their jobs and send them to prison, Florian was torn between duty and faith.

The soldiers were ordered to tie a millstone around his neck and throw him into the river.  St. Florian drowned in the icy blue water.  His body was later found and he was given a Christian burial.  Since then, many legends have grown up around St. Florian.   There were reports of many miracles performed by him.  St. Florian has become the protector of firefighters.  We celebrate St. Florian and honor and thank those who protect us by serving as firefighters.

In beloved memory of

who lost their lives in the 9-alarm

Back Bay fire on March 26th.