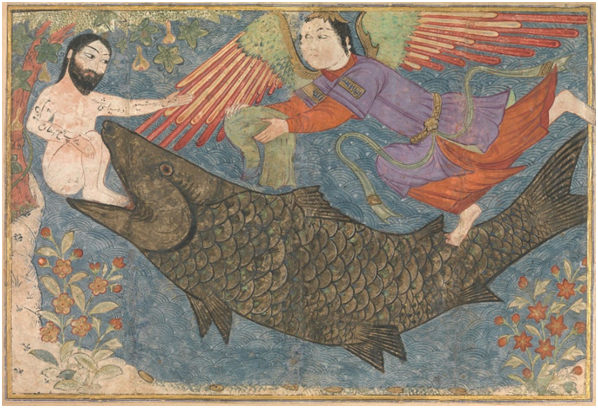 “The word of the Lord came to Jonah son of Amittai: "Go to the great city of Nineveh and preach against it, because its wickedness has come up before me." [Jonah 1:1]. Counted as one of the twelve Prophets, the story of Jonah is told in the book of the Old Testament that bears his name.  According to Orthodox tradition, based on ancient Hebrew writings, he was the son of the widow of the village of Zarephath, who was resurrected by the holy Prophet Elias [1 Kings 17:21].  The song of Jonah, “I called to the Lord out of my distress “ [Jonah 2:2-9] is part of the Sunday Matins service and it forms the basis of numerous Orthodox hymns that reflect on Jonah's time in the belly of the whale as a prototype of Christ's three day burial in the tomb. The Book of Jonah is read in its entirety at the Divine Liturgy on Holy Saturday morning.

A reluctant Prophet, Jonah is one of the Biblical characters we know best, certainly because of the fantastic story about him and the whale.  “But the Lord provided a great fish to swallow Jonah, and Jonah was inside the fish three days and three nights. [Jonah 1:17]. His various icons almost always depict him with the ‘great fish’.  The icon presented here is a Persian illumination that conveys an Oriental style more in keeping with the Mesopotamian character of his story.

Proud, stubborn, disobedient, unfaithful, a grumbler, and altogether a bad-tempered, cantankerous old curmudgeon—this was Jonah, whose name ironically means “dove”.  The Prophet Jonah seems almost comical in his relationship with God, except for one thing: the souls of over 100,000 people were at stake.  God told him to go and preach repentance to the people of Nineveh.

Considering the Ninevites as heathens unworthy of his efforts, Jonah tried to run away in the opposite direction.  Caught in a tumultuous storm and swallowed by the great whale, he learned a terrifying lesson, repented and reluctantly obeyed God.  Once in Nineveh he still had the nerve to complain to the Creator of the Universe.  But the people repented and made restitution for their sins and God forgave both Jonah and the sinful people of Nineveh.  “When God saw what they did and how they turned from their evil ways, he had compassion and did not bring upon them the destruction he had threatened.”  [Jonah 3:10]

For three thousand years, the legacy of the Prophet Jonah has been honored and revered by the Ninevites as well as among Jews, Christians and Moslems.  In pre-Christian times his burial place [in what is today Mosel, Iraq] was inside the king’s palace and was venerated by the local Ninevites as a sacred shrine.  Early Christians erected a church over his tomb and later a monastery surrounded the sacred site of the Prophet’s burial.  Many saints, among them St. Ephraim the Syrian and St. Isaac of Nineveh are associated with this monastic site.  In the Moslem era, one of the most majestic mosques in the Middle East, Jama Naballa Jonas, was erected over the Prophet’s tomb and it continued to be a place of pilgrimage for believers of the several faiths until just recently.

On Thursday, 24 July, 2014 militants of the Islamic State [formerly known as ISIS ] blew up the mosque and tomb of the Holy Prophet Jonah.  You can see a video of its desecration here http://www.npr.org/blogs/thetwo-way/2014/07/25/335192229/video-shows-islamic-state-blowing-up-iraqs-tomb-of-jonah, one person is heard crying “No, no, no. Prophet Jonah is gone. God, these scoundrels.” Because the story of Jonah prefigures the death and resurrection of Christ, one scholar remarked that “The destruction of his tomb in Mosul is therefore a direct assault on Christian faith, and on one of the few physical traces of that faith remaining in Iraq.” Another scholar noted that the destruction of the tomb shows that ISIS is willing to destroy “pretty much anything in the Bible.”

As part of the Saudi Arabian Salafi movement, the fanatics of the Islamic State seek to reestablish the Mohammadan world of the seventh century. The Salafi terrorists reject any development during the centuries after their prophet as pagan accretions that adulterated their religion.  They oppose the veneration of the graves of prophets and other holy people as idolatry.  They have only contempt for Christians and our holy sites and all Christians have fled from Mosul and the surrounding region of Nineveh after ISIS threatened to put them to the sword.  The Christian churches, monasteries, cemeteries and shrines of the region have been systematically desecrated and destroyed.  As they march across Iraq and Syria, leaving a wake of slaughter and destruction, they have set their sights on neighboring countries and already their presence has been felt in Lebanon.

At the destruction of the Prophet Jonah’s tomb, the question was asked if the outside world would do anything in response.  Unlikely.  As one scholar noted “If we don’t intervene when they are killing people, it would be kind of grotesque to intervene over a building.”

Sites are sacred because of their association with holiness.  Tombs are revered because of their connection with eternity.  Our outrage at the destruction of buildings and graves has little to do with the toppling of bricks and stones.  The true violence is against our recognition of God’s presence among us.  The Islamists’ acts of desecration will only intensify our reverence for sacred spaces and holy people.