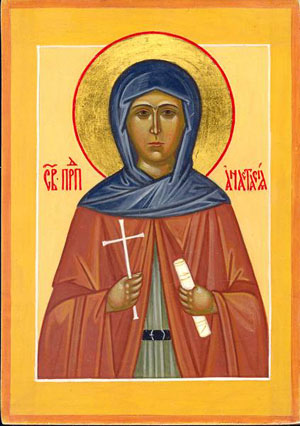 Repulsed by his persistent advances, Anastasia fled the capitol and hid out in a monastery back home in Alexandria, Egypt. When the Empress Theodora, died, Justinian began to hunt for Anastasia.  Afraid of discovery, she left the monastery and went out into the Egyptian desert where she met the Saintly Abbot Daniel.  Impressed with her holiness, Daniel welcomed her into the desert community.  Guarded by the hermit monks, she remained in peace and solitude for twenty-eight years.

In 567, aware of her approaching death, she wrote to Abba Daniel requesting that he visit her.  "Bring the shovels and come here," she wrote, anticipating her burial.  When Daniel heard this, he knew Anastasia was near death.  He went to visit her with his disciples and to give her communion and hear her last confession.  He relates that on entering her cave “her face did shine like the sun”.  Abba Daniel related the details of Anastasia’s life to his disciples after her death and her story circulated widely.

The account of her life comes to us in the Coptic-Arabic Synaxarion and by the biography of Abba Daniel of Scetis.  Her feast day is 10 March in the Greek Orthodox, Coptic Orthodox, Roman and Eastern Catholic Churches.  A Coptic monastery near Alexandria is named for her.  Some of her relics were transferred to Constantinople in 1200, and placed in the Church of Hagia Sophia.

HYMN OF PRAISE to SAINT ANASTASIA THE PATRICIAN