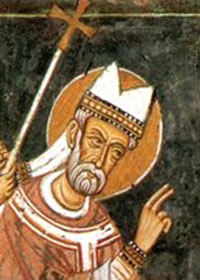 One of the Christians that Sylvester hosted was St. Timothy, bishop of Antioch, an illustrious confessor of the faith. When he arrived in Rome, no one dared to receive him because of the fierce persecutions then taking place, but Sylvester considered it an honor.

For a year, Timothy preached the gospel of Jesus Christ with great zeal, while Sylvester selflessly shared his own home. After Timothy died as a martyr, Sylvester buried his remains, but he was quickly accused of having hidden the martyr’s treasures, and the governor had him imprisoned.

In reply to the accusation, Sylvester said, “Timothy left to me only the heritage of his faith and courage.”

Because of his virtue and love for all, the faithful made him Pope against his will upon the death of Pope Miltiades in 314.  Sylvester was Pope when Constantine the Great ended the persecution of Christians and granted freedom of religion in the Empire.  The Pope personally instructed Emperor Constantine in the Christian Faith and baptized him. Unable to attend the Council of Nicaea personally, he sent delegates to represent him and uphold the Orthodox faith decreed there.

St. Sylvester became renowned as an expert on Holy Scripture and as a staunch defender of the Christian Faith. When the period of religious persecution had ended, the Jews arranged a public debate to determine which faith was true.  Emperor Constantine and his mother, the holy Empress St. Helen, were present together with a large crowd.

St. Sylvester spoke for the Christians, and the Jews had one hundred and twenty learned rabbis led by Zambres. Quoting the sacred books of the Jewish Bible, St. Sylvester convincingly demonstrated that all the prophets foretold the birth of Jesus Christ from the all-pure Virgin, and also His voluntary suffering and death for the redemption of the fallen race of humanity, and His glorious Resurrection.

The saint was declared the victor in the debate. After prolonged discussion, Zambres and the other Jews came to believe in Jesus Christ, and they asked to be baptized.

St Sylvester guided the Church for more than twenty years, earning the esteem of his flock. He died peacefully in old age in the year 335.