Great-Martyr Theodore the General of Heraclea 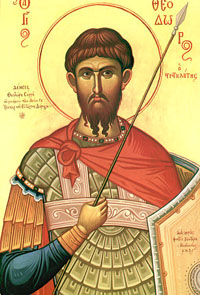 When the Emperor came to Heraclea, General Theodore met him with all honor, and the Emperor in turn praised Theodore for his service to the Roman state. The Emperor Licinius then publicly invited Theodore to make sacrifice to the gods. Theodore asked that he be given the images of most venerable gods, made of gold and silver, to venerate them at his home, and promised that the following day he would return and honor them before all the people. The Emperor, thinking that he had succeeded in restoring Theodore to paganism, gladly agreed.

That night the Saint smashed all the idols he had taken home, and distributed the gold and silver pieces to the poor. When this was discovered, Theodore gladly admitted his deed and confessed Christ boldly. The Emperor, in a fury, had the Saint subjected to many tortures, then crucified. On the cross, he was subject to further torments before being left on the cross for dead.

The next day Emperor Licinius sent soldiers to take the body and throw it in the sea.  To their amazement they found the Saint alive, his body perfectly intact. Through this, many spectators and some of the Emperor's own soldiers turned to Christ.  Seeing that the Saint, far from renouncing Christ, was leading others to Him, the Emperor promptly had him executed. The holy relics of the General were taken to his ancestral home where they worked so many miracles that the town soon came to be known as Theodoropolis.