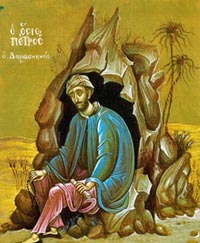 As a renowned preacher, he traveled throughout his diocese teaching the True Faith and warning his fellow Christians about the heretical teachings of Islam. Arrested for castigating the heretical doctrines of the Muslims, Saint Peter was imprisoned and tortured. His tongue was cut out and he was exiled to South Arabia. Miraculously, he was able to regain his voice and in exile in Arabia, he continued to teach the Orthodox Faith and to serve the Divine Liturgy while living an ascetic life in the desert.

Once again, he was arrested, this time by order of the Caliph Walid and charged with blasphemy against Mohammad and the religion of the Muslims. St. Peter was returned to prison where his captors tortured, blinded, crucified, and finally beheaded him.

As a sign of his deep personal faith and compassion towards his captors, we have the following from his writings “Such are the souls of the saints: they love their enemies more than themselves and in this age and in the age to come they put their neighbor first in all things, even though because of his ill-will he may be their enemy. They do not seek recompense from those whom they love, but because they have themselves received they rejoice in giving to others all that they have, so that they may conform to their Benefactor and imitate His compassion to the best of their ability; ‘for He is bountiful to the thankless and to sinners’ (cf. Luke 6:35).”

St. Peter of Damascus can serve as a model and example for us today in light of the countless horrific acts of hatred and violence executed by the fanatical followers of Islam.