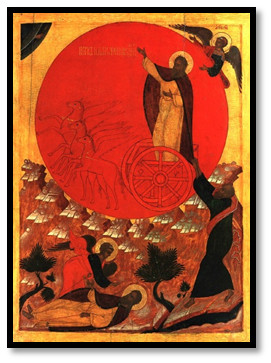 At the end of his years on earth, he was carried bodily to heaven by a flaming chariot; with St. Enoch [Gen. 5:24] he is one of the two ever to be taken bodily to heaven without first dying and being raised. He and Moses appeared standing with Christ at the Transfiguration on Mt. Tabor [Matthew 17:1–9, Mark 9:2-8, Luke 9:28–36]. His name means 'The Lord is God'.

The Holy Prophet Elias (Ilias) (Elijah) – was born 900 years before the birth of Jesus Christ.  From his youth he dedicated himself to the One God, settling in the wilderness to spend his life in fasting and prayer.  Called to prophetic service in opposition to the Israeli king Ahab; the Prophet Elias became a fiery zealot of true faith and piety.  During this time, the Israeli nation had fallen away from the faith and abandoned belief in the One God.  They worshiped the pagan god Baal.  The worship of Baal led the Israeli nation into complete moral decay.  The Prophet Elias declared that as punishment, there would then be neither ‘rain nor dew upon the ground’ and a drought would end only through his prayers.  A drought and famine did plagued the land and the people suffered from the incessant heat and hunger.  The Lord, in His mercy, was prepared to forgive them and send rain if the Israelites repented and returned to the worship of the one true God.

After three years of drought, Elias confronted King Ahab.  Elias demanded that all Israel gather at Mount Carmel along with the pagan-priests of Baal.  When the people gathered, the Prophet Elias ordered that two altars be built: one – for the pagan-priests of Baal, and the other – for the Prophet Elias in the service of the True God. "Upon whichever shall come down upon it fire from the heavens, that one will be shown to have the True God, – said the Prophet Elias, – and all shall be obliged to worship Him, and if not invoking Him shall be given over to death".  The priests of Baal rushed to offer sacrifice: they called out to the idol from morning until evening, but in vain – the heavens were silent.  Towards evening the holy Prophet Elias built his altar from 12 stones – the number of the tribes of Israel; he placed the sacrifice upon the firewood, gave orders to dig a ditch around the altar and commanded that the sacrifice and the firewood be soaked with water.  When the ditch had filled with water, the fiery prophet turned to God with a prayer and asked, that the Lord send down fire from the heavens to teach the wayward Israelite people and turn their hearts to Him.  Through the prayer of the prophet, there came down fire from the heavens and it fell upon the sacrifice, the wood, the stones and even the water. The people fell down to the ground, crying out: "In truth the Lord is the One God and there is no other besides Him!”  Then the Prophet Elias began to pray for the sending down of rain. Through his prayers, the heavens opened and there came down an abundant rain, watering the parched earth.

In commemoration of the miracle of fire at the altar that Prophet Elias erected to God, it is customary to light bonfires on the eve of his feast.  This custom is especially practiced by Christians in the Middle East.  In Lebanon and Syria these fires can be seen in the evening burning on the mountain tops above the villages and towns.

The iconographic tradition portrays the Prophet Elias rising up on a chariot with fiery wheels, which are encircled on all sides with flames and harnessed to four winged horses.  The icon of St. Elias here at St. George shows the assent of the Prophet Elias into the heavens and was painted by the renowned Albanian iconographer Nicholas Melo.