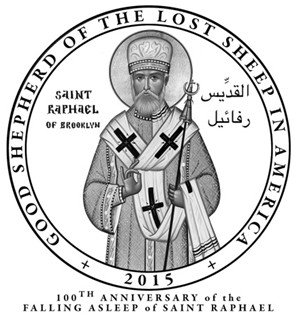 Born in Beirut on 8 November 1860, the Feast of the Archangels, his parents named him after the Archangel Raphael.  Originally from Damascus, his father and pregnant mother had recently fled violent anti-Christian persecution that plagued that city.  In a period of just a few days, fanatic Moslems had murdered several thousand men, women and children in Damascus.  Among the murdered was St. Joseph of Damascus [commemorated on 10 July] the parish priest and friend of the Hawaweeny family.  Following the restoration of calm in Damascus, the Hawaweeny family returned home.  A number of priests were among St. Raphael’s family including his maternal grandfather and an uncle, Fr. Elias Ayoub.  St. Raphael was educated at the local Orthodox schools and in 1879 he was tonsured a monk and entered into the service of Patriarch Hierotheos of Antioch.

The Balamand Seminary had been closed since 1840, but the young monk was offered a scholarship at the Patriarchal seminary at Halki in Constantinople. Returning to Syria with a theological degree, St Raphael became an assistant to Gerasimos, the new Patriarch of Antioch, traveling and preaching on his behalf.  After further studies in Kiev, he transferred to the jurisdiction of the Patriarchate of Moscow and served as professor of Arabic studies and mission strategy at the Theological Academy in Kazan.  At that time the Orthodox Christians of the Middle East received considerable financial aid and theological training from the Russian Tsar and from the Orthodox Church of Russia.
In 1895 he was sent to the United States to shepherd the Arab Orthodox Community in New York, which was without a church or a priest. He quickly consecrated a chapel dedicated to St. Nicholas and with great energy set about the work of shepherding his flock there; but he was concerned not only for them but for the countless Arab Christian immigrants scattered through North America, who were without a pastor and in danger of falling away from the Church or abandoning religious life altogether.  He traveled widely throughout the continent, visiting, counseling and serving Arab Christians, preaching, celebrating marriages and baptisms, receiving confessions and celebrating the Divine Liturgy, usually in private homes.  On several occasions he visited Boston and encouraged the leaders of the Arab Orthodox community here to found a parish and welcome a priest.  He assigned Fr. George D. Maloof, from St. George Church in Dier ElGazaal, Zahle as the first pastor of the Boston Orthodox community.

In 1898 he published the first Orthodox prayer book in Arabic to appear in the New World. In 1899, he made a seven-month journey through forty-three American cities, including Boston, seeking out the "scattered sheep" of the Church in America. His services were attended not only by Arabs but by Russians and Greeks, all of whom at that time were part of the Russian Orthodox Mission to North America. During this entire period, he held the official rank of Archimandrite, though his work and duties exceeded those of most bishops.
In 1901, Patriarch Meletios was elected to the See of Antioch, the first Arab to occupy the patriarchal throne for 168 years. Several proposals were made to elect Archimandrite Raphael to a see in Syria; but he refused all such offers, pointing out the Orthodox people's great and little-met needs in North America. In 1904, the Moscow Patriarchate elected him Bishop of Brooklyn, the first Orthodox bishop to be consecrated on American soil. He redoubled his already impressive pastoral work, ordaining priests to the many new parishes that he had founded, and assisting Saint Tikhon (then Bishop of North America) in the care of his huge diocese. In 1905 he laid the foundation of the Monastery of St Tikhon in Pennsylvania.  Bishop Raphael appointed his friend, Fr. George D. Maloof of Boston to undertake several extensive mission trips on his behalf.  Like his father in Christ, Fr. George crisscrossed the country ministering to the Arab Orthodox immigrants and establishing new communities.
The bishop saw the importance of integrating the faithful into the life of their new homeland, and was an early advocate of the use of English in American Church services. When the Service Book [ the first English translation of the Church's services] was published in 1906, he advocated its use in all his parishes.
In 1912, St Raphael was found to be suffering from heart disease, but continued his exhausting pastoral work for two more years. In 1915 he was finally unable to continue, and reposed after two months' illness.
When his relics were transported in 1998 from Brooklyn to Antiochian Village in Ligonier, PA, they were found to be incorrupt, and in 2000 he was canonized a Saint of the Orthodox Church and a patron of the Church in North America.
In North America St Raphael is commemorated on the anniversary of his repose: 27 February, he is also commemorated with the Synaxis of Saints of North America on the Second Sunday after Pentecost. The Patriarchate of Antioch also commemorates him on the Saturday before the Synaxis of the Archangels (8 November).  This month we at St. George will commemorate the Feast of St. Raphael with a Vesper Service on Friday evening 6 November at 6:30 and on Saturday morning, 7 November with Orthros at 9:00 and the Divine Liturgy at 10:00.