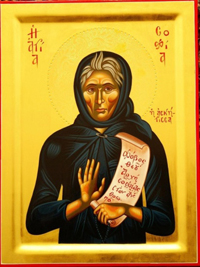 Sophia was left to care for their newborn son. Not long afterward her beloved only son also died. Turning from the world, she placed all her trust in God, spending her time in solitary prayer on a mountain near her town.

In 1919 she arrived in Greece as part of the “exchange of populations” between Turkey and Greece. Not long after her arrival, the Most Holy Theotokos appeared to her in a vision and said, “Come to my house.” When Sophia asked her where to find her house, the Virgin replied, “I am in Kleisoura.” Heeding these holy instructions, Sophia moved to the Monastery of the Nativity of the Theotokos in Kleisoura in northern Greece, where she remained for the rest of her life.

She never took monastic tonsure, but lived in the monastery kitchen. She slept only two hours a night, giving over the rest of the night to prayer. She dressed in old, tattered clothes, but if anyone tried to give her better clothing, she would give it away to the poor. Similarly, if anyone gave her money, she would hide it until she could give it to someone in need. She ate very little and showed no interest in food. Worldly people called her “Crazy Sophia,” but those with discernment saw her as a living saint. She was endowed with gifts of healing and prophecy: when visitors would come to her she would greet them by name even if she had never met them before, and would describe their problems, offering counsel.

In 1967 she was healed of a painful, life-threatening illness through a vision of the Holy Theotokos, the Archangel Gabriel and St. George. She fell asleep in the Lord on May 6, 1974, after a long life given over to prayer, asceticism and poverty. Her relics are enshrined in the monastery where she spent most of her life. To those who came to her she taught:

The fear of God makes a person wise. What is the fear of God? Not that one should be afraid of God, but to be afraid to sadden someone, to harm someone, to do them no wrong, and to not make accusations. This is wisdom. After all this, God will illumine you as to what to do in your life.