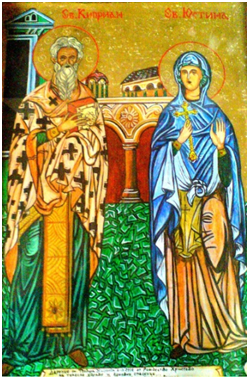 The life of ST. CYPRIAN, surnamed the Magician, is a perfect example of divine grace and mercy. A native of Antioch, he was the son of superstitious idol worshiping pagan parents who dedicated him to the devil and educated him in the impious supernatural practices of idolatry, sorcery and the black arts. As a young man he studied black magic at Mount Olympus, Phrygia, Egypt and India which at that time were famous for teaching magic and superstitious pagan arts. When Cyprian had mastered all the teachings of these schools of error and delusion, he set out to apply his skills by conjuring demonic assaults and casting of spells. In his demonic practices he discovered that Christian women were particularly immune to his powers.

At that time a wealthy pagan official in Antioch enlisted Cyprian in seducing a beautiful young woman whom he coveted. ST. JUSTINA, was born a pagan, converted to the Christian faith and then brought her father and mother to the knowledge of Christ. Justina repeatedly rebuffed her unwelcomed suitor’s advances and Cyprian tried every secret he knew to conquer her resolve. Justina protected herself by prayer, watchfulness, and mortification against all his magic and the power of his spells.

Her biographer, St. Photius says that, “She defeated and put to flight the devils by the sign of the holy cross”. In his own Confession, Cyprian writes that “She armed herself with the sign of Christ, and overcame the invocation of the demons.” St. Gregory Nazianzen adds: “Suppliantly beseeching the Virgin Mary that she would aid a virgin in danger, she fortified herself with the medicine of fasting, tears, and prayers.”

Unable to overcome the superior power that Justina called on, Cyprian began to doubt the power of the evil spirits, and resolved to abandon their service. Satan, enraged to lose one by whom he had conquered so many souls, assaulted Cyprian with every torture and brought him almost to the brink of despair at the sight of his past crimes.

In his agony, God inspired Cyprian to seek out a holy priest named Eusebius. With the guidance of this priest Cyprian was comforted and encouraged in his conversion. On the following Sunday, Eusebius brought Cyprian to the church. Cyprian was struck by the awful reverence and pious devotion with which this act of the divine worship was performed, that he later wrote: “I saw the choir of heaven, of men or of angels, singing to God, adding at the end of every verse the word Alleluia, so that they seemed not to be human.” Every one present was astonished to see Cyprian introduced by a priest among them, and the bishop was scarcely able to believe his own eyes; or at least to be persuaded that his conversion was sincere. But Cyprian gave him a proof the next day by burning all his magical books, giving his whole wealth to the poor and becoming himself a catechumen.

After due instruction and preparation, Cyprian received the Sacrament of Baptism from the hands of the bishop. His friend, Agladius, who had been the suitor to the holy virgin Justina, was likewise converted and baptized. He also renounced his possessions and cared for the poor by becoming a monk at Antioch. Justina herself was so moved at these wonderful examples of the divine mercy that she cut off her hair in order to dedicate her virginity to God, and disposed of all her possessions to the poor. She became the head of a community of nuns.

St. Gregory Nazianzen beautifully describes the astonishing change in Cyprian, his edifying behavior, his humility, modesty, love of God, contempt of riches, and diligent practice of prayer. He tells us, that, out of humility Cyprian asked to be employed as the sweeper of the church. Later he was made door-keeper. In time, Cyprian was ordained to the priesthood, and, after the death of Bishop Anthimus, was elected to the episcopal throne as Patriarch of Antioch.

During the great Roman persecution of the Church, Bishop Cyprian, the nun Justina and the monk Agladius were all martyred for the Faith in the year 304.

If the errors and disorders of St. Cyprian show the degeneracy of human nature corrupted by sin, and enslaved to vice, his conversion displays the power of grace and virtue to repair it. How strangely the image of God is disfigured in man by sin appears by the disorders of his spiritual faculties, the understanding, and will in which the divine resemblance was stamped in the creation.

*The Empress Eudocia, wife of Theodosius the Younger, wrote the history of SS. Cyprian and Justina in a beautiful Greek poem consisting of three books.